Striking photos have emerged from the Invasion Day protests rocking Australia’s biggest cities – with a young female protester overcome with emotion at a Melbourne rally.

Thousands of protesters took to the streets on Thursday for marches in every state and territory across the country to protest against Australia Day being held on January 26, and for Indigenous rights.

In Melbourne, Greens Senator Thorpe headlined a protest on the steps of the Victorian Parliament and took to the stage clutching a war stick to loud cheers from the huge crowd in the midday heat.

The star of Melbourne’s treaty movement inflamed emotions with her declaration that Australia was in a ‘war’ with Indigenous people.

And at one point, the intensity of the day proved too much for one of the protesters – holding a sign saying ‘no pride in genocide’ – who burst into tears and had to be consoled.

The woman, wearing a kangaroo skin cape, wiped away tears as a friend put a comforting arm around her. 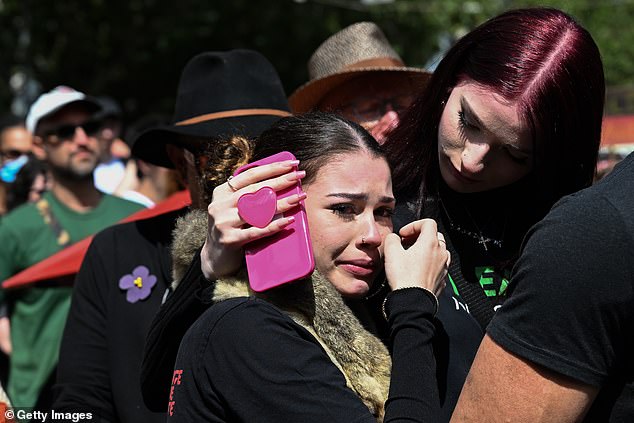