Dramatic video shows the moment a terrified couple had to flee their RV with their two dogs as a tornado touched down near their mobile home in Texas.

Zachary Peck-Chapman filmed the situation outside their RV parked in Orange, Texas and documented how they ran with their two dogs to a nearby water-filled ditch to take cover during the life-threatening storm.

He tweeted that it was the ‘scariest moment of our lives,’ noting: ‘We feel blessed to be alive and to have our tiny home on wheels in tact.’

More than a dozen tornadoes struck down in Texas and Louisiana on Tuesday, leaving windows and roofs blown off buildings, destroying a Houston-area nursing home and injuring three people in a mobile home park in Louisiana.

As of Wednesday morning, nearly 42,000 people throughout the two states were without power. 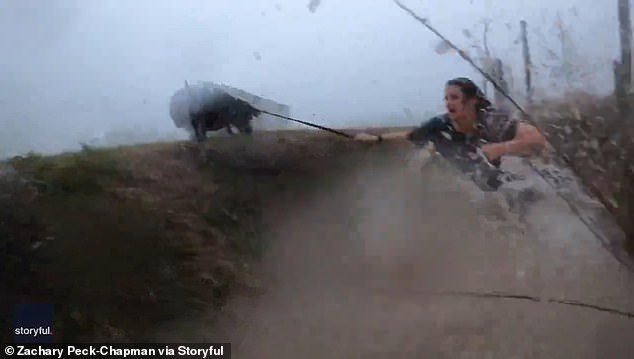 Terrifying video posted online shows the moment a couple in Orange, Texas had to jump into a water-filled ditch with their dogs to escape a tornado