The death toll from a series of devastating tornadoes that tore through Alabama, Georgia and Kentucky on Thursday night has risen to nine, with authorities warning it could still rise.

The unseasonal storms cut their way through multiple counties, carving out 20-mile wide paths in some cases.

At least 30 tornadoes were counted, with some reaching 165mph.

Seven people died in Alabama, and two in Georgia – one government official, assessing the damage, and another a five-year-old child who was hit by a falling tree in a car. The adult he was with in Butts County, near Jackson Lake, suffered serious injuries and was taken to hospital. 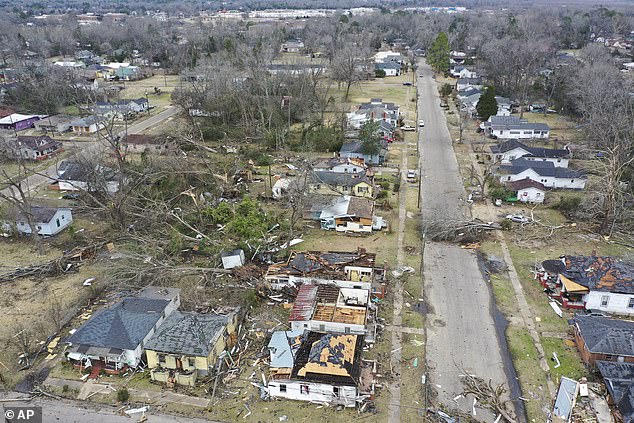 Trees are uprooted and houses destroyed in Selma, Alabama on Friday after a tornado whipped through the town on Thursday night

Brian Kemp, the governor of Georgia, said on Friday morning that his state had endured a ‘tragic night’.

‘The storm moved all across our state unfortunately, it’s been a tragic night and morning in our state,’ he said.