Pauline Hanson ripped into into rugby star turned politician David Pocock in a fiery speech on the floor of the Senate, giving him the rude new nickname ‘Doormat Dave’.

In a speech expressing her fiery anger at the hasty passing of the Albanese Government’s new industrial relations bill on Tuesday night, the One Nation Senator shrieked at Mr Pocock.

‘There’s an article in the Sydney Morning Herald today, with Senator Pocock telling readers that he wrote ‘DWYSYWD’ in his rugby locker,’ Ms Hanson said.

‘That wasn’t the case, was it? That hasn’t happened. ‘Doormat Dave’s’ word means nothing,’ she yelled. 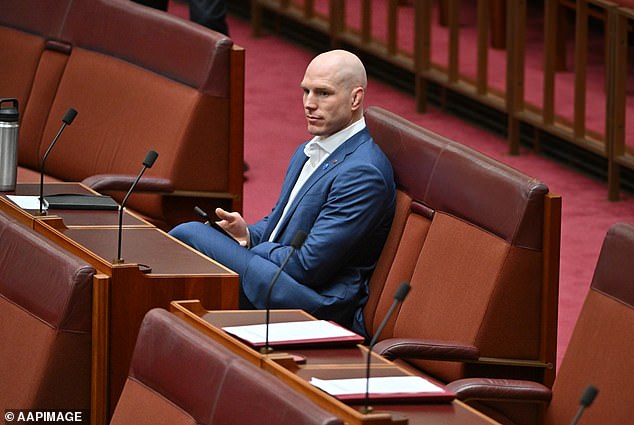 Independent senator David Pocock is pictured in the Senate chamber at Parliament House in Canberra on Monday, November 28, 2022

At this point, with the Senate having been momentarily stunned into silence, Labor Senator Catryna Bilyk objected to Ms…