Two major suspects are behind bars over the brutal alleged execution of another man, as a ferocious fire that destroyed seven cars and burned four others was linked to the killing.

A man and woman were taken into custody on Thursday two days after a 38-year-old Inala man was allegedly shot dead in the front yard of a Cliveden Avenue home in Brisbane’s south.

He died after being struck once in the chest at close range, police will allege. 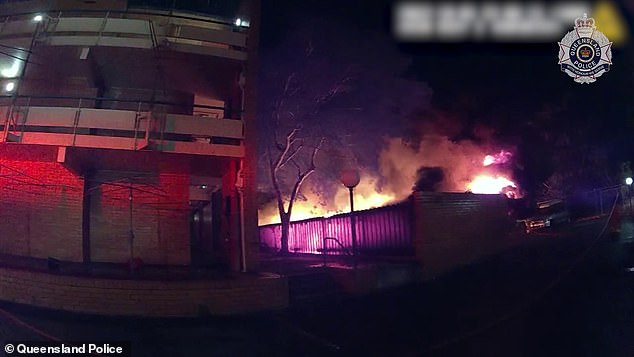 Two major suspects are behind bars over the brutal early morning execution of another man, as a spectacular vehicle fire was linked to the killing

Queensland police released dramatic footage of vehicle fires burning out of control at an apartment block at Gladstone Road, Dutton Park after 11pm on Wednesday.

One of the cars was understood to be an 2016 Audi A3 police say was used as a getaway car following the shooting murder the previous morning.