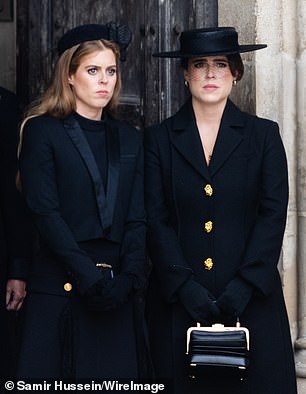 Eugenie (right) and Beatrice at the Queen’s funeral

As part of the deal to allow TV access to the Queen’s funeral, Buckingham Palace insisted that specific personal scenes never be broadcast again.

The banned footage includes Edward and Sophie discreetly weeping in Westminster Abbey, Eugenie and Zara wiping their eyes, George wiping and scratching his nose, a courtier removing the bolts from the Imperial Crown atop HM’s coffin, and the casket being lowered into the crypt.

Now Paris’s hippest and most-watched political chat show Quotidien has gleefully seized the list, replaying every ‘forbidden’ moment to its millions of viewers in France, Belgium and…