Tory MP and ex-soldier Tom Tugendhat has shared a video of the moment he was ‘followed’ by a herd of cows as he walks through a field.

Mr Tugendhat, 49, posted a short clip of the encounter to Twitter on Sunday, telling his feed: ‘I’m being followed.’

The new Minister of State for Security, surrounded by a herd of cows walking in his direction, accused the cattle of ‘outflanking’ him. He joked the encounter was an example of ‘crowd control.’

The video comes as livestock encounters are seemingly gaining popularity across the UK. Social media users have started sharing stories of livestock attacks and brushes with death in harrowing detail.

Last month, a campaign was launched lobbying for new laws to protect walkers from ‘killer cows’ in the countryside.

The campaign demands insurance for all farmers who keep livestock, cattle to be separated from walkers on National Trails and a national database of cow attacks. 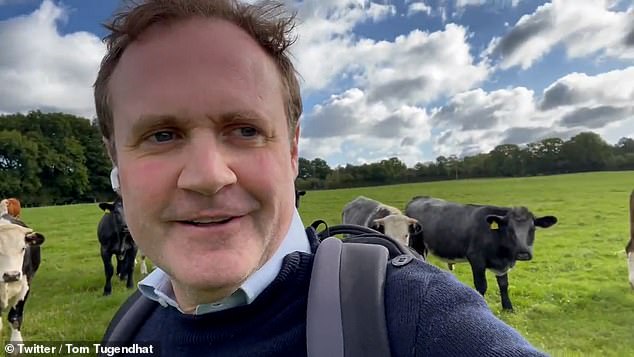