InfoWars conspiracy theorist Alex Jones was grilled on the stand for calling the judge sitting next to him a ‘tyrant’ with ‘lasers coming out of her eyes’  during his Sandy Hook hoax trial.

Jones, 48, seemed wildly uncomfortable as he took the stand on Thursday to answer questions about Judge Barbara Bellis, who is also presiding over the defamation trial.

The loud-mouth conspiracy theorist was often found squirming in his chair, his face blush pink, and rapidly blinking as he tried to avoid any eye contact with Bellis, as the Sandy Hook Attorney Chris Mattei grilled him.

‘And you’ve called this judge a tyrant, correct?’ Mattei asked him, to which he agreed. ‘You actually use that word a lot with your audience, you call people tyrants, don’t you?’

After a long pause, Jones replied: ‘Only when they act like it.’ 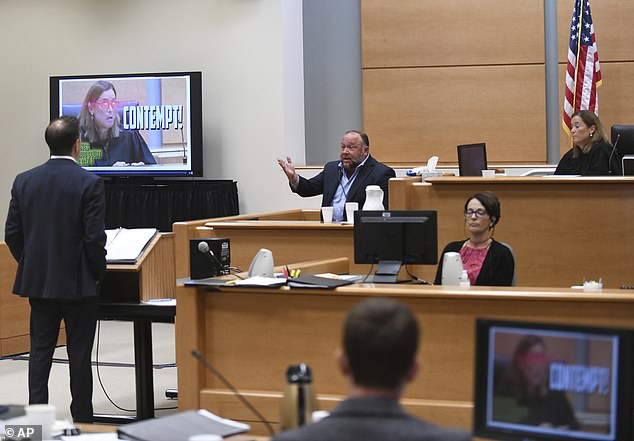 Alex Jones, 48, seemed wildly uncomfortable as he took the stand on Thursday to answer questions about calling Judge Barbara Bellis a ‘tyrant.’ Bellis is…