A US destroyer and a Canadian frigate sailed through the Taiwan Strait on Tuesday in the latest joint operation aimed at reinforcing the route’s status as an international waterway.

The United States has long used ‘freedom of navigation’ passages through the Taiwan Strait to push back against Chinese claims and Western allies have increasingly joined these operations.

The USS Higgins, along with the Royal Canadian Navy’s Halifax-class frigate HMCS Vancouver ‘conducted a routine Taiwan Strait transit… in accordance with international law’, the US Navy’s Seventh Fleet said.

‘The ship transited through a corridor in the Strait that is beyond the territorial sea of any coastal State,’ they continued, though Beijing’s official position is that the Strait is part of their territory.

It comes after President Joe Biden was asked in an interview whether US troops would defend Taiwan and replied ‘yes’, if it were ‘an unprecedented attack.’ 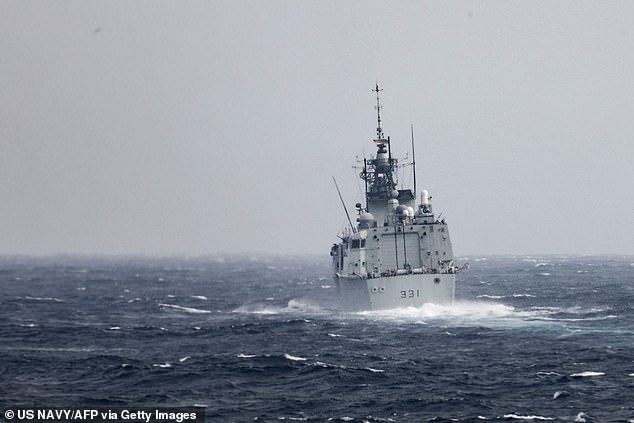 A photo of the Royal Canadian Navy…