The mourner seemingly blanked by a man welcoming visitors to Westminster Abbey for the Queen’s funeral is the wife of the Argentine ambassador to the UK, MailOnline can reveal.

Alessandra Viggiano Marra, who is also a diplomat herself, became something of a viral sensation for her less-than-impressed reaction to not getting a handshake when entering the church.

TV footage from the ceremony showed a doorman greeting a number of guests to the venue by shaking their hand.

When Ms Marra, an embassy minister, then approached the entrance she reached out her palm expecting a similar acknowledgment – but the man appeared to brush her hand aside with his left arm.

The diplomat then seemed to mutter under her breath as she walked into the abbey for the service.

On social media, many pointed out that the incident will have been seen by some four billion people, who had been predicted to watch ‘the biggest live TV event in history’. 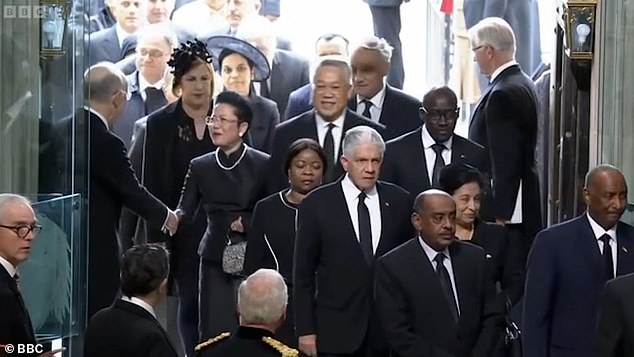