Nurses who are filling in for those on strike in Minnesota are being paid $8,000 for five days work, it has emerged – as the striking locals warn that their replacements pose a risk to patients.

An estimated 15,000 Minnesota nurses went on strike on Monday in protest at pay and staffing shortages, in the largest private-sector nurses’ strike in U.S. history.

In response, hospitals bussed in nurses from other states, and recruiters sought rapid replacements.

At Abbott Northwestern in Minneapolis, a coach full of replacement nurses was seen arriving, just as striking nurses were readying their barricades.

Online recruiters were advertising for registered nurses, who would be paid $8,000 for the duration of the Minnesota protest, CBS reported: the three days of the strike in addition to two days of training. 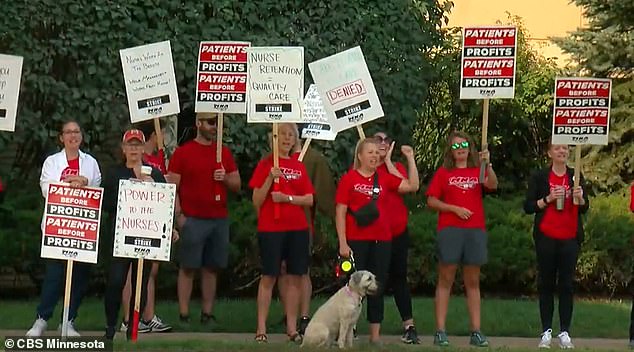 Striking nurses are pictured on Wednesday in Minnesota

Striking nurses said the replacement healthcare professionals were not up to standard.

‘They don’t know our policies,…