Ex-president Donald Trump’s go to personal lawyer Alina Habba has continued her offensive against officials who orchestrated the FBI’s raid on Mar-a-Lago on Monday.

‘They needed a little drama, so they throw this out there. They go to the judge that had recused himself in my Hillary case a month ago,’ Habba told Fox News host Jesse Watters during an appearance Friday.

‘I would like to know why he recused himself in that case, but then he was able to sign this warrant. I want to know that.’

Habba was referencing the fact that on June 22, magistrate Judge Bruce W. Reinhart recused himself from a lawsuit involving Trump and Hillary Clinton.

The 45th president is suing Clinton and other prominent Democrats over Russia collusion allegations. 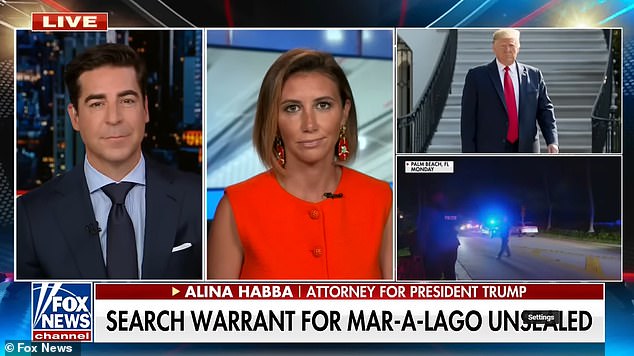 During an appearance on ‘Jesse Watters Primetime,’ Alina…