Republican Rep. Lauren Boebert had her mic cut on the House floor Friday as she blasted the Democrats’ Inflation Reduction Act.

‘You are sacrificing American families at the altar of climate change. You’re using the power of the federal government for armed robbery,’ Boebert insisted.

The $370 billion bill is expected to pass the House with only Democratic votes later Friday afternoon.

It includes a number of green energy and healthcare provisions and provides funding to bolster the workforce at the Internal Revenue Service.

The Colorado Republican argued that encouraging inflation data was evidence that the bill didn’t need to be passed.

‘Mr Speaker, isn’t it so? Joe Biden himself said inflation rates is at 0 percent. So what the heck are we doing here? Why are we passing the so-called Inflation Reduction Act if it’s at O percent,’ Boebert said.

‘The gentlewoman’s time has expired,’ the chair said, banging a gavel, interrupting the Colorado congresswoman. 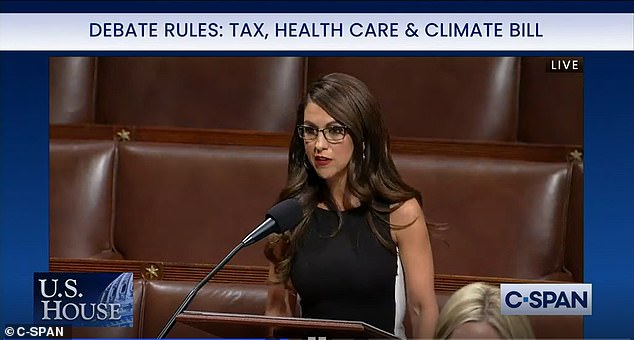