On a roasting day in California, a former television repairman named Bob Nelson drove his truck into the desert to perform a bizarre funeral ritual.

He had left behind four human corpses, crammed into a metal cylinder and stored in a Los Angeles crypt.

For months, Nelson had attempted to preserve them in dry ice and liquid nitrogen but his attempts had failed.

He was now going to abandon the bodies in the crypt.

But first, to salve his conscience, Nelson staged a private ceremony of farewell in the desert. 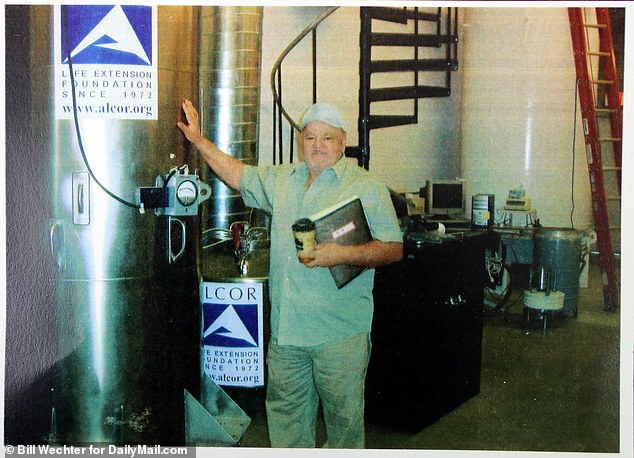 Bob Nelson had been raised in a Mafia family and worked his way up to being President of the Cryonics Society of California (pictured) Bob Nelson with Dr. Bedfordís modern cryonic tank in 2014

He muttered a few words — less in prayer than apology –— and headed back to Los Angeles.

Though he was brought up in a Mafia family, Bob Nelson was not a serial killer and these corpses were not evidence of murder.

Quite the opposite: the year was 1970 and this was the latest…