Phoenix Sun center Brittney Griner, a two-time Olympic Gold Medal winner and WNBA All-Star has been arrested at a Moscow airport after she was allegedly caught with a vape pen filled with cannabis.

The arrest took place sometime last month, with an exact date not specified. Griner is believed to remain in custody in Russia on drug smuggling charges.

After flying in from New York, the 31-year-old basketball player was detained at the Sheremetyevo international airport after drug-sniffing dogs were drawn to her luggage, according to InterFax Russian news agency.

After the dog identified the bag, a customs agent used ‘fluoroscopic equipment’ to scan the contents and discovered the vape cartridges. 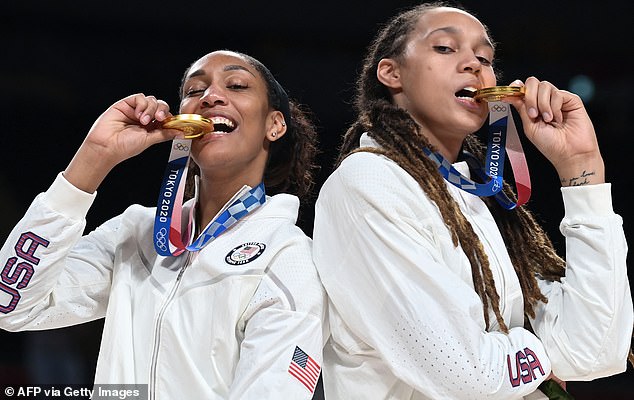 Brittney Griner, right, and A’ja Wilson seen here checking the quality of her 2020 Olympic gold medal, which she help win for the U.S. Women’s Basketball team