The governor of New York has refused to cave to pressure to shut the city down, insisting on Friday that vaccination and precaution was the best way to combat the COVID-19 surge.

Kathy Hochul spoke amid an alarming rise in cases in the city, and the state.

On Friday the statewide positivity rate was 7.98 per cent – up from 6.58 per cent on Thursday.

Yet Hochul said that a return to the lockdowns of spring 2020 and winter 2020-21 were not the answer this time, with the vaccine in place and hospitalizations stable.

‘This spreads quickly, but it’s not as dangerous.

She said she wanted people to continue ‘their regular activities’ and encourage tourists.

‘I don’t want this economy to shut down again. It’s just so painful. I don’t want kids to stop going to school.’ 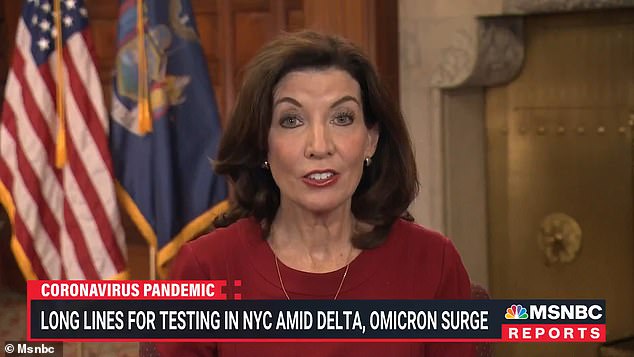 Kathy Hochul, the governor of New York, on Friday said she did not want to return to lockdowns of 2020 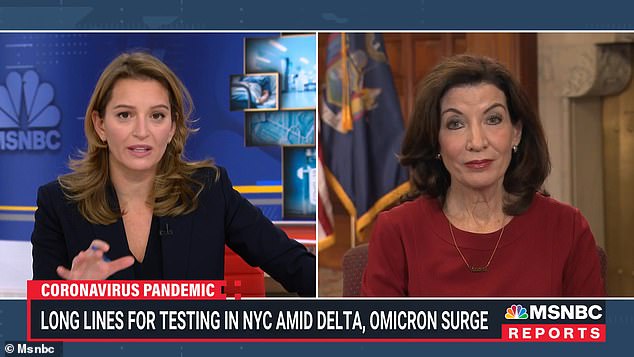 She tweeted: ‘I don’t want to have this artificial suppression based on fear, when we are in a far better place than we were so many months ago with the tools we need, the weapon we need – and that is the booster shot, in particular.’ 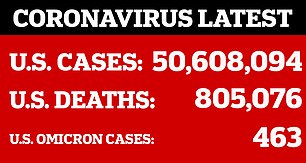 ‘We have the tools to fight this virus. Wear a mask. Get vaccinated. If you’re fully vaccinated, get your booster as soon as you can.’

New York state has a significantly higher level of vaccination than the national average.

Yet the high level of vaccinations, and Hochul’s wish to keep the city and state economically vibrant, has not stopped serious disruptions to the state.

Restaurants and bars are not being forced to close, but several are, due to either staff sickness or customers staying away.

And several Broadway shows have closed.

The Radio City Rockettes have announced they’ve canceled the remainder of their scheduled performances this season due to COVID-19. 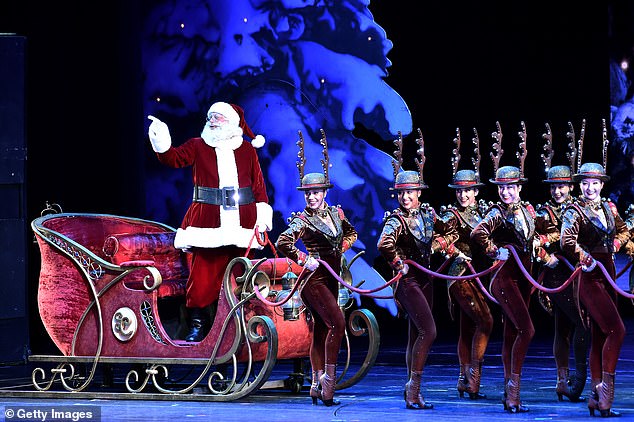 The Rockettes are seen pulling Santa Claus on to the stage as part of their festive show. The rest of the run has now been canceled 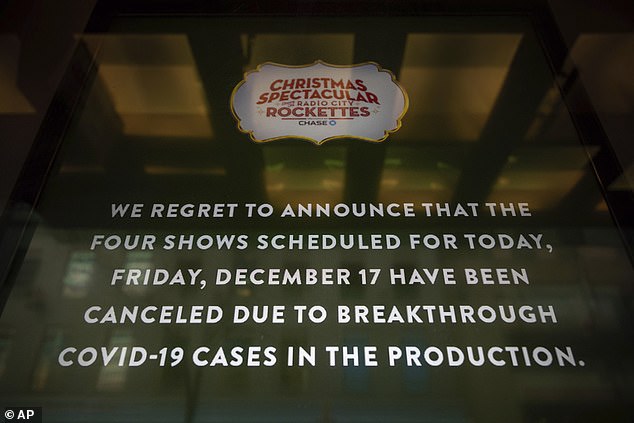 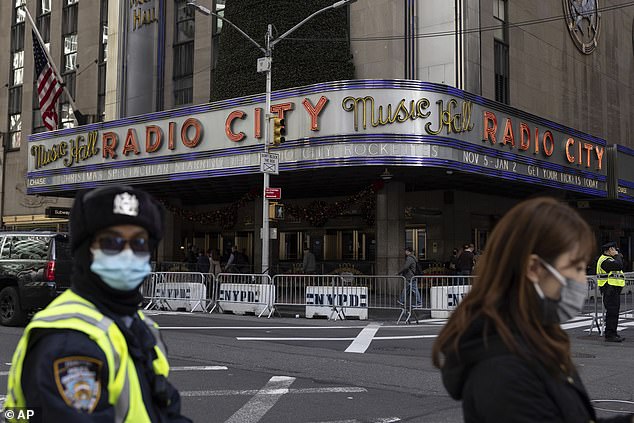 Radio City, where the Rockettes perform, is seen on Friday with barricades up, as the show has closed for the rest of the year

‘We regret that we are unable to continue the Christmas Spectacular this season due to increasing challenges from the pandemic,’ the Rockettes announced in a statement on Twitter Friday evening.

‘We had hoped we could make it through the season and are honored to have hosted hundreds of thousands of fans at more than 100 shows over the last seven weeks.

‘We have loved bringing back this cherished tradition that helps usher in the holiday season in New York City and look forward to welcoming fans back to Radio City Music Hall in 2022.’

The Rockettes said all tickets for impacted shows will be fully refunded at the point of purchase.

The Rockettes announced earlier that they had called off four performances scheduled for Friday because of breakthrough COVID-19 cases in the production.

The popular holiday program generally has four shows per day in December at Radio City Music Hall in Manhattan.

New York City’s Metropolitan Opera has decided that it will now require all employees and audience members to have received booster vaccinations, The New York Times reported.

On Thursday night, the audience of Moulin Rouge! was seated and waiting for the music to start when the show was canceled.

So too was Mrs Doubtfire; MJ, the Michael Jackson musical; and Tina – The Tina Turner Musical.

Among the other productions that canceled performances this week are Harry Potter and the Cursed Child, Ain’t Too Proud and Freestyle Love Supreme. 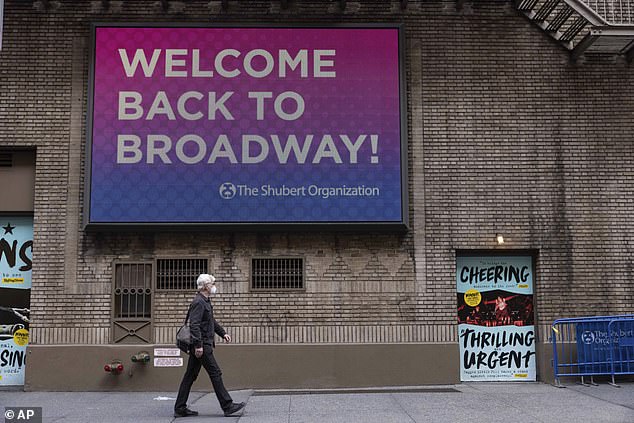 A man walks past an electronic board on Friday reading ‘Welcome Back to Broadway!’ after cancellations of the broadway shows due to COVID-19 cases 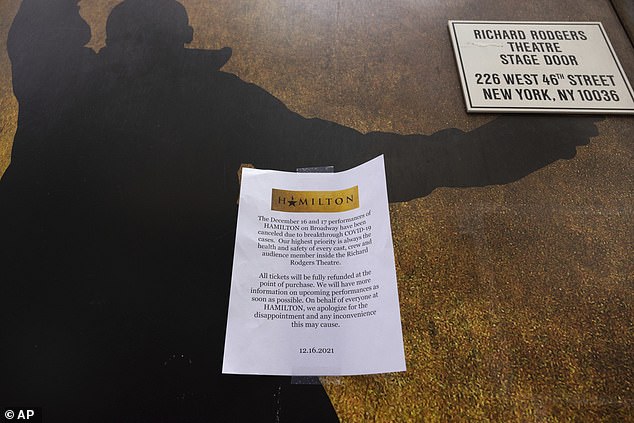 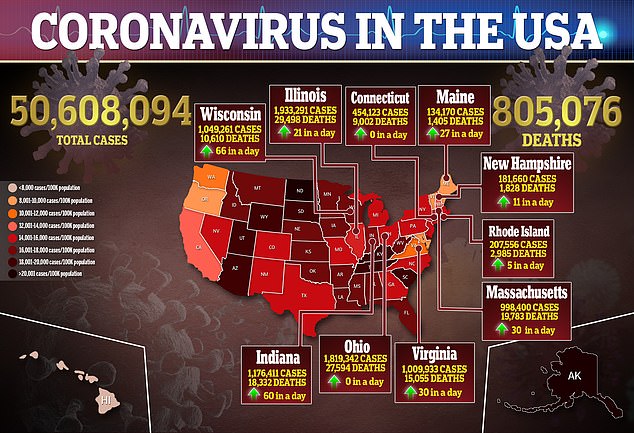 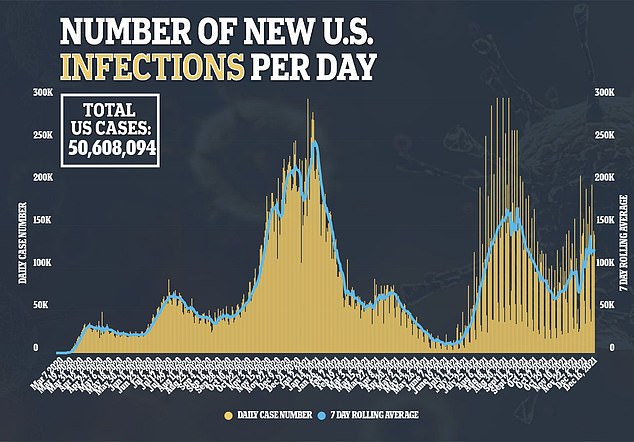 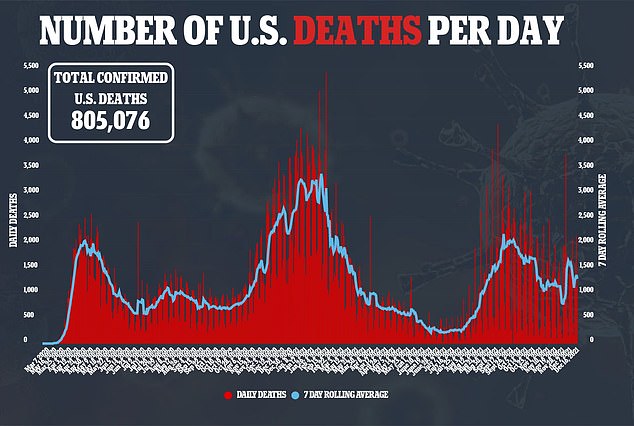 Last weekend, the Off Broadway production of Little Shop of Horrors canceled its Saturday and Sunday performances due to one case of Covid within the company.

The National Football League is also mandating coaches and players be boosted by December 27.

‘Um, we’ve never seen this before in NYC. Test positivity doubling in three days,’ he said.

He noted the city’s positivity rate from December 9 to December 12, pointing out that it had doubled from 3.9 percent to 7.8 percent.

‘Note: Test % is only for PCR & NYC does more per capita daily than most places ~67K PCR/day + 19K [reported] antigen over past few days,’ he added.

Long lines were seen across all five boroughs as people waited to get tested, despite the city being 81.5 per cent fully-vaccinated, with 16.5 per cent of residents also having their booster. 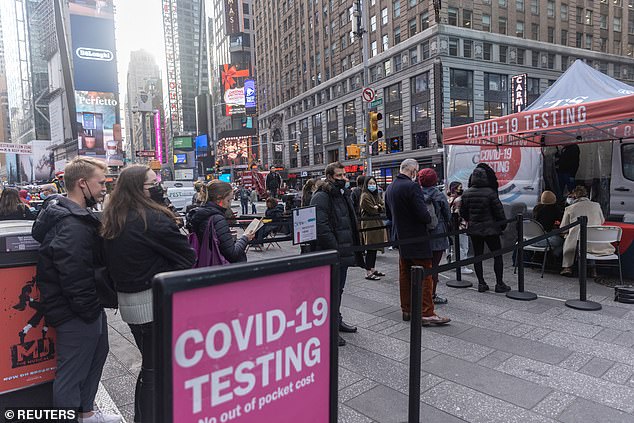 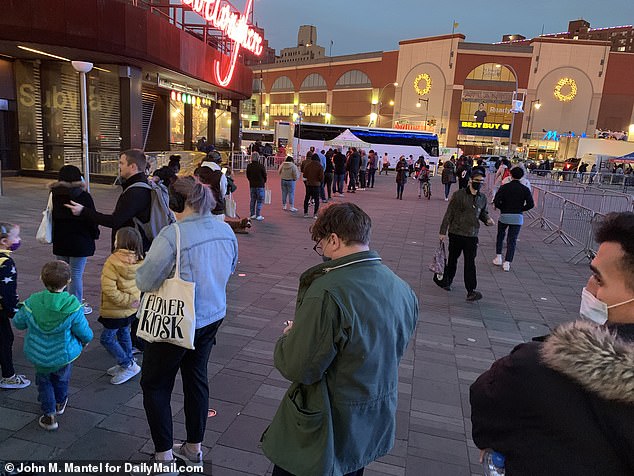 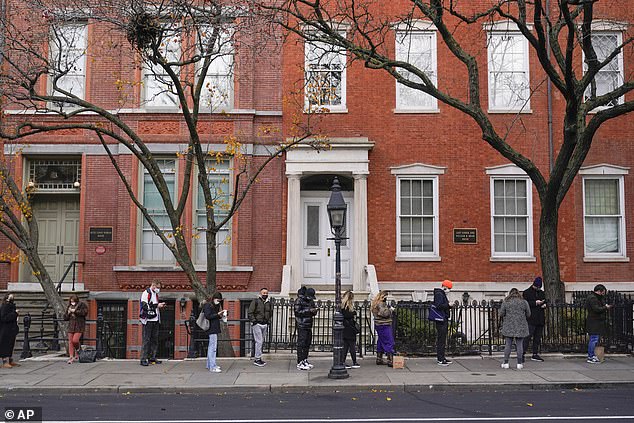 People line up in Greenwich Village, near some of the NYU buildings, on Thursday 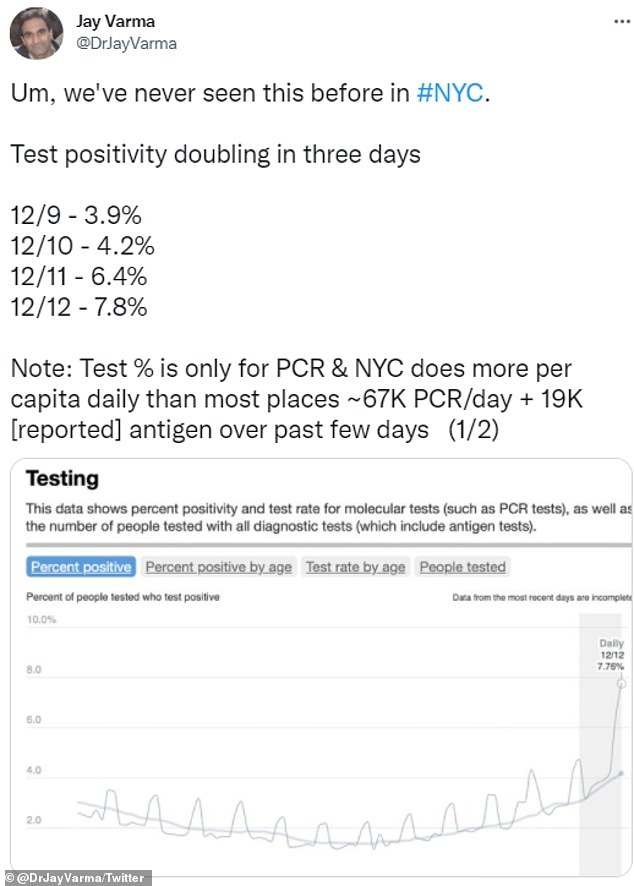 Unvaccinated people are being hit especially hard by this surge, with official city data showing that 804.46 out of every 100,000 testing positive for the virus during the week that ended on December 5 – nearly doubling from 415.99 cases per 100,000 a week earlier.

According to city data, 96.81 our of every 100,000 vaccinated residents tested positive that week.