A powerful storm charged through southern California on Tuesday, drenching the drought-stricken state and triggering mandatory evacuations due to the threat of mudslides in some areas scarred by wildfires.

The National Weather Service reported remarkable rainfall in several parts of the state.

North of the Golden Gate Bridge, Mount Tamalpais accumulated more than 11 inches (28 centimeters) over 72 hours. By early Tuesday, nearly 7 inches (18 centimeters) of rain had fallen in one area of Santa Barbara County, northwest of Los Angeles.

Los Angeles firefighters searched the surging Los Angeles River on Tuesday after discovering two submerged vehicles wedged against a bridge pillar south of downtown and learning that a third vehicle had been swept past the bridge.

No victims, if any, were immediately located and firefighters were waiting for the water level to fall.

‘The circumstances surrounding these three separate vehicles and their journey down the L.A. River remain unclear,’ a Fire Department statement said. 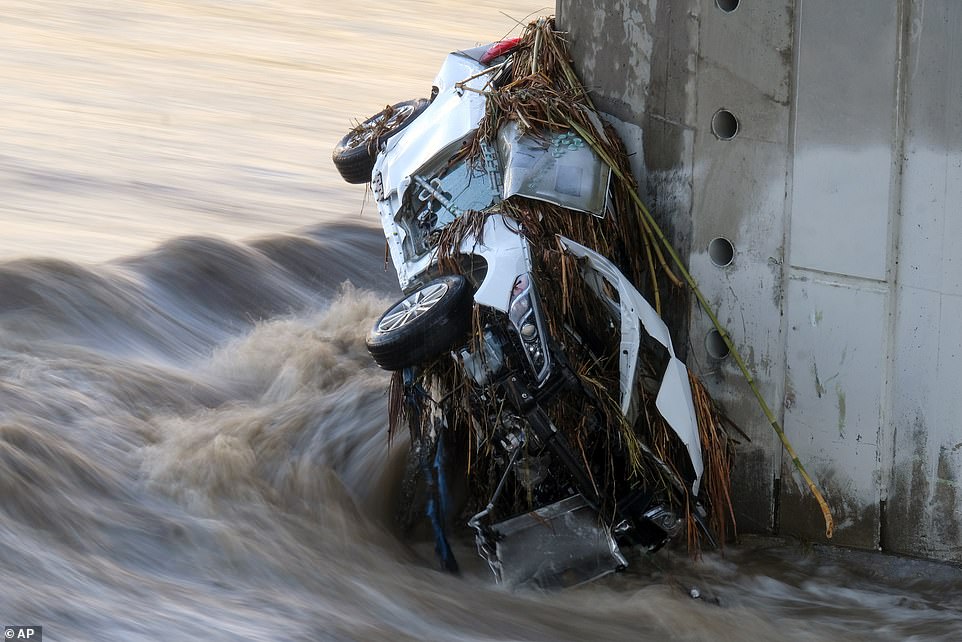 A vehicle is seen in the Los Angeles River at the Washington Bridge near downtown Los Angeles on Tuesday, Dec. 14, 2021. Rain is drenching Southern California as a blustery storm charged down the state, triggering river rescue efforts and raising the threat of mudslides in areas scarred by wildfires 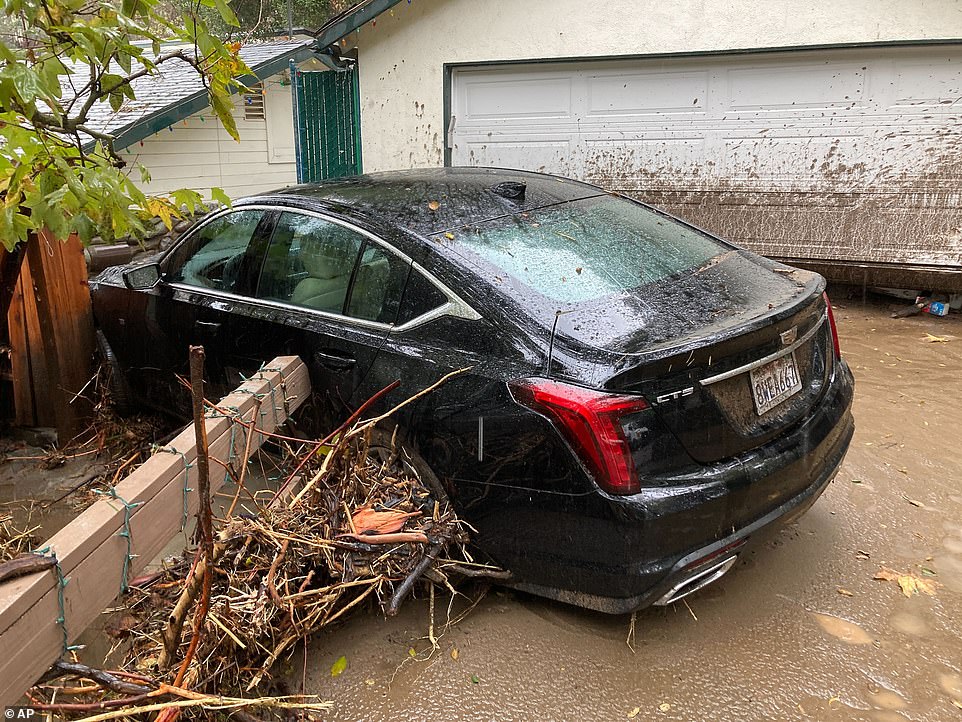 A Cadillac CTS is seen surrounded by floodwaters in Silverado Canyon, Calif., Tuesday, Dec. 14, 2021. In Orange County, south of Los Angeles, about 800 canyon homes were under evacuation orders Tuesday after a flash flood warning was issued and mudslides were reported in the area scorched by the Bond wildfire in 2020 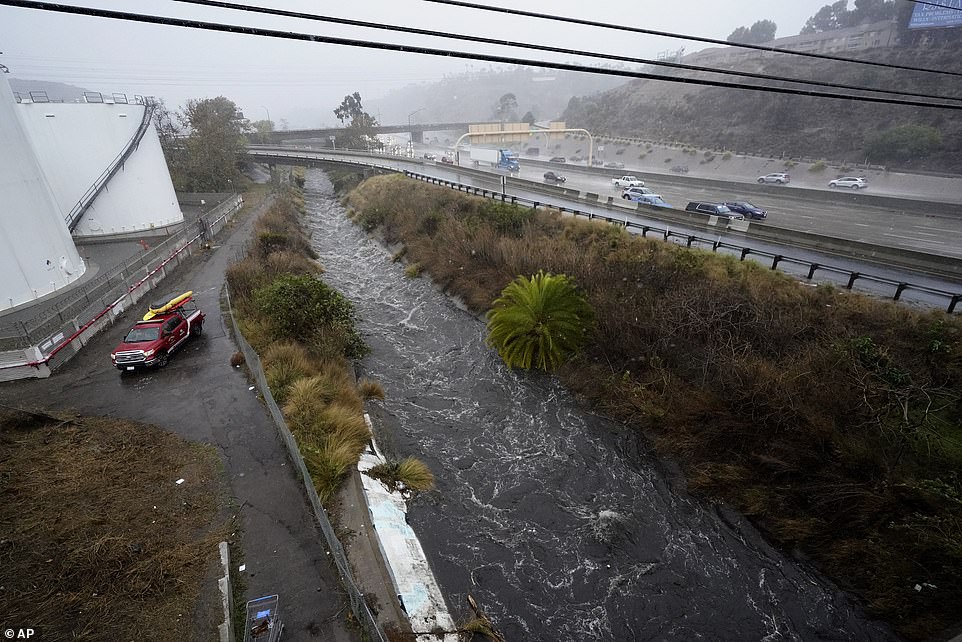 A San Diego Lifeguard River Team unit patrols along a flooded water way as it leads toward the San Diego River, Tuesday, Dec. 14, 2021, in San Diego. Rain is drenching Southern California as a powerful storm slides down the state, snarling traffic and raising the threat of mudslides in areas scarred by wildfires 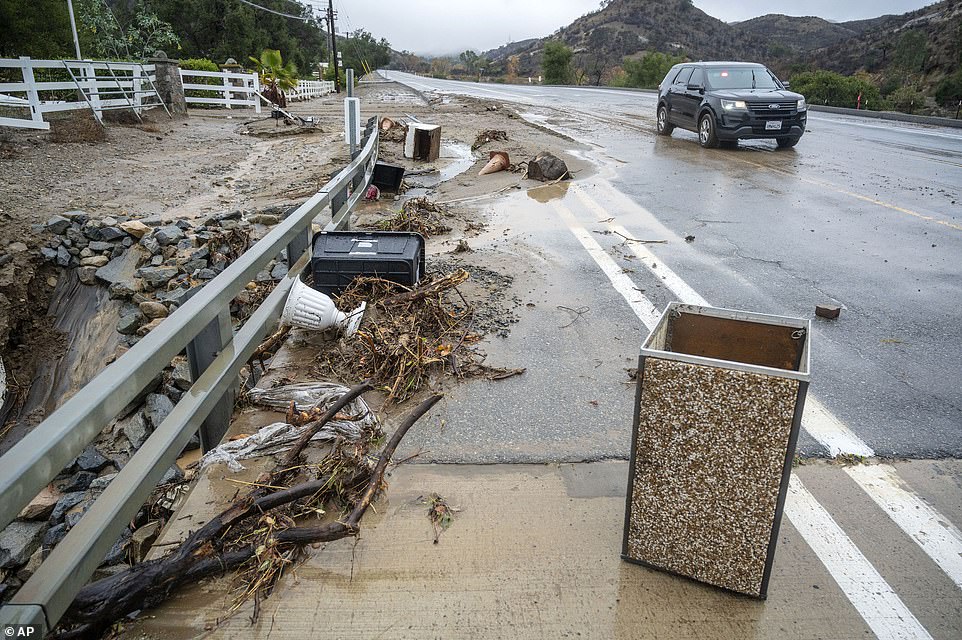 A vehicle passes by mud and debris that were washed on to E. Santiago Canyon Road in eastern Orange County, Calif., by a flash flood during a winter storm that brought heavy rain, high winds and flash flooding to Orange County and Southern California Tuesday, Dec. 14, 2021 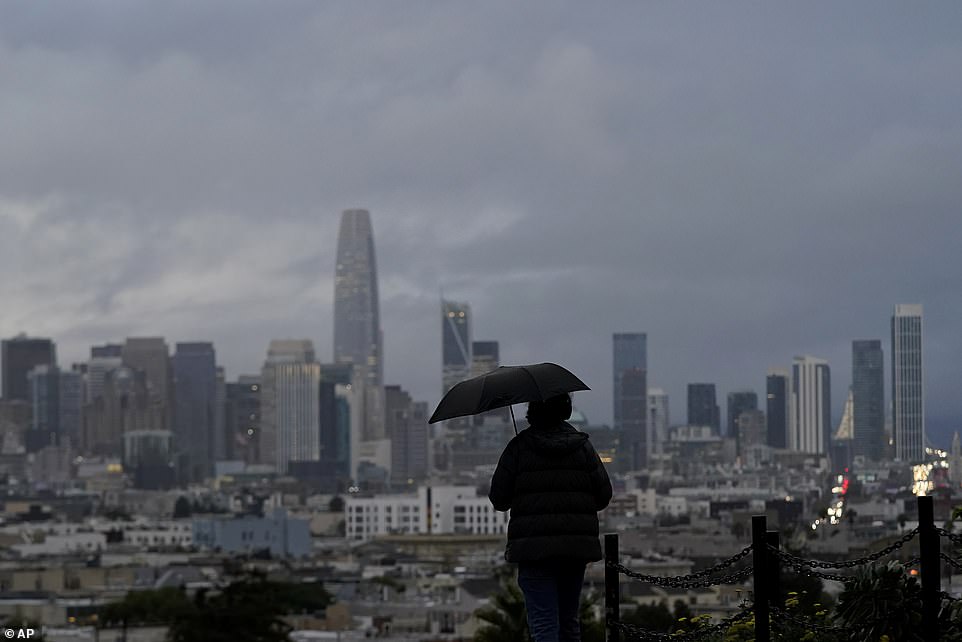 A pedestrian carries an umbrella while looking toward the skyline from Dolores Park in San Francisco, Monday, Dec. 13, 2021. A major winter storm hitting Northern California is expected to intensify and bring travel headaches and a threat of localized flooding after an abnormally warm fall in the U.S. West 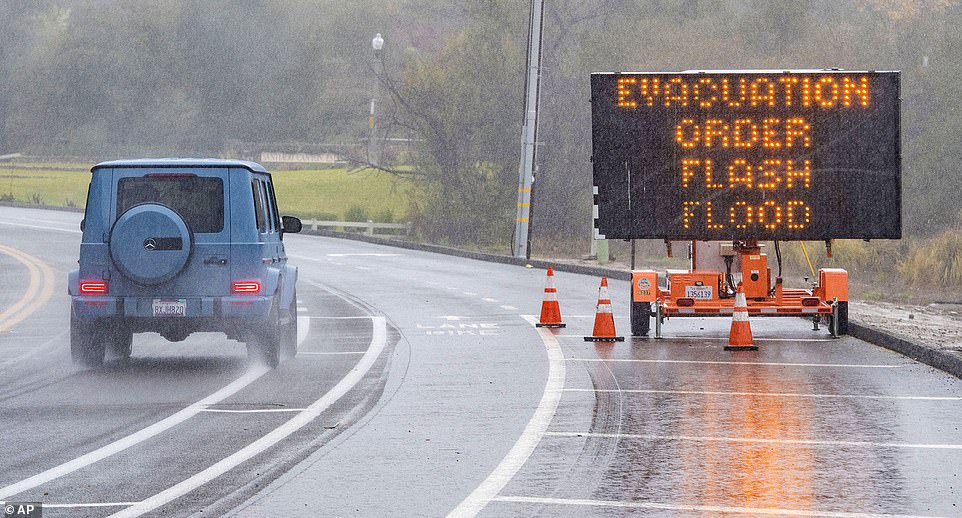 A vehicle passes by a evacuation order sign for the canyons in eastern Orange County, Calif., along E. Santiago Canyon Road in Trabuco Canyon as a winter storm brought heavy rain in the area on Tuesday 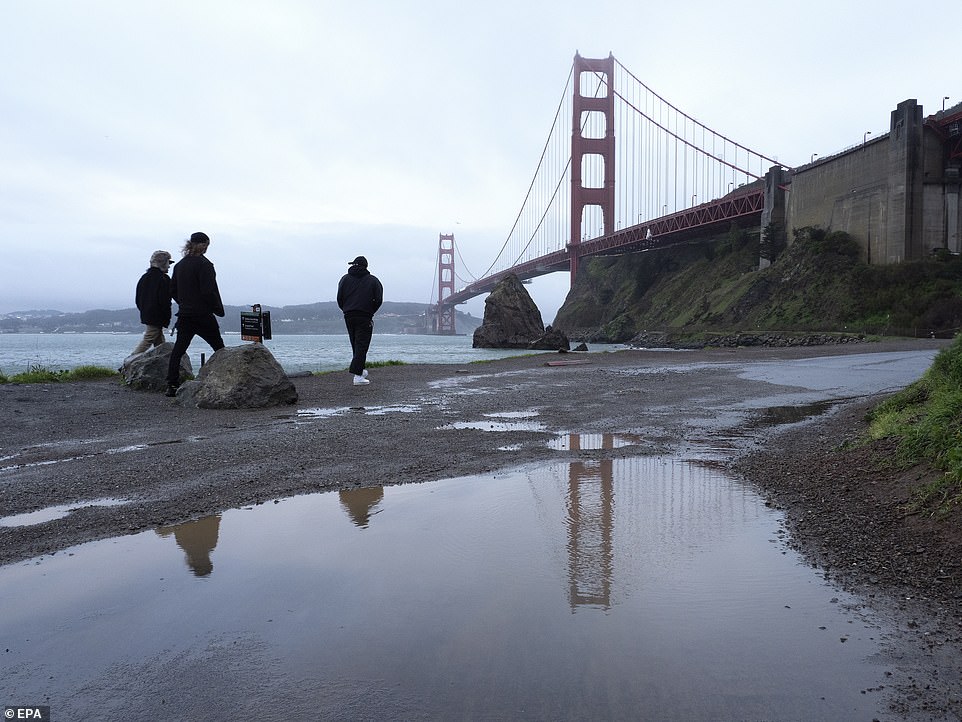 People walk along the the water with the Golden Gate Bridge in the background at Fort Baker, one of the components of the California’s Golden Gate National Recreation Area in Sausalito, California, USA, 13 December 2021, during a break in an atmospheric river storm that soaked the San Francisco Bay Area.

Earlier, a man was rescued after being swept into a covered stream channel in the San Fernando Valley. The man called for help on his cellphone and firefighters reached him through a maintenance hole on the street above.

‘It’s kind of scary out there,’ said Dean Heller, while filling up his car’s gas tank in northeast Los Angeles. Heller said he’d seen a few minor auto accidents and traffic on the Arroyo Seco Parkway had slowed to a crawl because of flooding in lanes.

‘I’m just trying to get stuff done so I don’t have to be on the roads any more,’ he said.

The powerful system is a so-called atmospheric river that sucks up moisture from Pacific Ocean and dumps it at lower elevations as rain and in the mountains as snow.

The storm began over the weekend in Northern California and has brought heavy precipitation as far inland as Nevada, where more than 6 feet (1.8 meters) of snow fell since Sunday night at the Mt. Rose ski resort just southwest of Reno and more than 4 feet (1.2 meters) fell at Heavenly on Lake Tahoe’s south shore. Mammoth Mountain in the eastern Sierra also got about 4 feet (1.2 meters).

Residents near the Alisal Fire burn scar in California’s Santa Barbara County were ordered Monday to evacuate over concerns that heavy rains might cause flooding and debris flows. The order was lifted Tuesday afternoon.

Similar orders were issued for people living near burn scars in the San Bernardino Mountains east of Los Angeles, where rockslides were reported. A mountain route into the resort town of Big Bear was expected to be closed until Wednesday while crews cleared several feet of mud and debris. 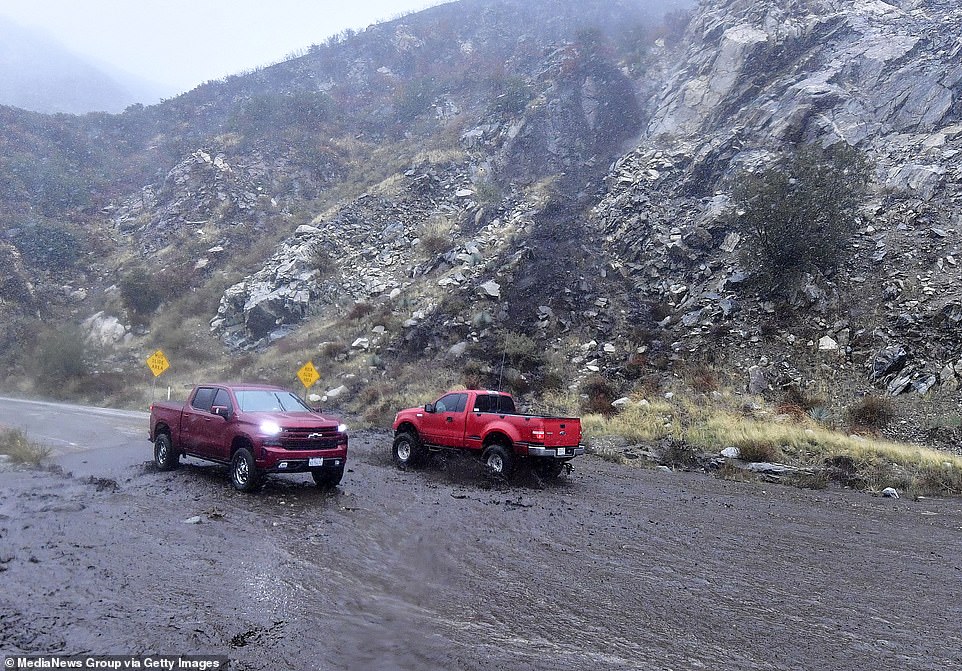 Vehicles drive through mud on Lytle Creek Road as debris from the South fire flows down the hillside covering the road Tuesday morning Dec. 14, 2021 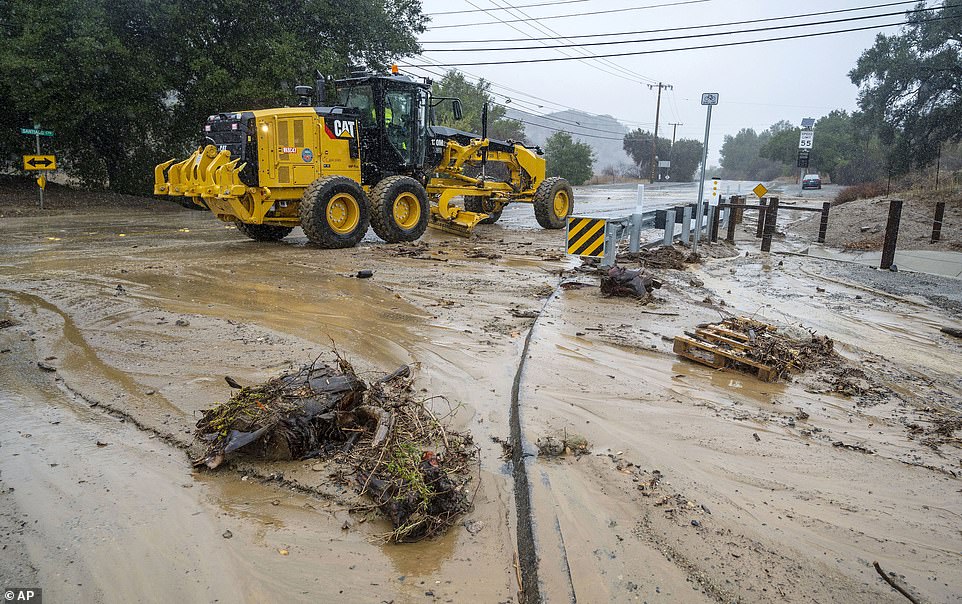 A road grader clears mud and debris along a closed E. Santiago Canyon Road at the intersection of Modjeska Canyon Road in eastern Orange County, California 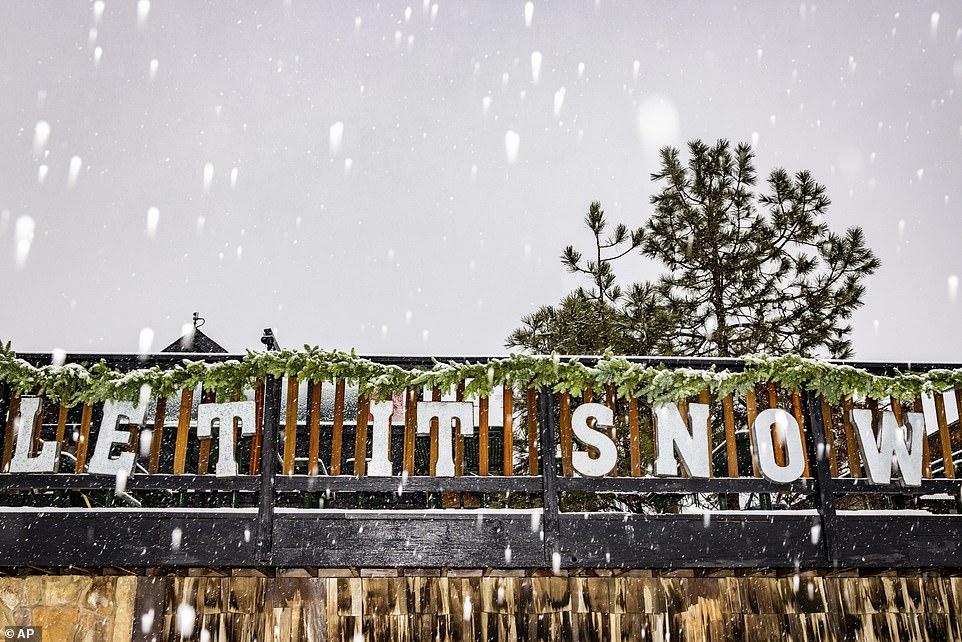 In this photo provided by Big Bear Mountain Resort, snow falls Tuesday, Dec. 14, 2021, in view of a sign encouraging more where the snow is expected to continue falling until early Wednesday morning, with storm totals over a foot likely, in Big Bear Lake, California 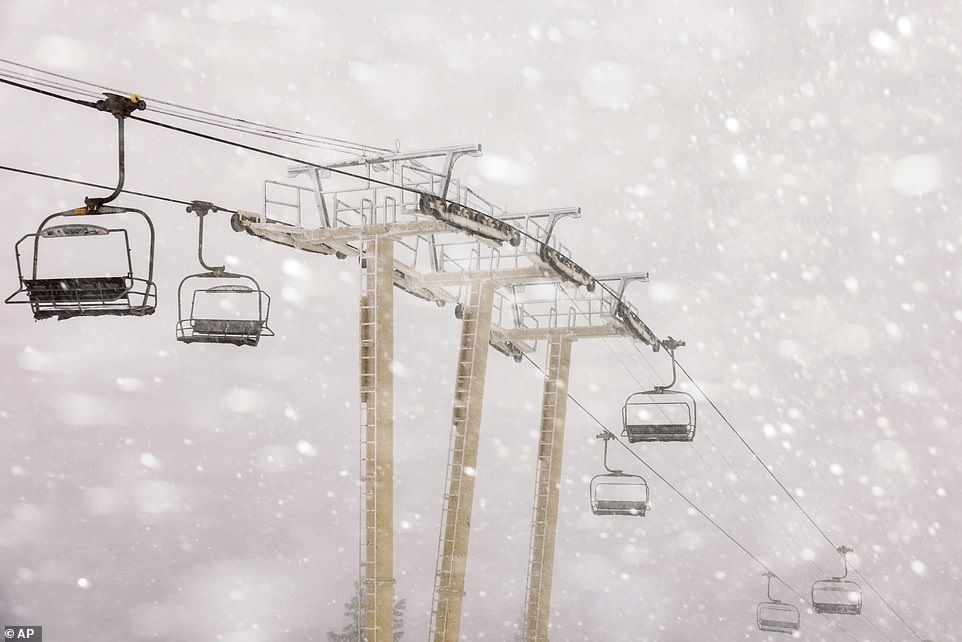 In this photo provided by Big Bear Mountain Resort, snow falls Tuesday, December 14, 202, in view of ski lifts where the snow is expected to continue falling until early Wednesday morning, with storm totals over a foot likely, in Big Bear Lake, Calif. The multiday storm hitting California raised the threat of flooding and was expected to dump more than 8 feet of snow on the highest peaks in California and Nevada and drench other parts of the two states before it moves on midweek, forecasters said 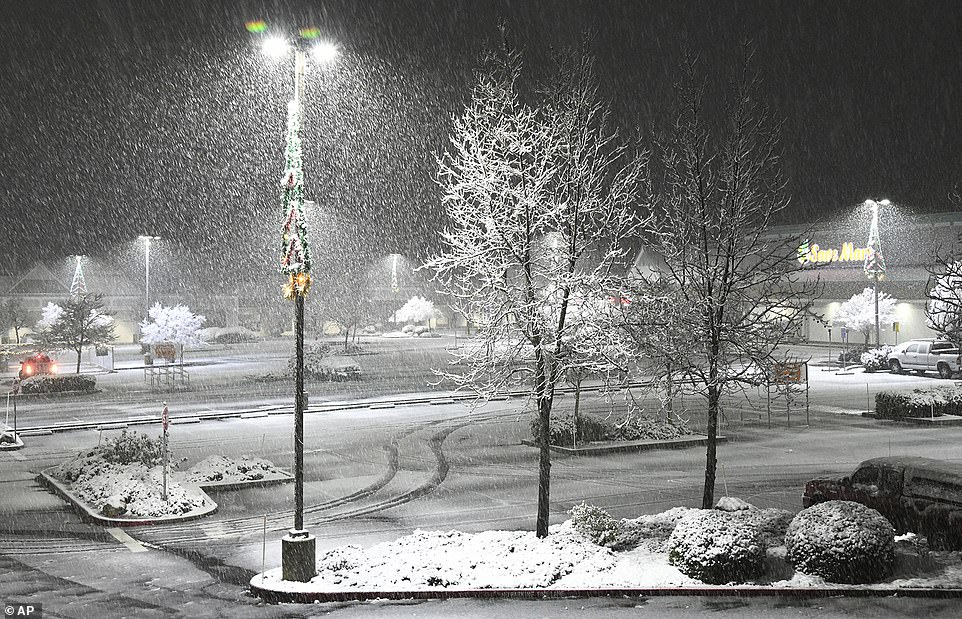 In Orange County, south of Los Angeles, about 800 canyon homes were under evacuation orders Tuesday after a flash flood warning was issued in the area scorched by a 2020 wildfire.

After a cloudburst calmed to a drizzle, Lori Bright leaped a puddle in LA’s Highland Park neighborhood, determined to get her daily steps in despite the soggy weather.

‘There’s a lull, so I decided to go for it,’ Bright said. ‘I don’t really mind getting wet. Just happy to have any rain.’

She crossed her fingers in hopes that the deluge might make a dent in the state’s drought. 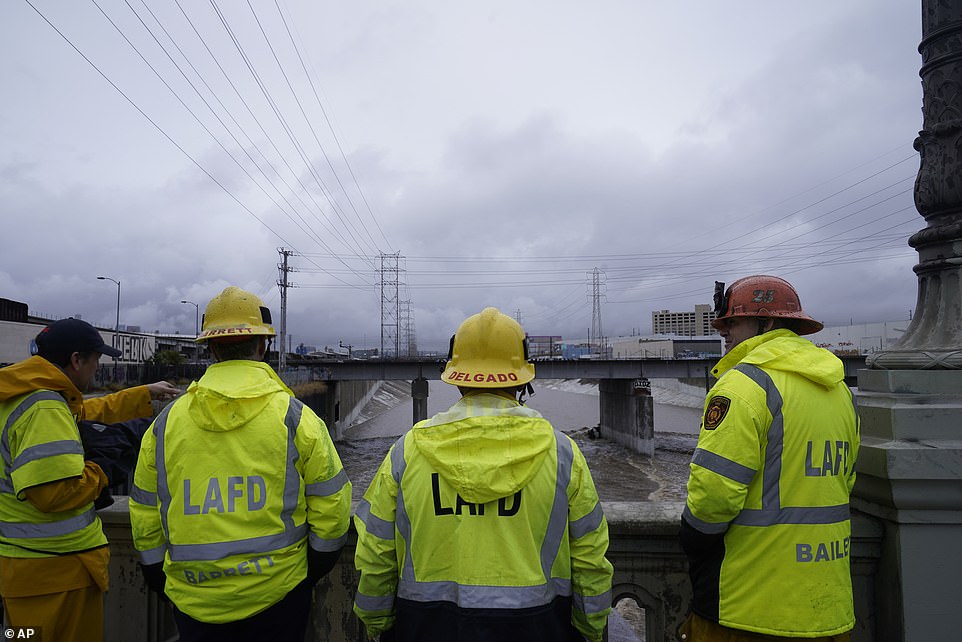 Los Angeles firefighters wait for the water level to fall while looking down at a submerged vehicle wedged against a bridge pillar in the surging Los Angeles River Tuesday, Dec. 14, 2021 in Los Angeles. No victims, if any, were immediately located. 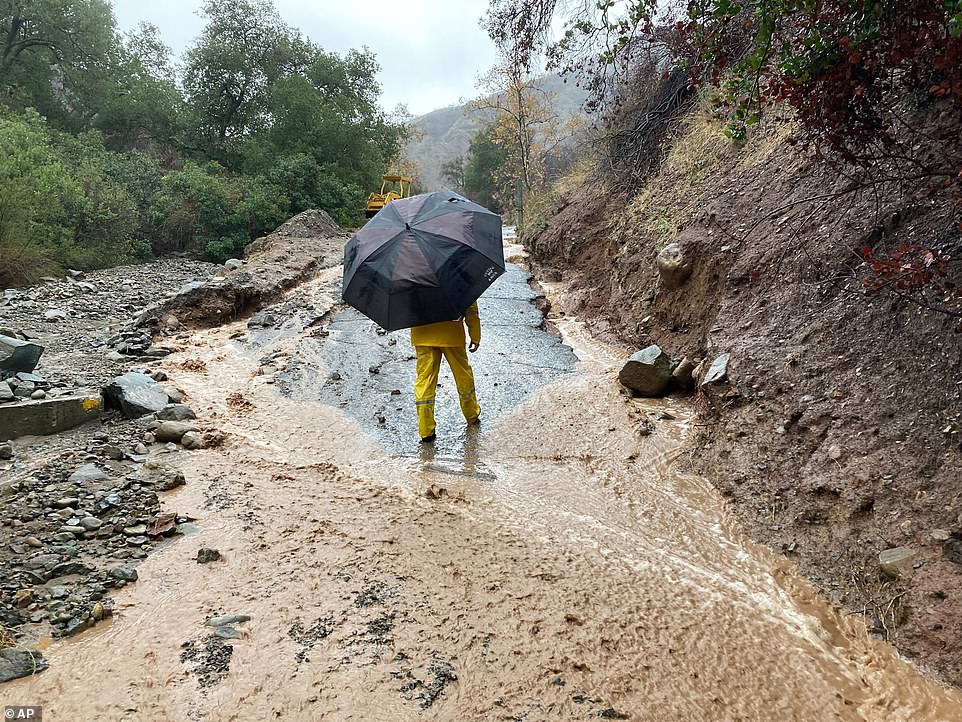 A local resident surveys the damage to a washed-out road in Silverado Canyon, Calif., Tuesday, Dec. 14, 2021 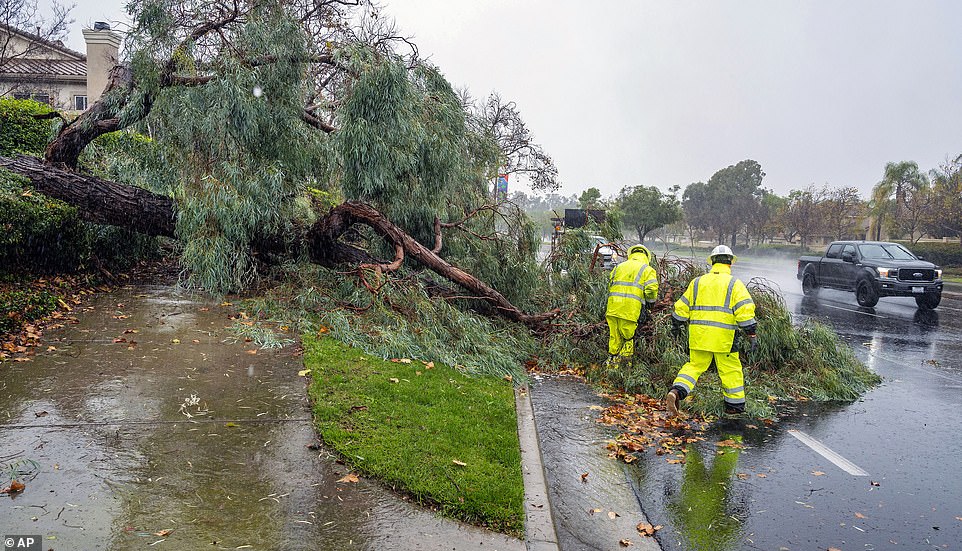 Crews clear a tree that fell on to Antonio Parkway at La Ventana in Rancho Santa Margarita, Calif. 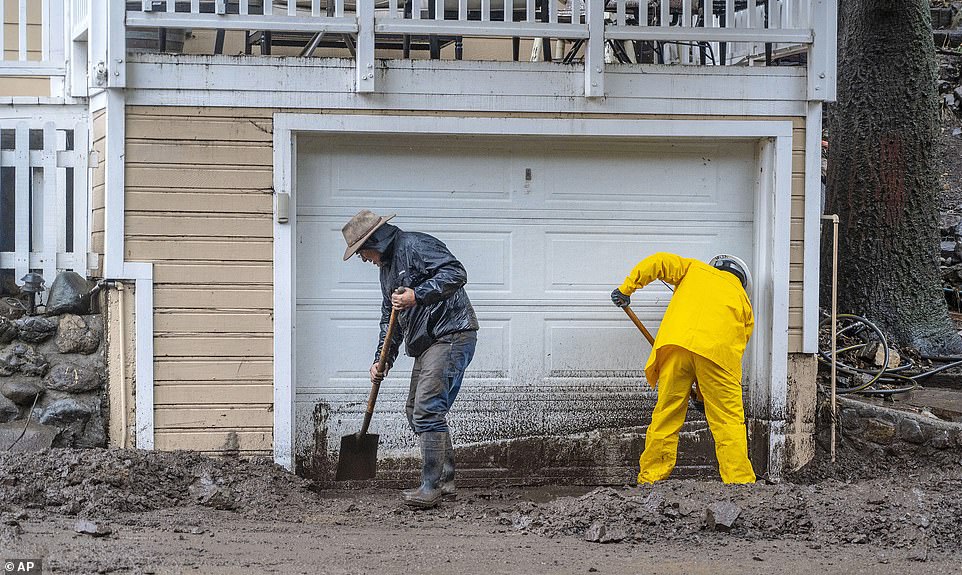 Residents dig out from a mudslide covering part of Silverado Canyon Road in Silverado, located in eastern Orange County, Calif 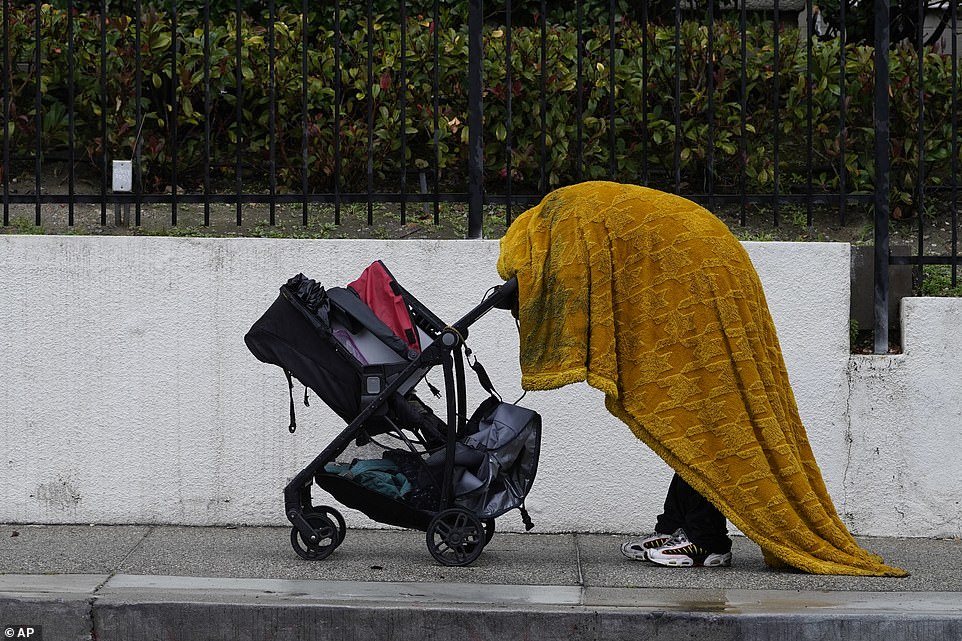 A homeless person shields themselves from the rain under a wet cover in downtown Los Angeles Tuesday, Dec. 14, 2021, in Los Angeles. A powerful storm slid south through California on Tuesday, drenching the drought-stricken state with desperately needed rain 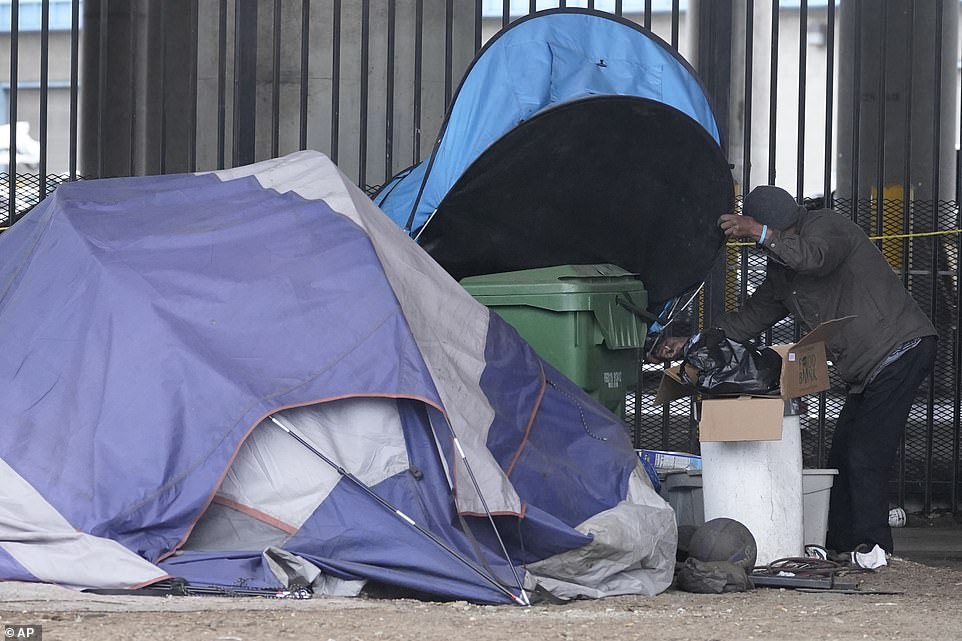 A homeless person moves his tent under a freeway in downtown Los Angeles on Tuesday, Dec. 14, 2021, while torrential rain pours down in the surrounding metropolitan area

Jeffrey Mount, a senior fellow at the Public Policy Institute of California’s Water Policy Center, said the storm won’t be a drought-buster, but water watchers are excited about all of the snow it’s dumping in the Sierra Nevada.

Melted snow that runs into California’s watershed when the weather warms makes up about a third of the state’s water supply. It’s important for a strong base of snow to develop in December so that storms later in the winter have something to build on, he said. Most western U.S. reservoirs that deliver water to states, cities, tribes, farmers and utilities rely on melted snow in the springtime.

‘You’re literally putting water in the bank up there,’ he said.

Any moisture is much-needed in the broader region that’s been gripped by drought that scientists have said is caused by climate change. The latest U.S. drought monitor shows parts of Montana, Oregon, California, Nevada and Utah are classified as being in exceptional drought, which is the worst category.

A second storm predicted to hit California midweek shortly after the current system moves on could deliver almost continuous snow in mountainous areas, said Edan Weishahn of the weather service in Reno, which monitors an area straddling the Nevada state line.