A subtropical blast is set to make southern England as mild as the south of France this weekend – with temperatures double the seasonal average.

A plume of warm air from the Azores is likely to result in maximum temperatures of 14C (57F) tomorrow, similar to those expected in Nice.

Even in northern England and Wales, highs of 13C (55F) are possible. The normal UK average temperature for early to mid-December is 7C (45F).

But Met Office forecasters say temperatures are likely to plummet again over the festive period, with fog and frost expected to grip the country over Christmas.

Christmas shoppers made the most of the unseasonable weather today as they hit high streets across Bristol, Newcastle and London. 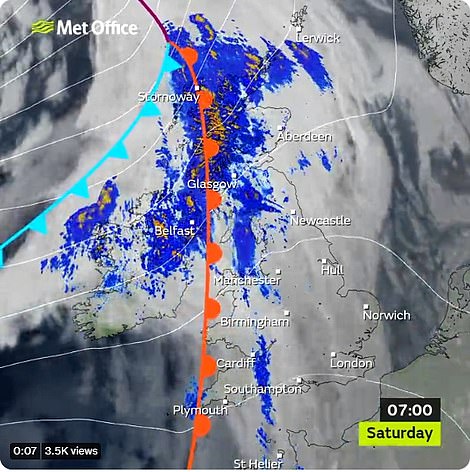 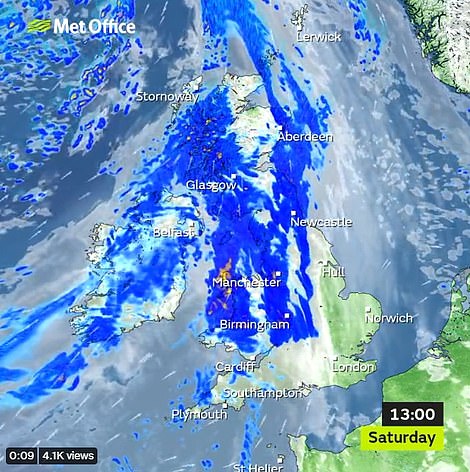 A plume of warm air from the Azores is likely to result in maximum temperatures of 14C (57F) tomorrow, similar to those expected in Nice 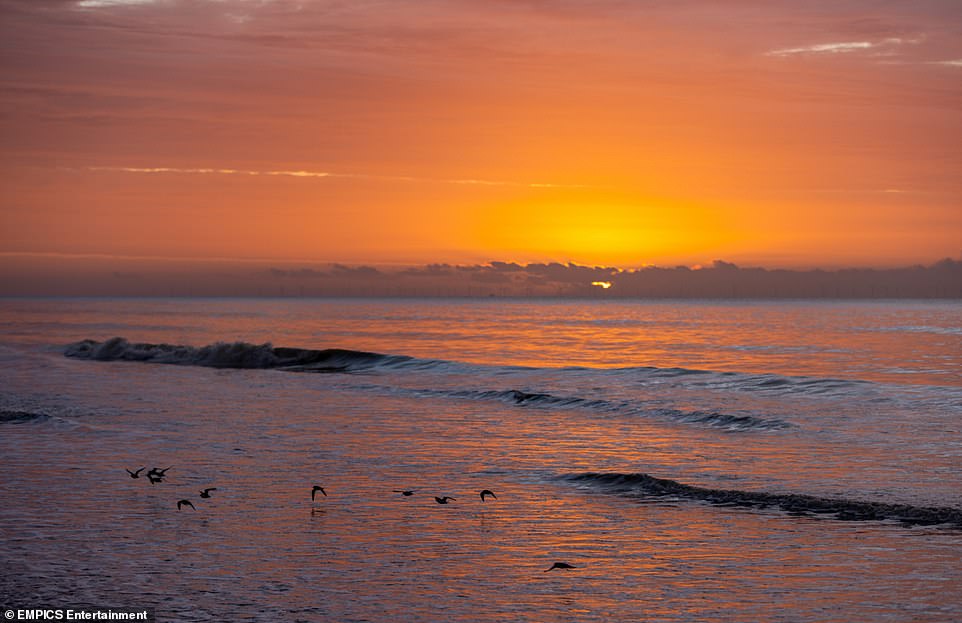 Birds flying across the water during sunrise in Rustington, West Sussex this morning as the southeast wakes up to bright skies 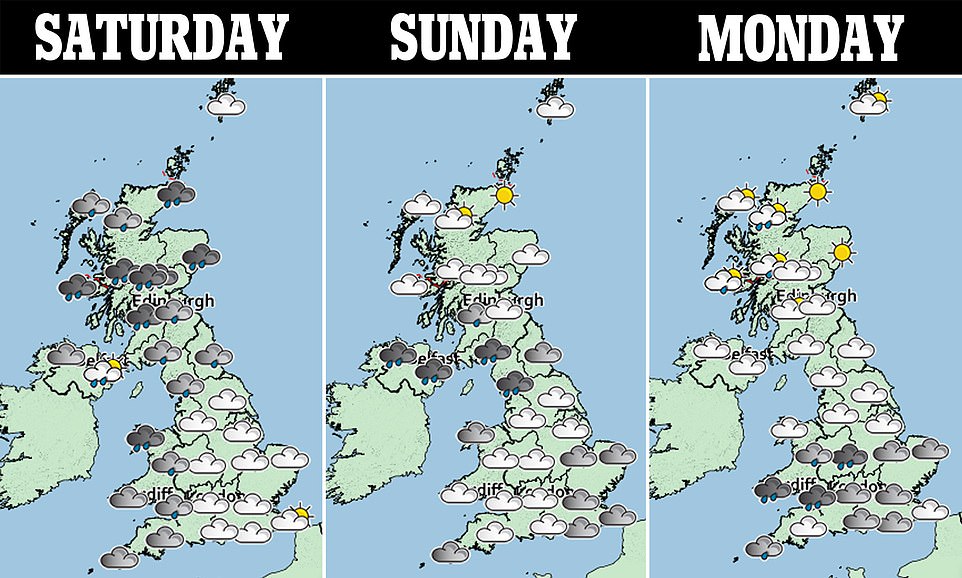 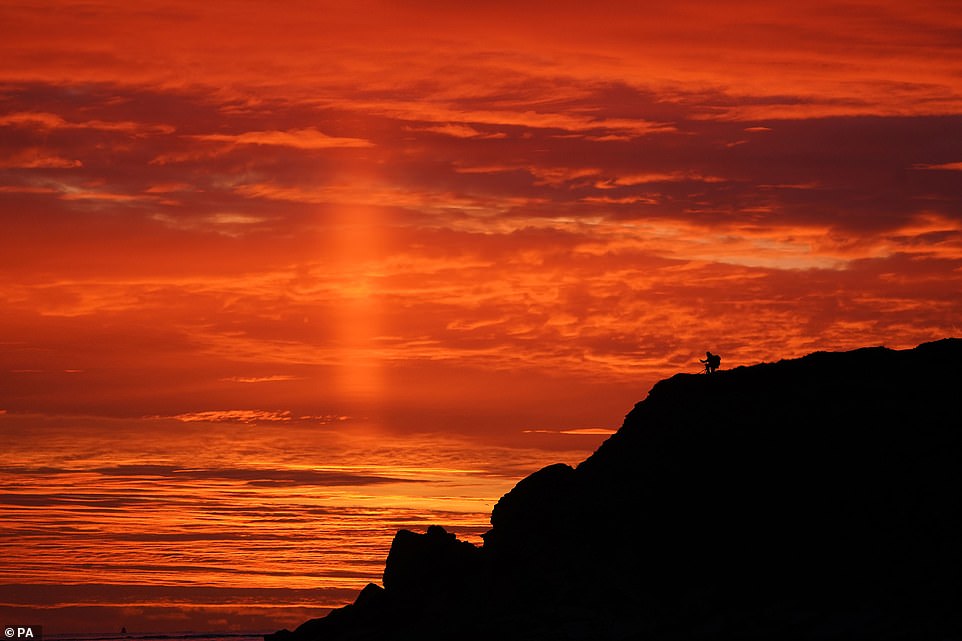 After a chilly start to the week with heavy winds battering the country, the weather across the UK is set to get milder and reach highs of 55F (13C) this weekend and into next week as we enter the middle of December.

Many in the southeast will have woken up to bright skies and a chill, as the north experienced slightly higher temperatures but wetter weather with bouts of showers this morning.

England and Wales will remain mild and cloudy tonight, with some rain and drizzle expected in the west. It will be clearer further north, with showers affecting the far northwest. 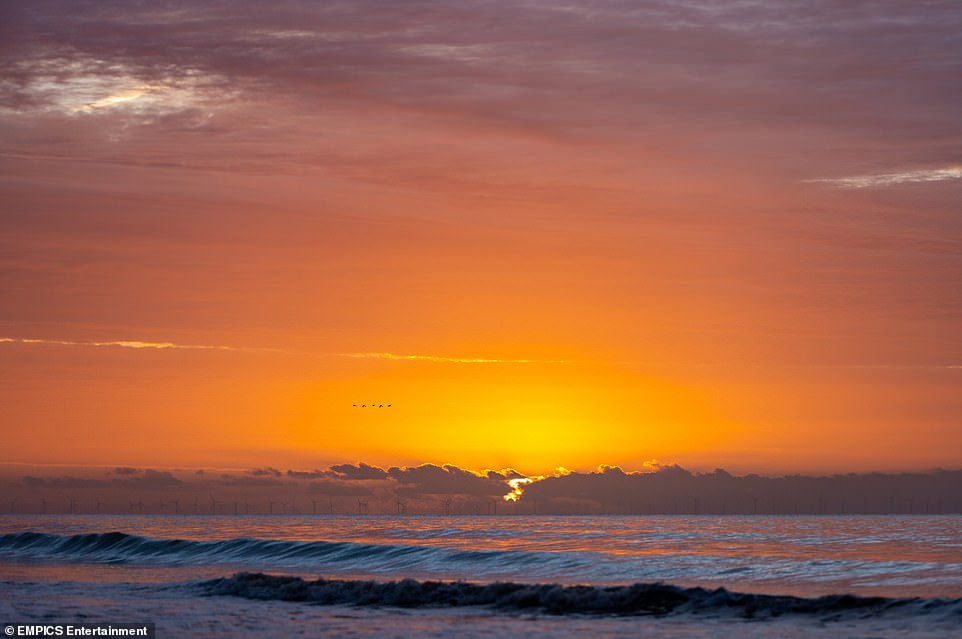 A wind-farm seen on the horizon during as the sun rises in an orange sky in Rustington, West Sussex on Saturday

The coldest it’s likely to get in the next few days is tonight, where parts of Scotland may face a local frost as temperatures will drop to just 32F (0C), a Met Office spokesman said.

On Sunday rain and drizzle is expected to sweep through England and Wales and move northwards into Northern Ireland and Scotland.

Tomorrow many in the southeast can expect to wake up to temperatures in the double digits and areas near London and Bristol can expect highs of 55F (13C); above average for this time of year.

In contrast those in Scotland will greet Sunday morning with grey skies as yellow weather warnings have been issued across parts of the northwest where winds and severe gales are expected. 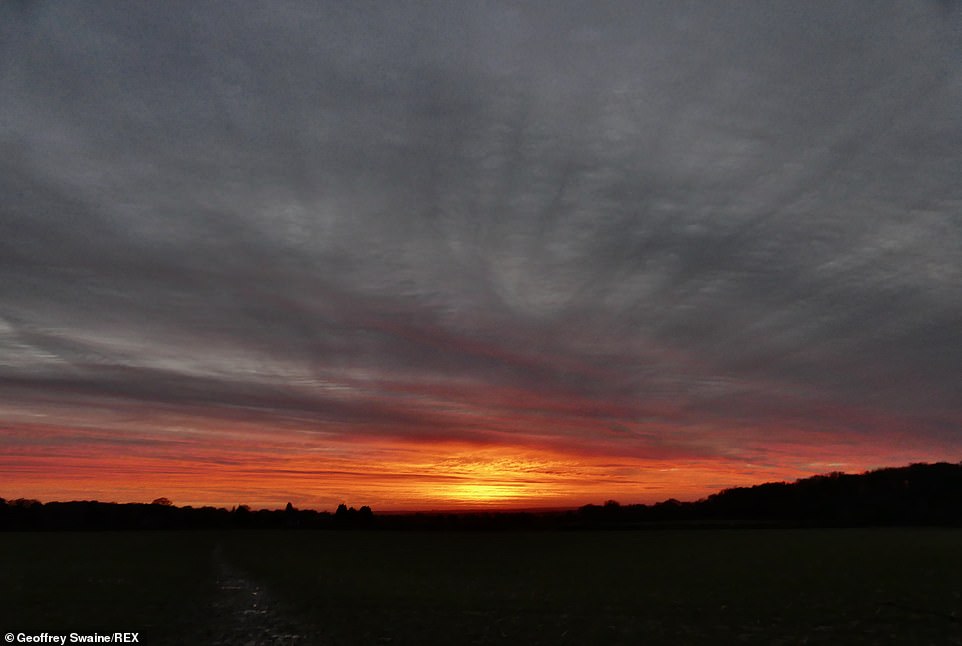 Fiery skies over the farmers’ fields at sunrise on Saturday morning in Dunsden, Oxfordshire 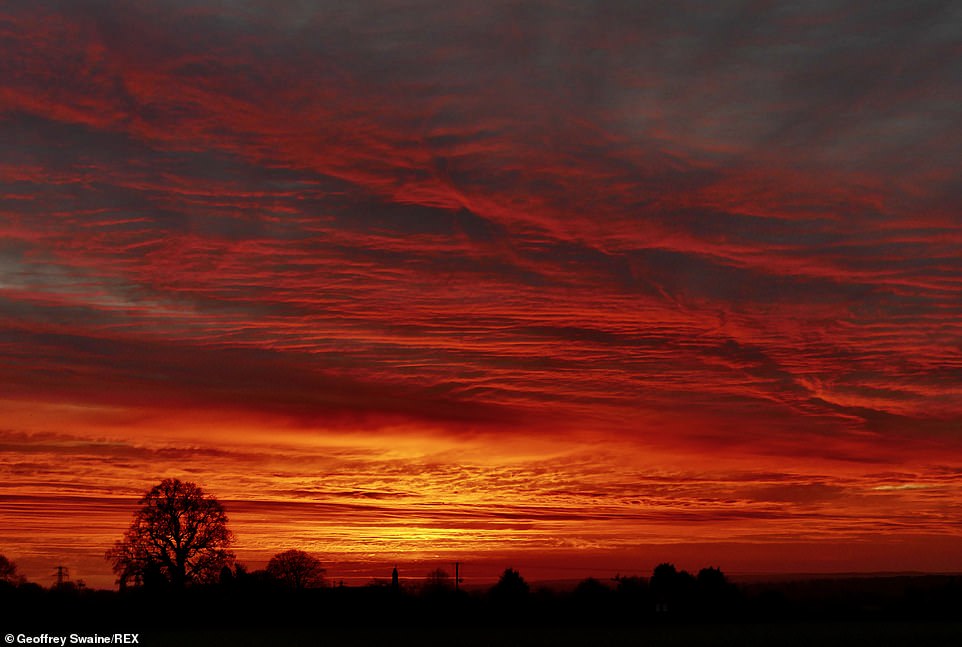 The skies were red as the sun rose over Dunsden in Oxfordshire this morning, with the weather turning grey

The winds could reach more than 90mph in the most exposed coastal areas.

‘There will also be some associated rain brought in with the low pressure system, with some heavy downpours overnight on Sunday in the northwest, but these will also be short lived.’

From Monday onwards the weather is expected to be milder, with temperatures likely reaching double digits during the day but largely unsettled. 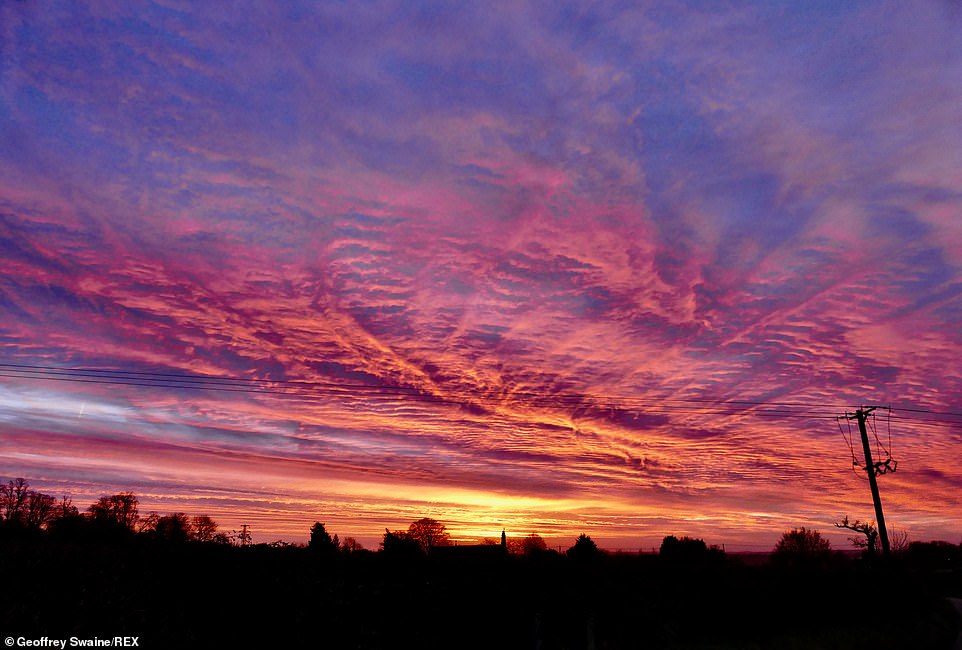 Rain will affect mainly western parts of the UK as winds throughout the four nations tackle their way across the far north first.

According to the Environmental Agency local flooding is also possible today, tomorrow and on Monday across parts of Wales due to the rainfall.

There is a flood risk for rivers and surface water in parts of central and northern England on Tuesday but this is not expected.

A Met Office spokesman today said: ‘It’s typical December weather: some rain, some wind and moments of dry weather in between. 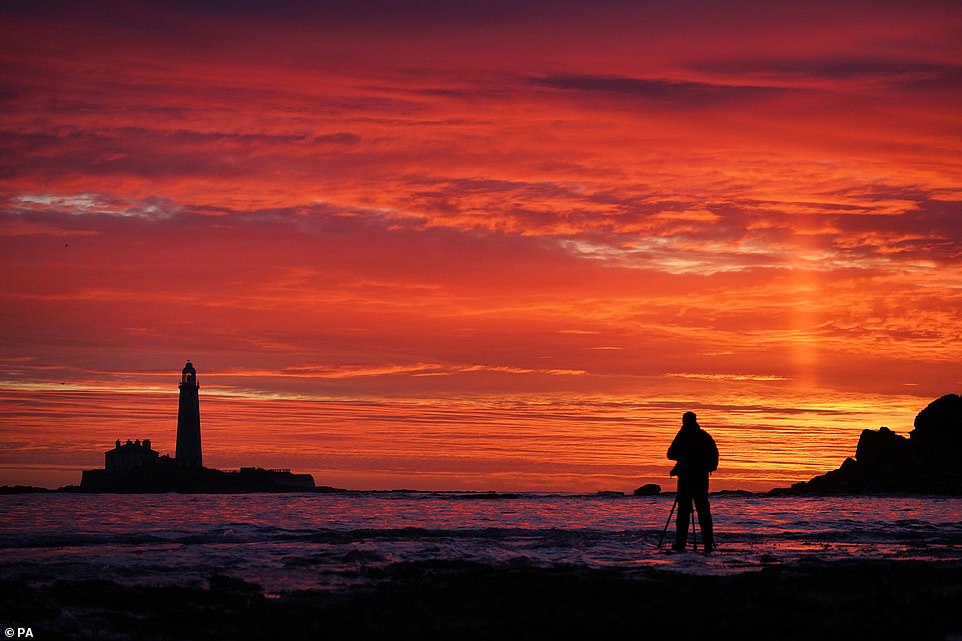 Whitley Bay. While much of the north experienced rain this morning the drizzle is set to spread across the country today 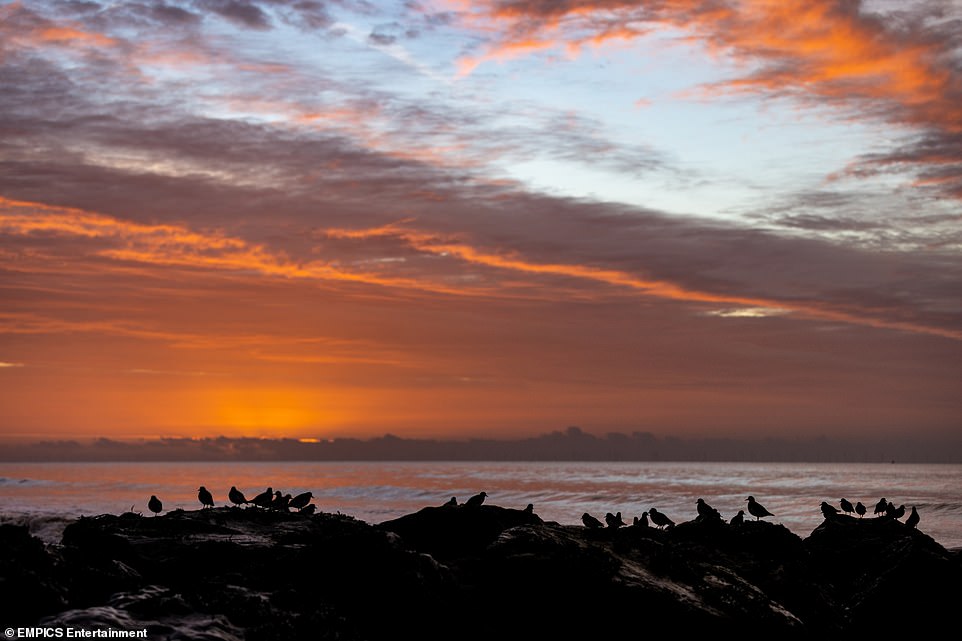 Birds sitting the rocks during sunrise in Rustington, West Sussex earlier this morning

‘We’ve got very strong winds tomorrow night we’ll be keeping a close eye on that.

‘At the moment the way the weather pattern is that we’re getting weather systems coming in from the west.

‘At this time of year the Atlantic is pretty unsettled.’

But from Wednesday onwards as the milder temperature in the south will remain with clouds and some rain, the northwest will bask in a crisp winter with sunshine and some showers.

As the week continues, fog, which is slow to clear in the mornings and could last all day in some places, will be much more likely across all areas.

As Christmas eve arrives temperatures in the south could drop, turning milder in the northwest, as the likelihood of fog and frost increases across the country.

The Met Office said: ‘Temperatures are expected to be near normal for most, but milder in the northwest and perhaps turning rather cold in the south in time for Christmas.’

‘It’s a fair bit warmer than the seasonal average.’

The unsettled start to December has also meant some areas have already been deluged with more than half the month’s rain.

From December 1-9, Cheshire has had an average of 2.07 inches of rain so far – 64% of the long-term average for the whole of the month, while Derbyshire has averaged 2.39 inches, which is 60% of its usual December rain.

The Met Office said most places would usually receive about 29 per cent of the monthly total in the first nine days.

The rainy weather this weekend could bring another two inches of rain to high ground in North Wales, while 0.4 – 0.8 inches could fall in northwest England.

More unsettled weather is set to continue for the rest of advent but during the Christmas and New Year, forecasters say ‘settled conditions are likely with an increasing chance of frost and fog during clearer spells’.