Fire-alarm sparks chaos at Gatwick quarantine hotel: Travellers from red-list countries including babies and young children are herded together in car park ‘with zero social distancing’ after being evacuated from rooms

By John Sturgis and Jacob Thorburn For Mailonline

Travellers who were staying at a quarantine hotel awoke to scenes of chaos this morning after they were initially told not to leave their rooms during a fire alarm.

The guests, some still wearing their pyjamas, were pictured huddled together in large groups, despite being told they must isolate from others, at the four-star Hotel Sofitel at London Gatwick on Thursday morning.

Eyewitnesses told MailOnline they were initially told to stay in their rooms, despite the fire alarm’s siren blaring around them, before eventually being allowed to leave 15 minutes later by security.

Panicked patrons, both young and old, clutched towels as they were squeezed together in the car park as hotel staff desperately tried to grapple with the situation. Those mixing outside included guests who had arrived from red-list destinations.

Furious travellers, many of whom have paid upwards of £3,700 to quarantine at Sofitel, slammed the lack of social distancing and said they believed Thursday morning’s chaos was a ‘superspreader event’.

MailOnline understands he emergency services were eventually called and restored control of the situation after around an hour. 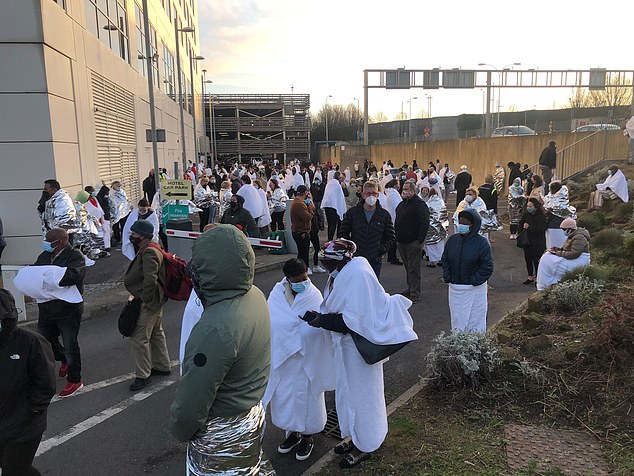 Guests, some still wearing their pyjamas, were pictured huddled together in large groups, despite being told they must isolate from others, at the four-star Hotel Sofitel at London Gatwick 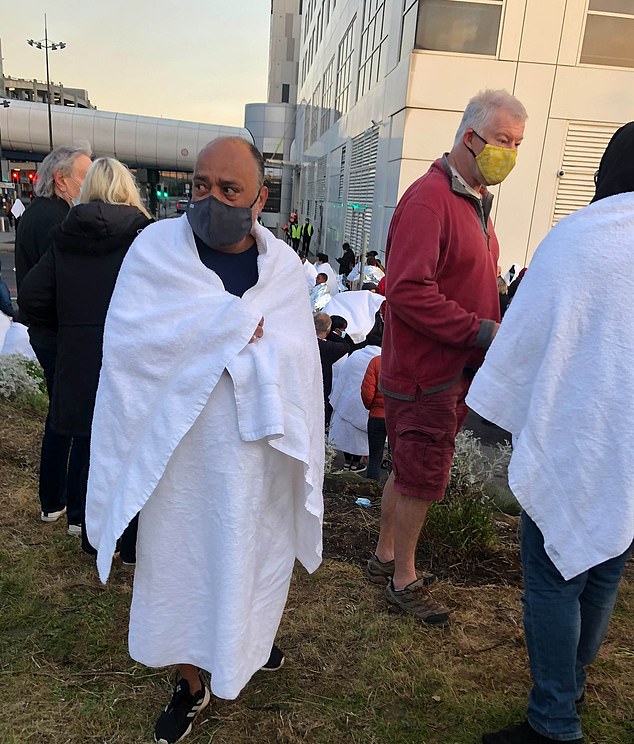 Travellers, some from red-list countries, were allowed to freely mix with other guests in the car park a the Sofitel Hotel in Gatwick on Thursday

Video shot at the scene by exasperated travellers showed dozens of people standing outside as two young members of Sofitel staff tried to conduct a roll call using a loudspeaker.

MailOnline understands that the guests, who spent about an hour outside in chilly 35.6F (2C) temperatures, are now back inside.

Pierre de Villiers, 50, a travel journalist who had arrived from Cape Town told Mail Online that the alarms began to go off shortly before 8am.

‘Everyone was in panic coming out of their rooms and wanting to get out of their rooms in case there really was a fire. There was no one from the hotel around at first. It was very chaotic. Eventually a guard came up and told us not to leave the hotel but he didn’t seem to know if there was a fire or not so no one was doing that.

‘We found our way out of the fire escapes and out into the airport. There were dozens of people who had all been cooped up along all spilling out together.

‘There were women with babies, young children, an old person in a wheelchair, people still in their pyjamas, all in a panic.

‘Airport security then showed up and started trying to get everyone together in a group – and people were saying “What are you talking about – we are meant to be isolating… we have to remain distanced”.

‘So we were spilling out onto the road as no one wanted to stand close to anyone else – and that meant the crowd was blocking the cars coming in trying to drop people off for flights.

‘Finally the police got involved and started calming things down.

‘Blankets were brought out to keep people warm who had fled half-dressed. And the Fire Brigade showed up so finally it was declared safe to return.

‘But the whole episode was a shambles – as if they hadn’t adapted their normal fire drill to allow for it being a quarantine hotel. Total chaos.’

Other guests criticised the hotel’s lack of organisation during the fire alarm, and described conditions as ‘unsafe’.

Robert Lee, who had arrived at the hotel just hours before, was told he was not able to leave his room by security guards despite the fire alarm going off around him.

Mr Lee explained that he was finally able to leave his room ‘an hour later’, but there were no senior managers around and hotel staff still are ‘unaware’ of who made it out of the hotel.

Sally Buckmaster tweeted: ‘Chaos at Gatwick Sofitel with guests told to stay in their rooms during a fire alarm and then evacuated in unsafe conditions and left to stand in the freezing cold’.