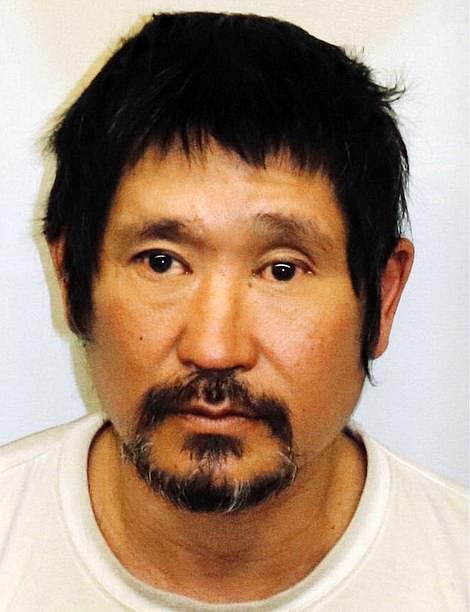 Craig Tamanaha, the 49-year-old alleged arsonist who torched Fox News’  Christmas tree, is back on the streets just hours after his arrests because all of his charges are misdemeanors, meaning that a judge can’t set bail

The 49-year-old ‘arsonist’ arrested for setting fire to the Fox News 50-foot Christmas tree is back on the street less than 24 hours after his arrest because of the city’s lenient bail reforms.

Craig Tamanaha was seen on video being arraigned and released after allegedly torching Fox News’ All-American Christmas Tree on 47th Street and Avenue of the Americas in Midtown Manhattan.

Tamanaha, who is described as homeless and ’emotionally disturbed’, faces six misdemeanor charges for torching the tree and under the 2020 criminal justice reforms that means judges are advised to release the accused.

The accused arsonist – wearing a blue jacket and jeans – was asked what happened and appeared incoherent.

‘You see, the mother society that raped the daughter’s mom, they set it on fire,’ he said.

‘Ask the moms who molest their daughters how they feel about it.’ It was not clear what this was in reference to.

Tamanaha then asked for a cigarette and said he was going home. He added that he didn’t do it before leaving.

The 49-year-old not only has several previous arrests on his record, he was recently arrested for exposing himself outside the Ghislaine Maxwell trial in the city.

Tamanaha was detained back in November for exposing himself in front of the United States Court House in Manhattan as Maxwell’s sex trafficking trial was going on inside.

An NYPD spokesperson said that Tamanaha had three prior arrests: two earlier this year in March for controlled substances in March and one in 2015 for an open container.

Arson is only constituted as a felony in New York if the perpetrator harms or attempts to harm a person or if the act is considered a hate crime.

Fox News employees called police after watching Tamanaha climb the tree at 12.14am Wednesday and set it on fire. He tried to scramble away, but was taken into custody.

‘There’s no question that the legislature has got to reevaluate the nooks and crannies of the bail statute because it’s leading to absurd outcomes,’ Mark Bederow, a former Manhattan prosecutor turned criminal defense lawyer, told Fox News.

In order for a judge to set bail, Tamanaha would have to have been charged with at least third-degree arson, which constitutes a hate crime.

‘You’d have to intentionally damage a building or vehicle by starting a fire or explosion as a hate crime, which is an extraordinarily high bar for bail eligibility. Having a personal bias or animus toward Christmas doesn’t legally cut it,’ Bederow added.

When a suspect is released on bail for a crime against another person, that person can be granted an order of protection to make sure the suspect stays away from them.

But there is no legal order a judge could give to prevent Tamanaha from approaching the Fox News tree again. ‘You can’t give the Christmas tree an order of protection, so security will have to stand guard,’ Bederow told Fox News.

Tamanaha caused about $500,000 in property damage, sources told the New York Post. It is still unclear why he targeted the Fox News tree. NYPD detectives told DailyMail.com that it was a completely random act and not politically motivated against Fox News or News Corp, which owns The New York Post and The Wall Street Journal. 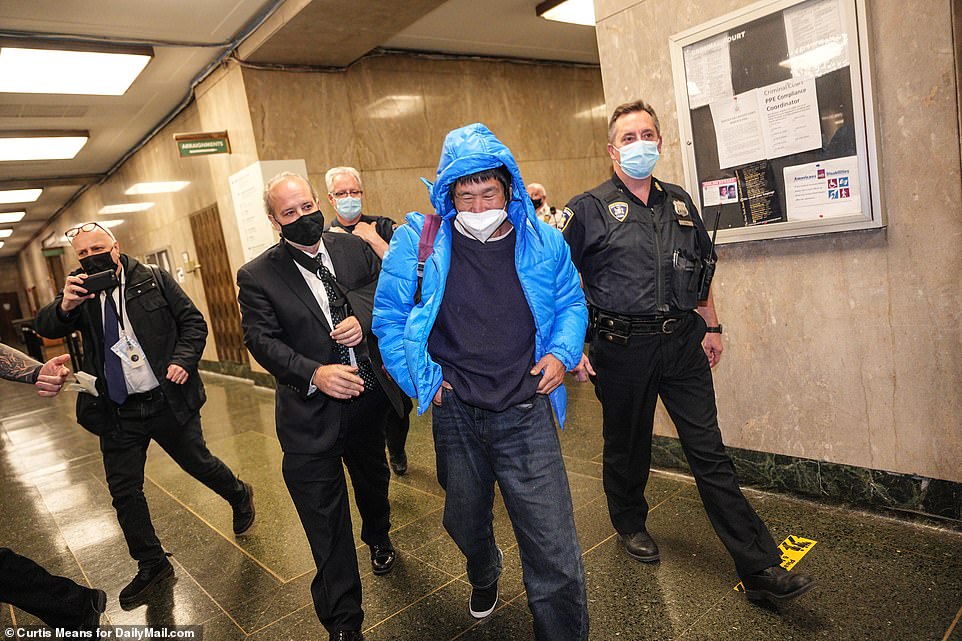 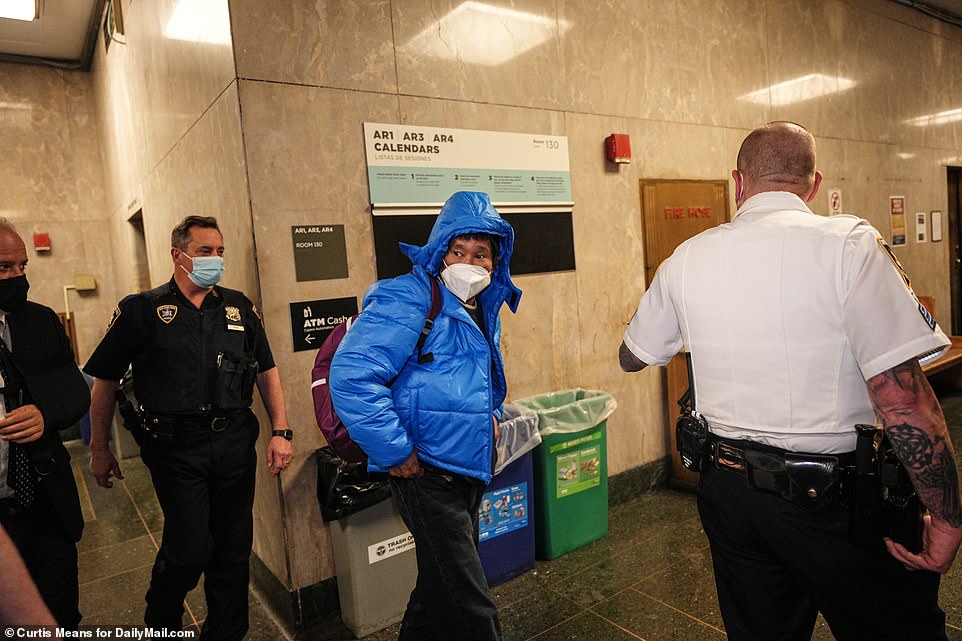 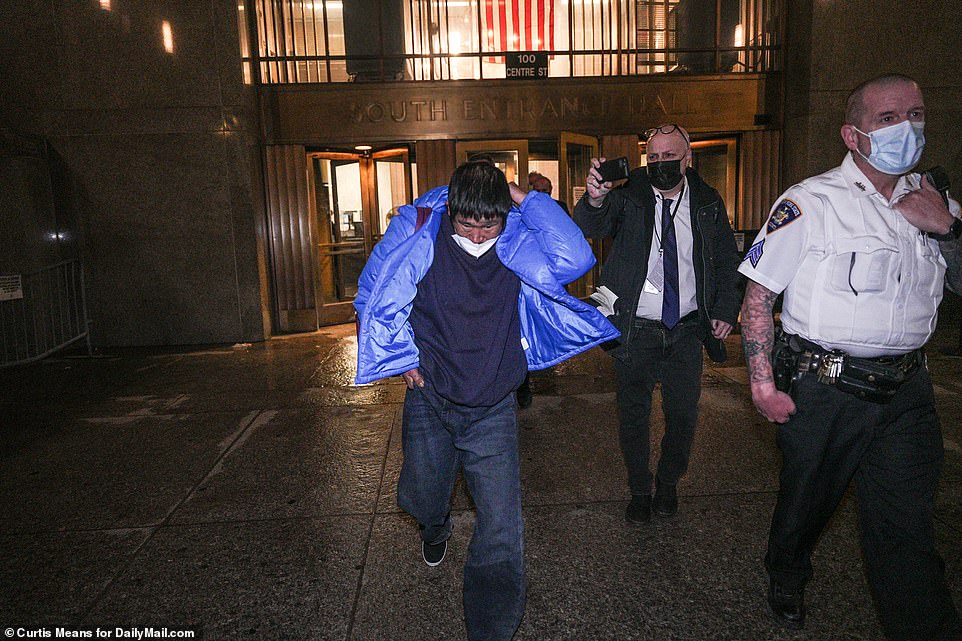 Tamanaha asked if anyone had a cigarette and said he was going home. He added that he didn’t do it before leaving 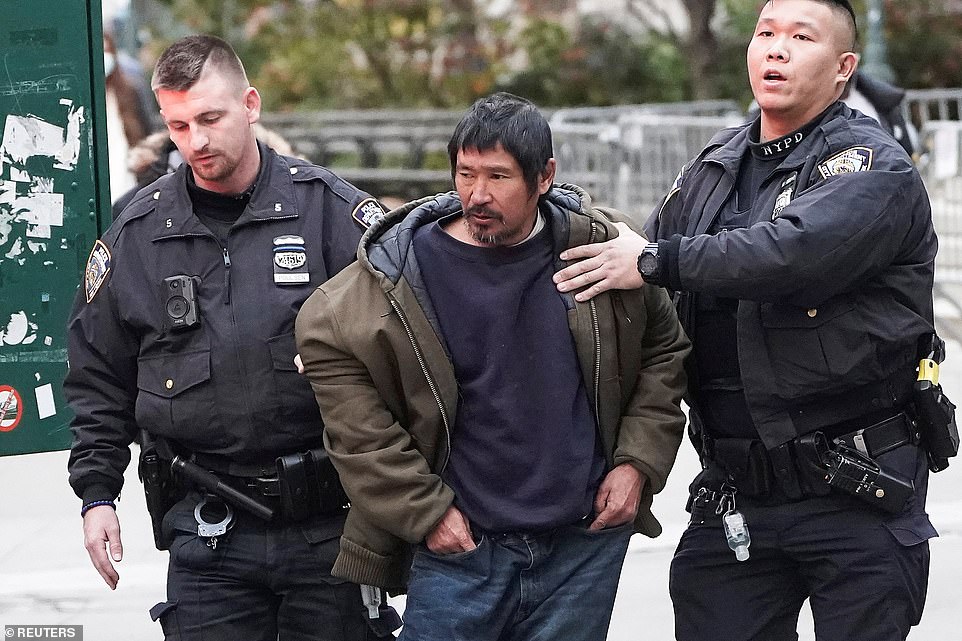 Craig Tamanaha, who was later charged with setting fire to a Christmas tree outside the Fox News headquarters, is detained by police after exposing himself outside the court at the trial of Ghislaine Maxwell 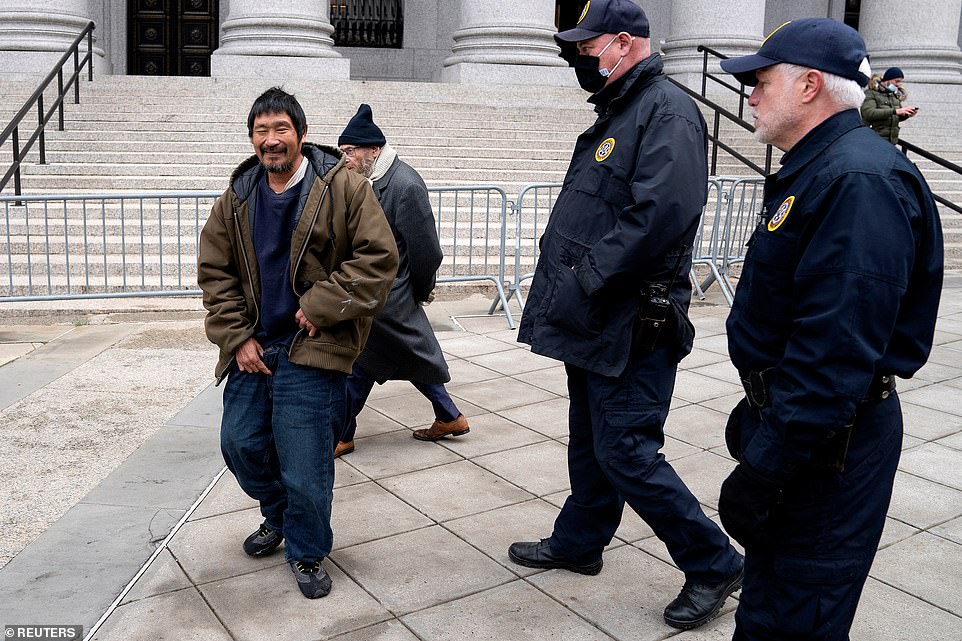 An NYPD spokesperson said that Tamanaha had three prior arrests: two earlier this year in March for controlled substances in March and one in 2015 for an open container 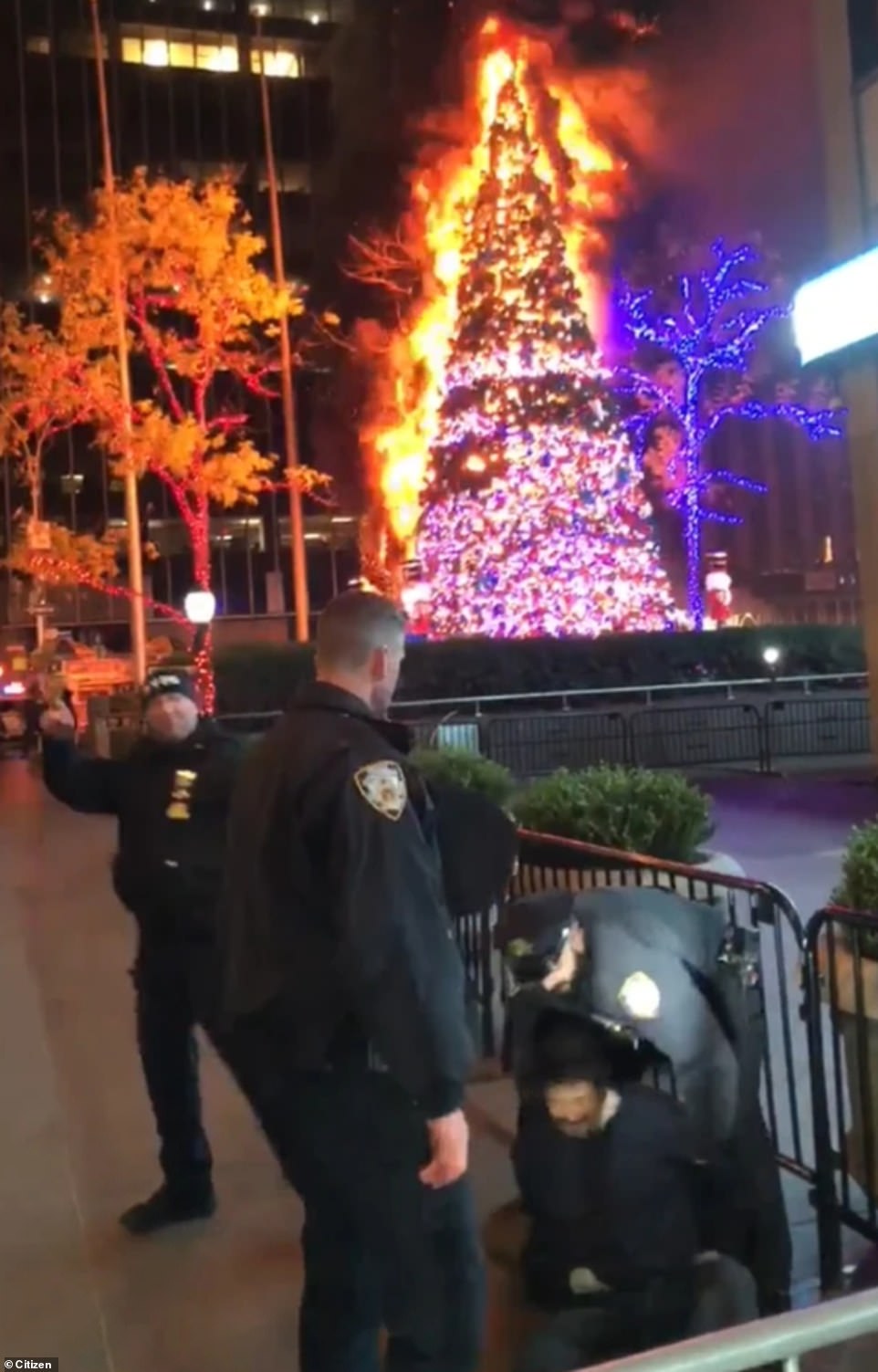 Arson is only constituted as a felony in New York if the perpetrator harms or attempts to harm a person or if the act is considered a hate crime, meaning that Tamanaha was free to go. He is above being taken into custody outside the News Corp building on Tuesday night 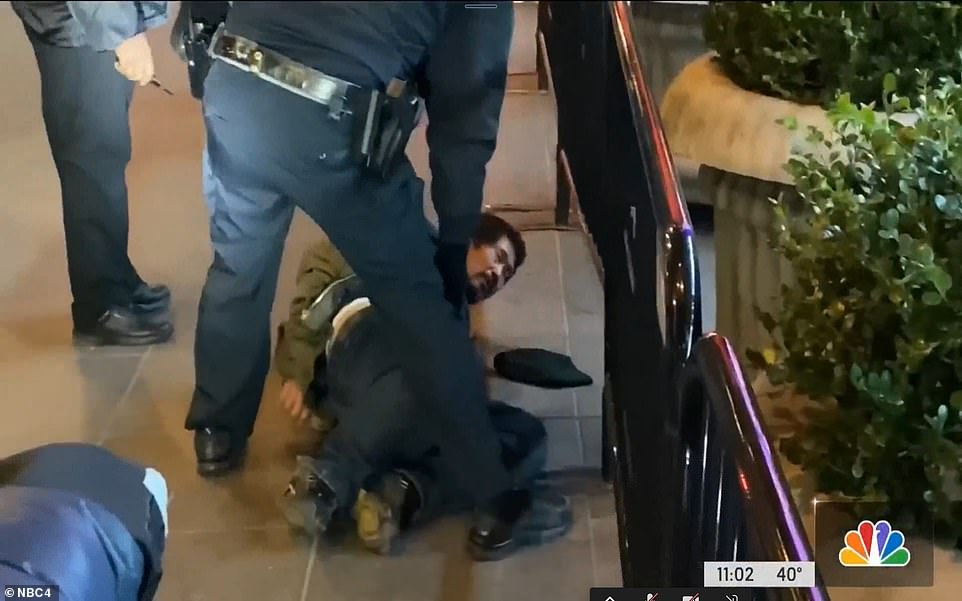 Fox News employees watched as he climbed the tree and then as he tried to run away. It remains unclear exactly what he used to set it on fire 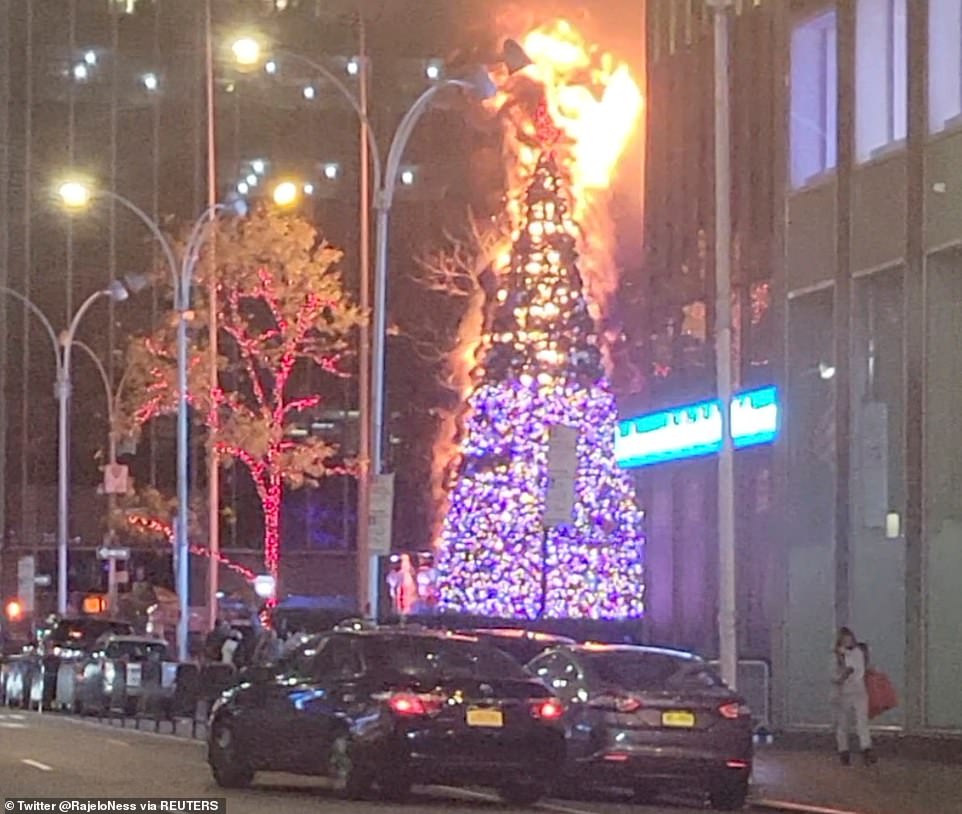 Tamanaha could have been held by a judge for a psychiatric evaluation if he is experiencing mental illness. He was released from custody at the Midtown North Precinct.

It’s unclear how long Tamanaha had been living in the city; he has two prior arrests with the NYPD – one in February and one in March and both were for drugs possession.

Tamanaha is listed as having an address in Brooklyn, but regularly loiters in the area, police said.

‘It’s an individual that’s known to us — he has a series of low level arrests and drug arrests. He was issued some earlier this year — some appearance tickets and didn’t come back to court, which unfortunately is something we see all too often. He also has some low-level arrests out of state — I believe it’s Texas,’ Police Commissioner Dermot Shea told ABC 7.

‘I think it’s definitely one where he’s working alone. That’s what it appears. This is all very fresh … It’s probably a little preliminary to say what the motivation was — was mental illness a factor? We’re looking at all of that and we’ll probably have more to say,’ Shea added.

He had a lighter in his possession when he was arrested but the FDNY has not been able to confirm yet if that’s what he used to set fire to the tree.

The incident is another sad example of the senseless and random crime that is ravaging the city and is likely to deter tourists this Christmas, the first holiday season that New York has been able to welcome international visitors since 2019. 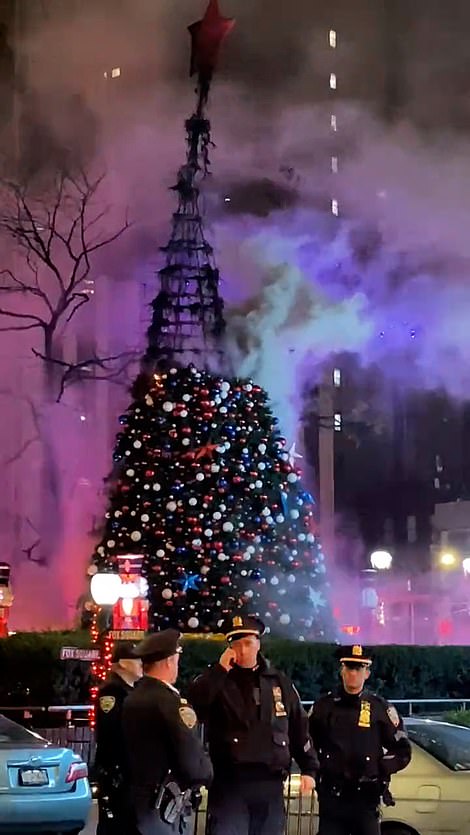 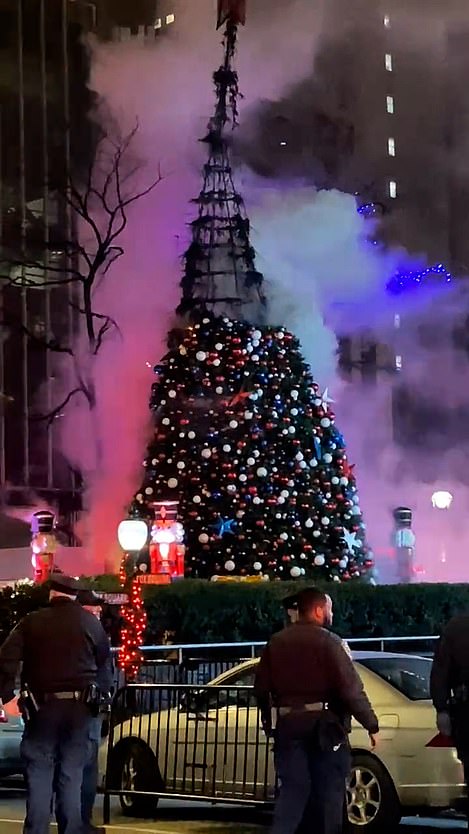 Plumes of black smoke billowed from the festive display after it was set ablaze shortly after midnight in Fox Square, by the building which houses Fox News 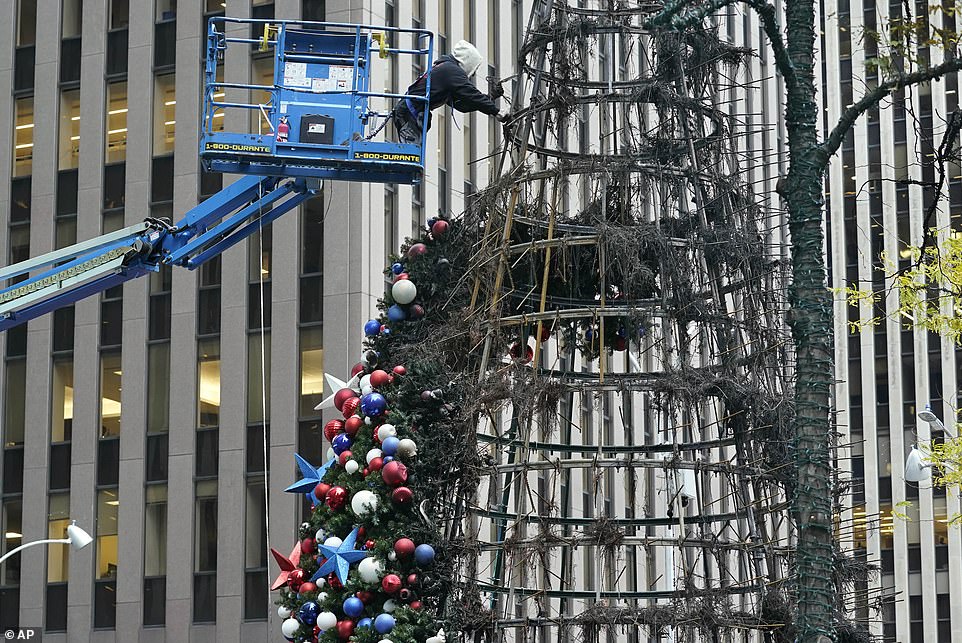 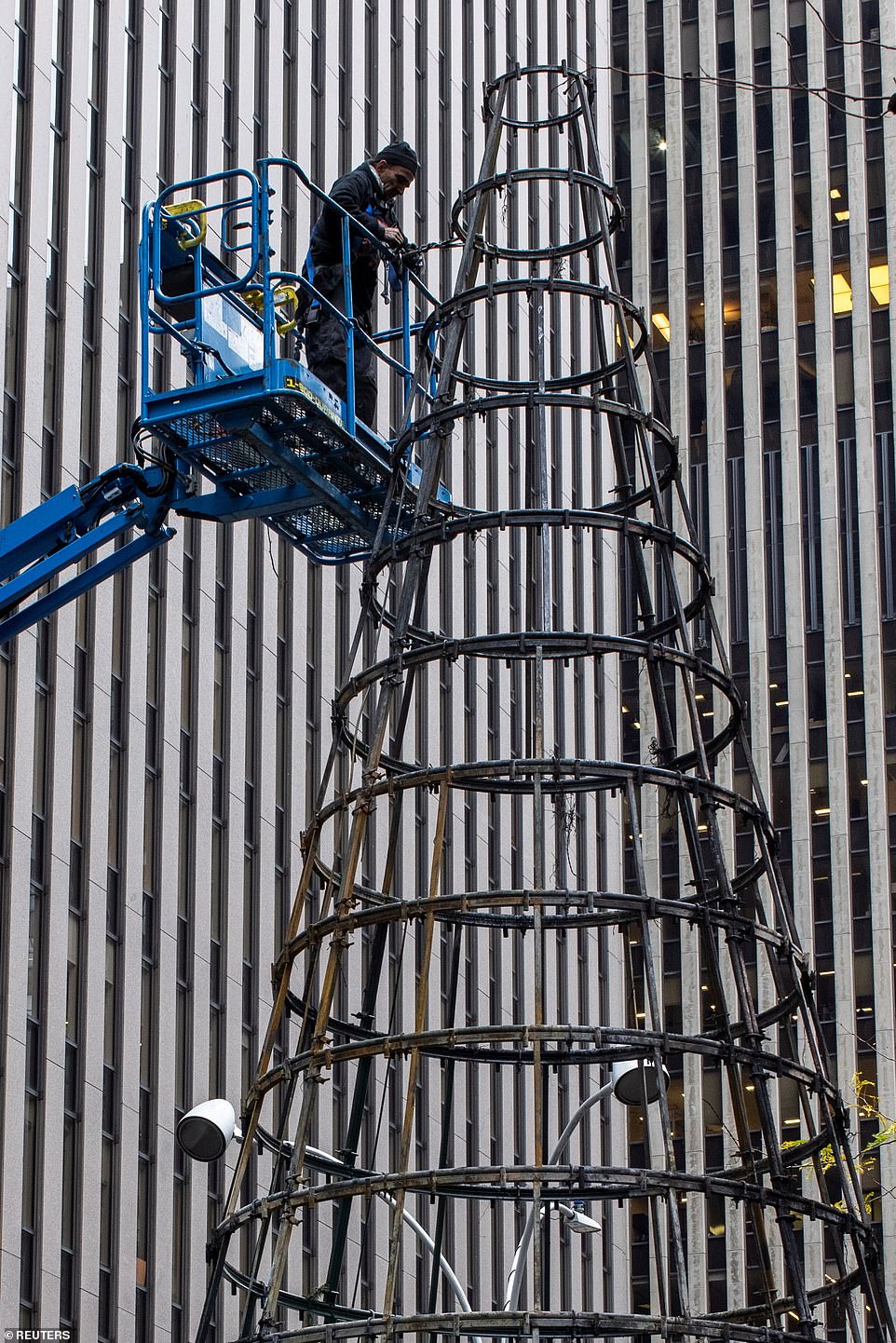 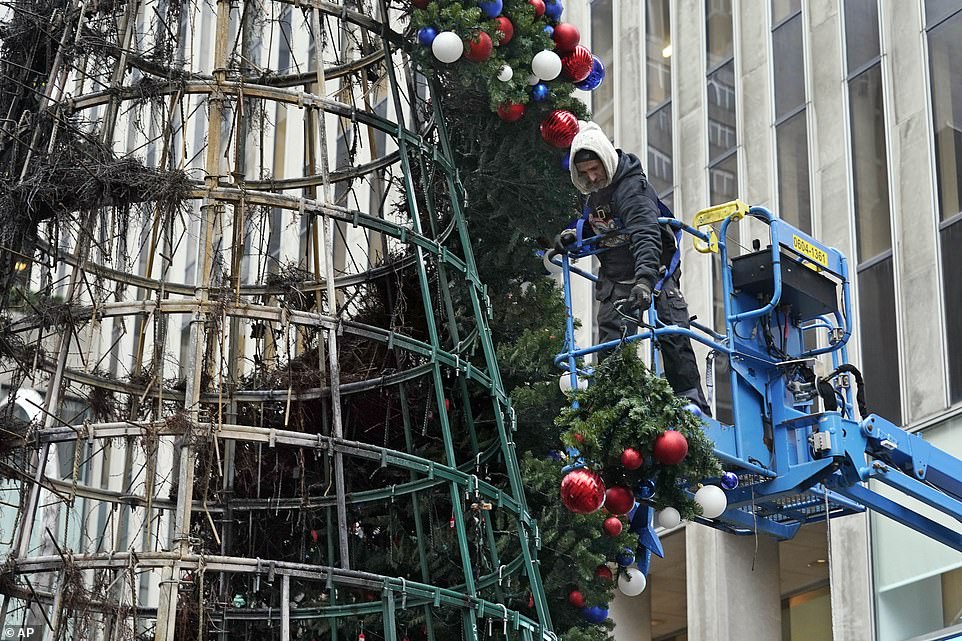 A worker on a crane disassembles the decorations around the Christmas tree outside Fox News headquarters, in New York, Wednesday 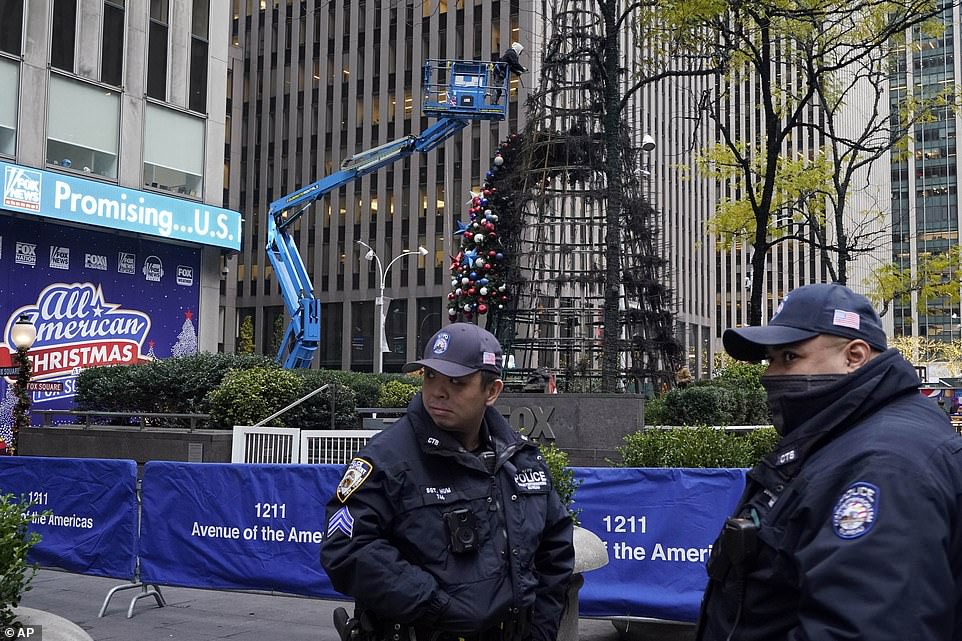 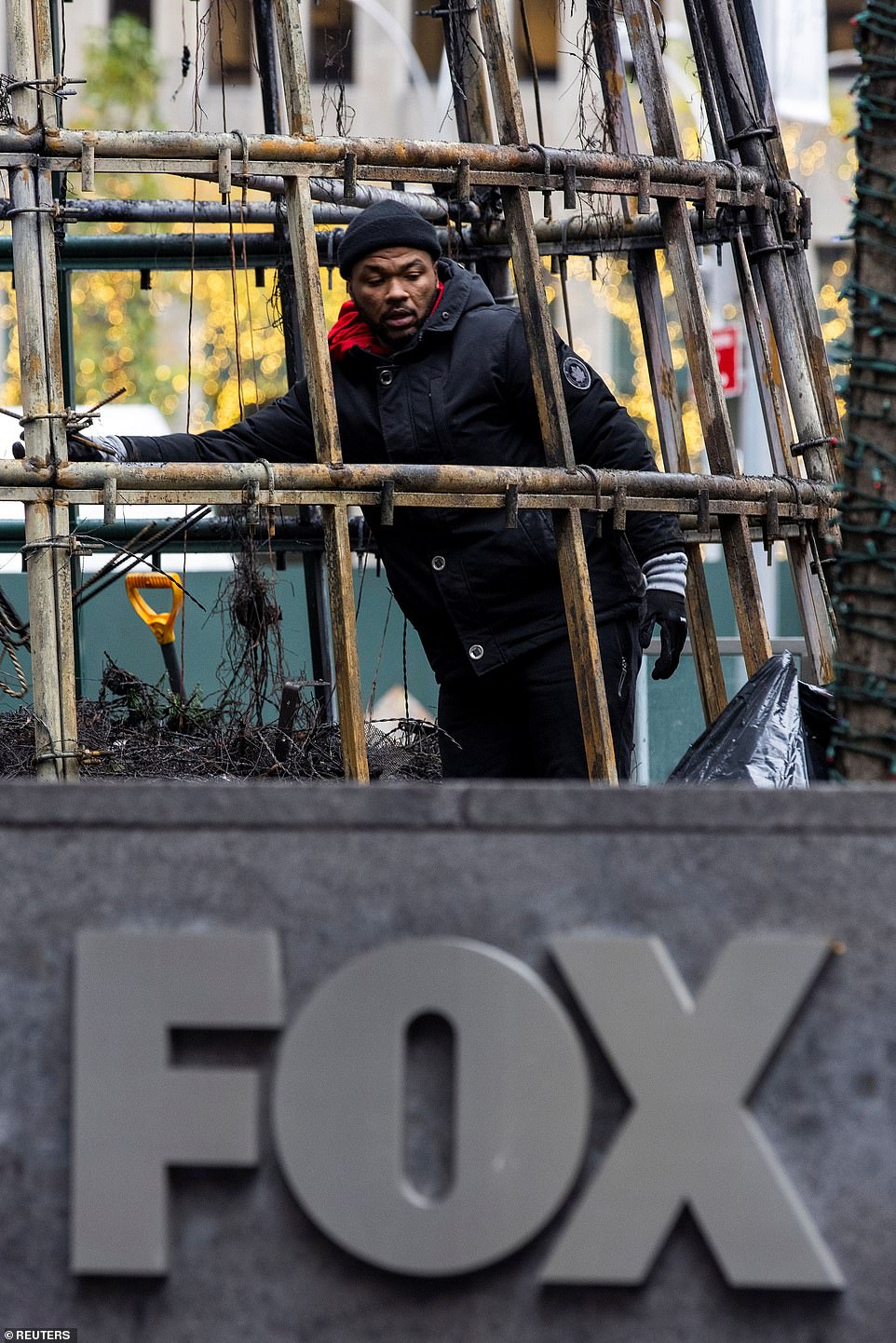 An employee stands inside the charred remains during the clean up after the fire. NYPD detectives tell DailyMail.com that it was a completely random act and not politically motivated against Fox News or News Corp, which owns The New York Post and The Wall Street Journal 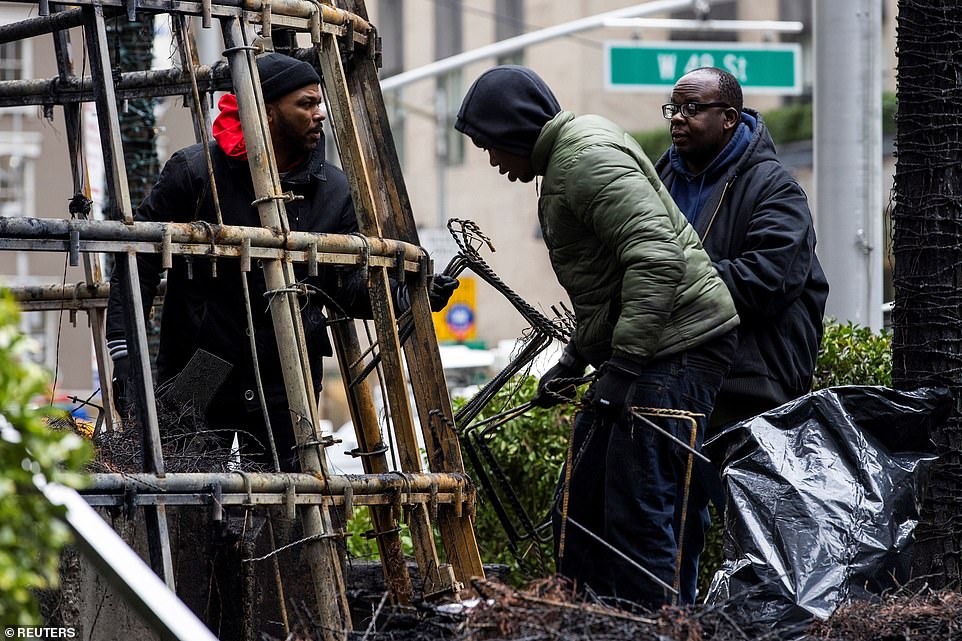 Workers clean up the burnt remains of a Christmas tree outside the News Corp. and Fox News building in New York City after the fire which ripped through the 50ft giant last night

Crime is soaring all over the city with violent attacks on subways and random assaults in the street happening far more frequently than in the past two years.

Outgoing Mayor Bill de Blasio has been largely blamed for the surge in violence, after softening bail reform to let criminals out of jail early then moving homeless people out of shelters and onto the streets or into hotels during the height of the pandemic.

His term ends on December 31. Mayor-elect Eric Adams, a former NYPD cop and a Democrat like de Blasio, has promised a crackdown on crime.

Three nearby Christmas trees which were also decorated with lights were damaged by the blaze. 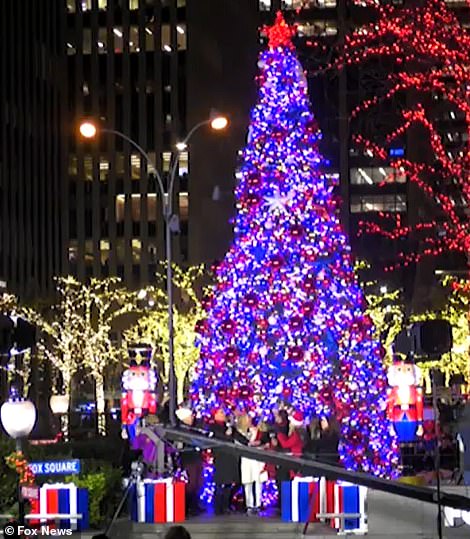 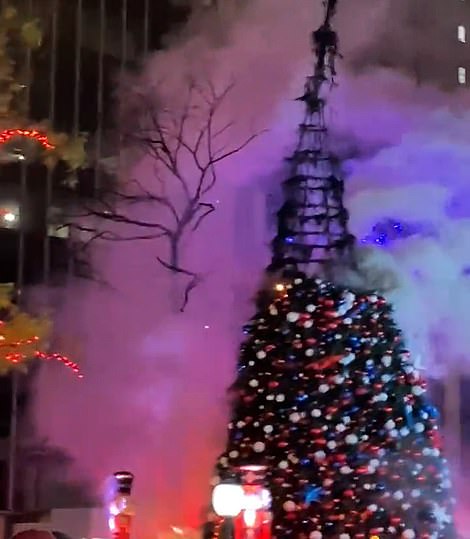 The red, white and blue decorations (shown, left, before the tree was set on fire) and (right) after the assault on Tuesday night

Police cordoned off the square as FDNY firefighters extinguished the fire. 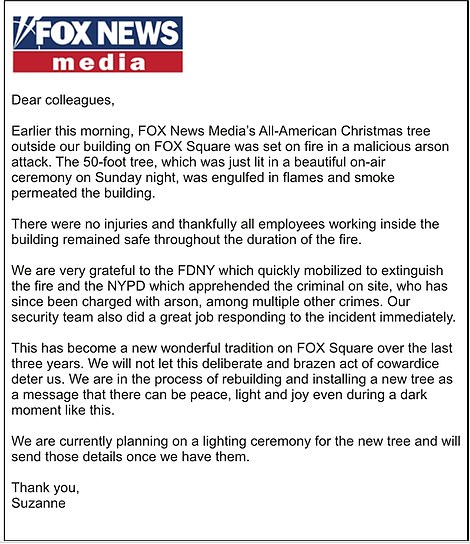 ‘Units responded to 1211 Ave of the Americas at 00:14 hours for a report of a rubbish fire. FDNY members extinguished a tree on fire in front of location.

‘No injuries, fire marshals to investigate,’ the FDNY said on Wednesday morning.

‘On Wednesday, December 8, 2021, at approximately 0014 hours, a 49-year-old male was observed by Fox News Channel security climbing the Christmas tree decorated outside their office building near the corner of West 48 Street and Sixth Avenue, within the confines of the Midtown North Precinct.

‘Upon arrival, officers observed the male running from the location and he was taken into custody without further incident. The fire within the tree was extinguished without further injury or incident by responding FDNY personnel.

‘The male suspect was removed to the MTN Precinct where he will be processed; there was a lighter removed from his person, but it’s unclear if there were any accelerant used.

‘The cause of the fire is to be determined by NYC Fire Marshall, there are no injuries reported and the investigation is ongoing,’ an NYPD spokesman said.

The tree had been lit Sunday during an ‘all-American Christmas tree lighting’ ceremony. 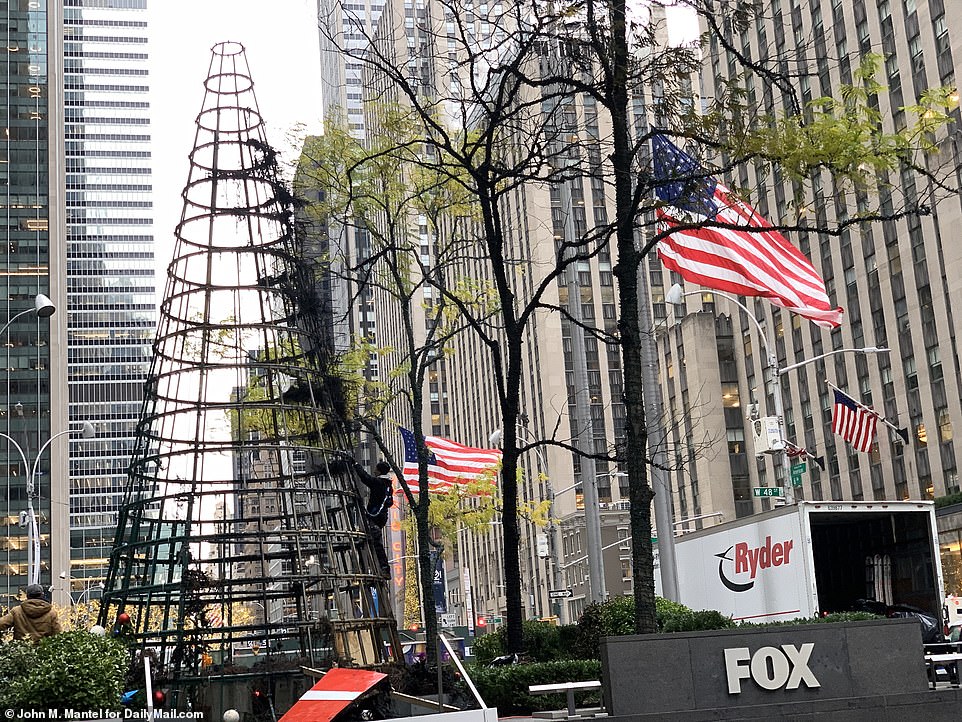 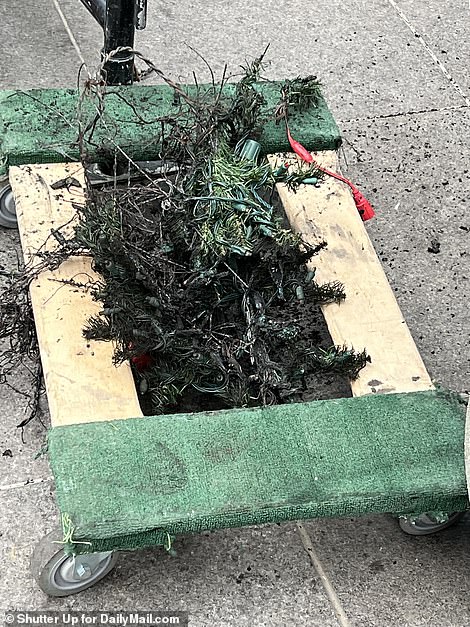 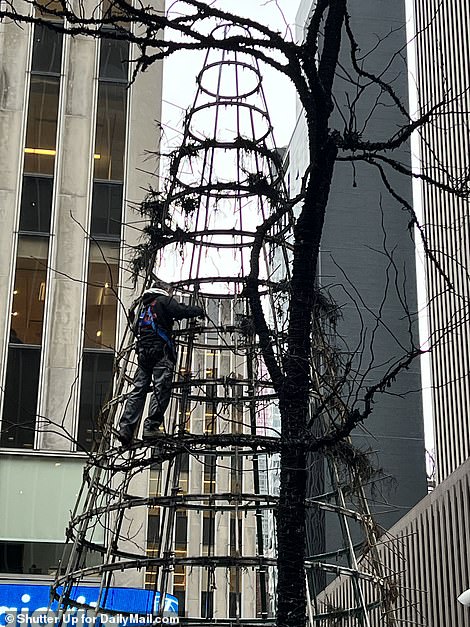 Workers removed charred branches and lights from the tree’s metal structure on Wednesday morning. A new one will go up this week 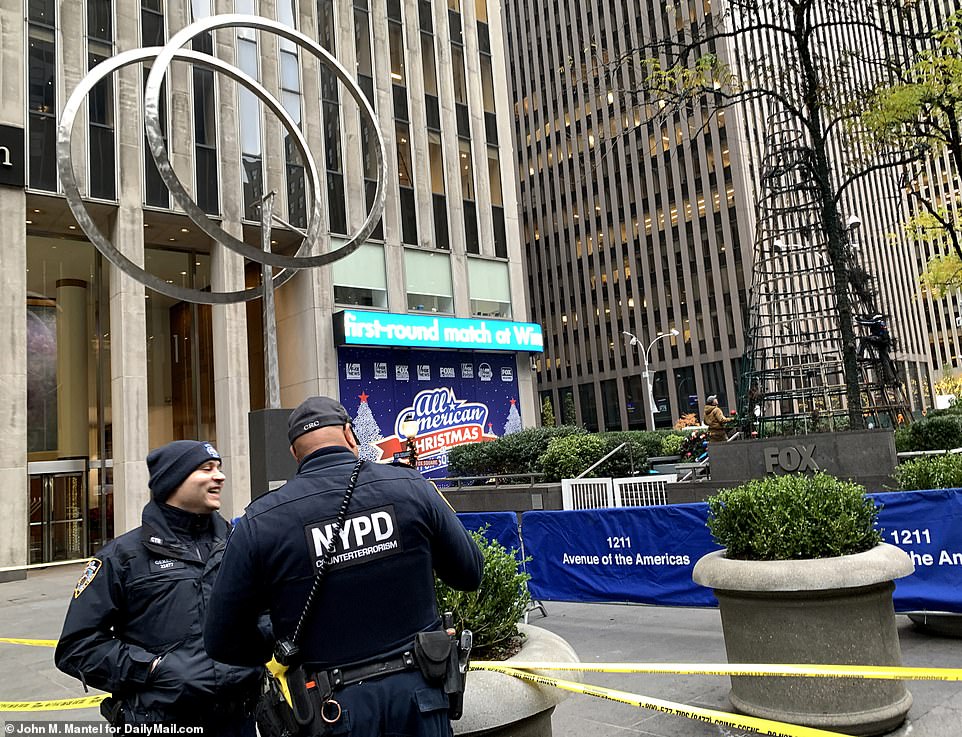 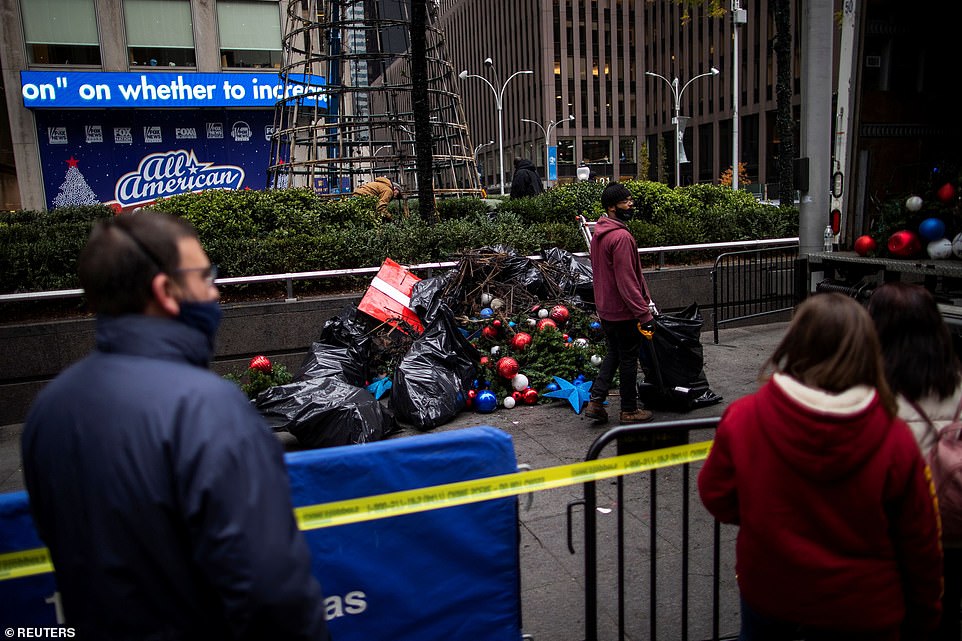 A huge pile of burned decorations grows outside the News Corp. and Fox News building in New York City

Fox & Friends host Steve Doocy said at its unveiling: ‘When we walk in at three and four o’clock in the morning on weekdays to go to work, the music is so orchestral, so dramatic, and so big, it just puts you in the Christmas spirit as you walk through the crossroads of the world.

‘We will not let this deliberate and brazen act of cowardice deter us.’

The company will rebuild and install a new tree this week. 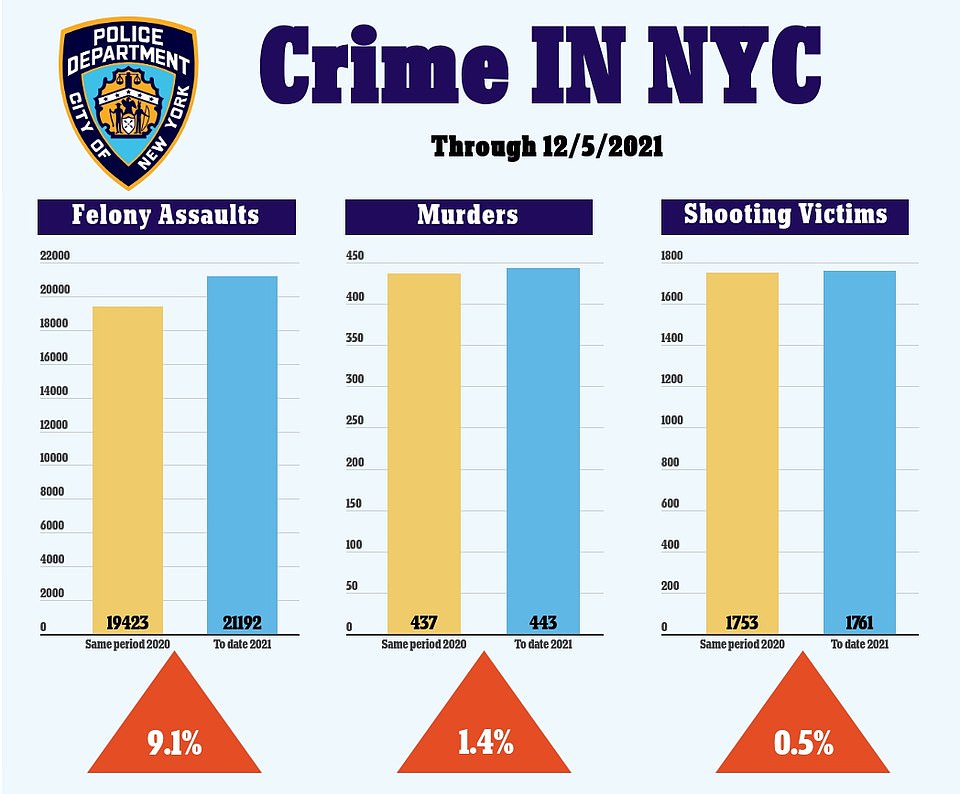