The leader of a New Age cult whose mummified body was found surrounded by fairy lights in a Colorado home in April died of alcohol abuse, anorexia and long-term dosing of colloidal silver, her autopsy has revealed.

Amy Carlson, a 45-year-old former McDonald’s employee from Texas, was known by followers of Love Has Won as ‘Mother’ or ‘Mother God’.

She had left her three children and husband behind when she moved to Colorado, and in 2018 founded the sect.

Her autopsy, published Thursday, showed she died of anorexia, alcohol abuse and the effects of colloidal silver – a ‘dietary supplement’ of tiny particles of silver floating in water, which quack doctors sell to cure COVID, cancer, HIV and AIDS.

In her final photos, posted to Facebook – where the cult’s 20 full-time members and hundreds of other admirers shared memes and musings – Carlson is seen looking emaciated and with a strange blue tint to her skin.

When her body was found, it seemed initially as if her eyes had been removed, but forensic analysis later found they had simply decomposed.

She had told Dr. Phil in September 2020 that she had cancer.

Amy Carlson is seen in the last-known photo of her, with the blue tinge to her skin from the silver distinctly visible. Her skeletal frame was the result of anorexia and alcohol abuse, an autopsy found, and she had no sign of cancer 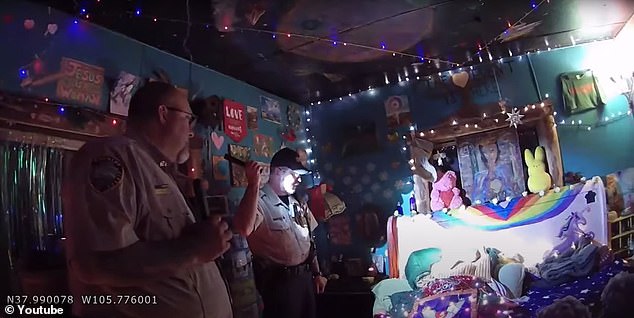 Police in Crestone, Colorado, are seen on April 28 finding Carlson’s body in the bed, wrapped in a sleeping bag and surrounded by fairy lights 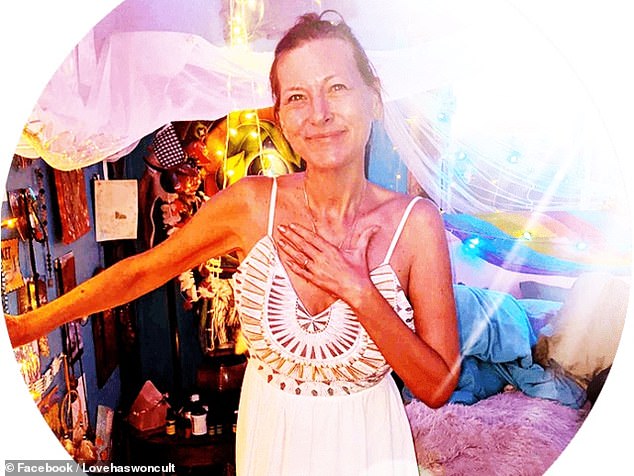 Carlson founded the cult in 2018, with followers believing she was 19 billion years old and a daughter of Donald Trump. Her supporters believed she existed as a ‘higher consciousness’ than other humans and would lead a group of 144,000 people to the ‘fifth dimension,’ a heavenly place beyond the ‘regular world’

There are no known medical benefits, and those who take it find the silver building up in their bodies, making it hard to absorb antibiotics and other medicines; damaging the stomach and liver; and causing an irreversible condition called argyria, whereby the skin is tinged blueish grey.

She was 5-feet4-inches tall, and weighed 75 pounds.

The autopsy was carried out by Emily Russell from the El Paso County Coroner’s office in Colorado Springs.

‘Based on the information available to me at the time of report it is my opinion that Amy Renee Stroud (Carlson), a 45-year-old adult white female, died as a result of global decline in the setting of alcohol abuse, anorexia, and chronic colloidal silver ingestion,’ Russell wrote, according to The Guru magazine.

She wrote that Amy was ‘mummified and adorned with make-up and a crown.’

The autopsy ruled the manner of death as ‘natural’ 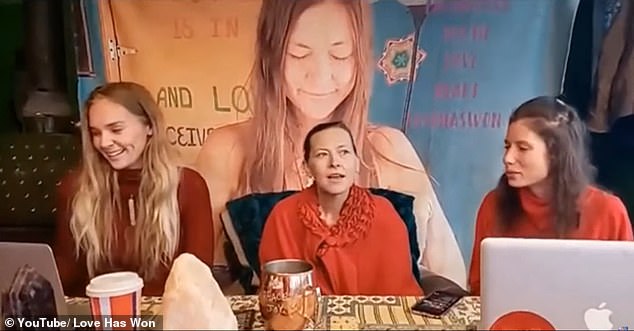 Carlson is seen in December 2019, on the YouTube channel where they frequently shared their beliefs

When she was found, she had been dead for around a month, having died in California, the magazine reported. Cult members then took her body to a house in Crestone, Colorado, owned by Miguel Lamboy, a member of the group who was traveling.

He arrived back at the Colorado house, found Carlson’s mummified body, and then reported it to the police.

On April 28, police body cam footage showed officers in Crestone entering the house and being welcomed by a man who, when asked where Carlson was, said: ‘Mother is in resting. She has rested.’

The officers arrested seven adults, charging them with abuse of a corpse. The also faced child abuse charges after law enforcement found a 13-year-old and two-year-old in the house.

At the back of the house they found Carlson’s corpse, wrapped in a green sleeping bag and covered in glittery makeup. She was wearing a golden crown, encrusted with blue and green stones, and had several necklaces and pendants around her neck.

One officer guffawed with laughter when he found the corpse amid the surreal scene.

She had a a tie-dye fleece shawl around her shoulders and a faux-fur scarf and bandana around her neck. She was in grey sweatpants, and on her feet had two pairs of fluffy socks. 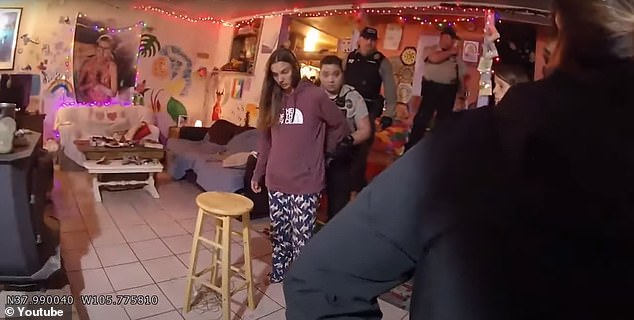 Seven arrests were made at the house in Creston, Colorado, on April 28 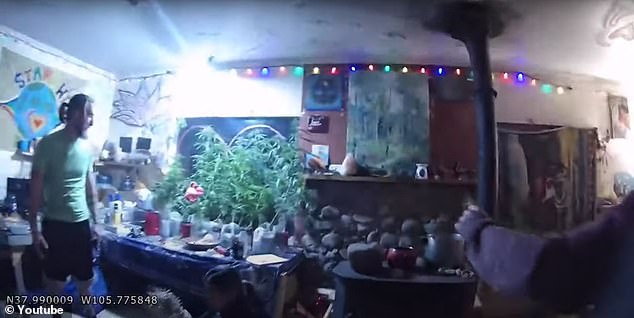 The cult members were taken into custody without incident 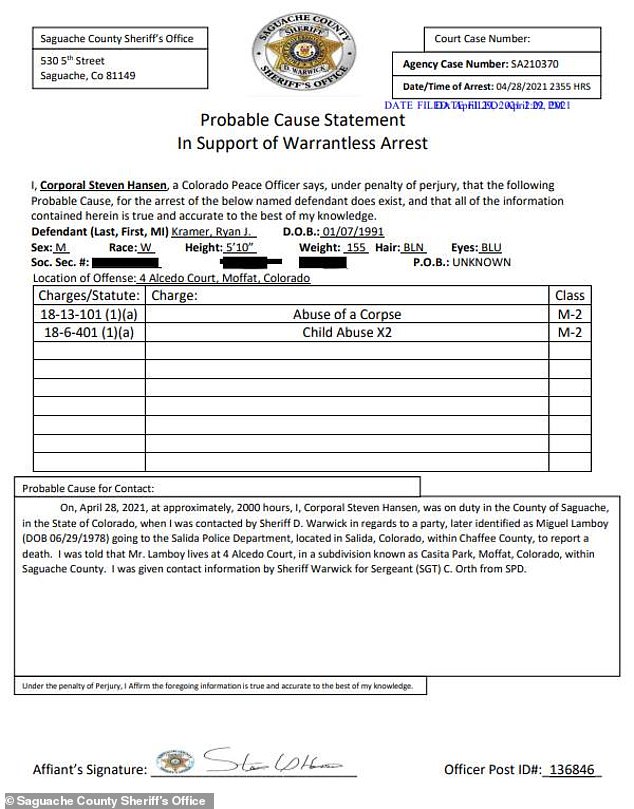 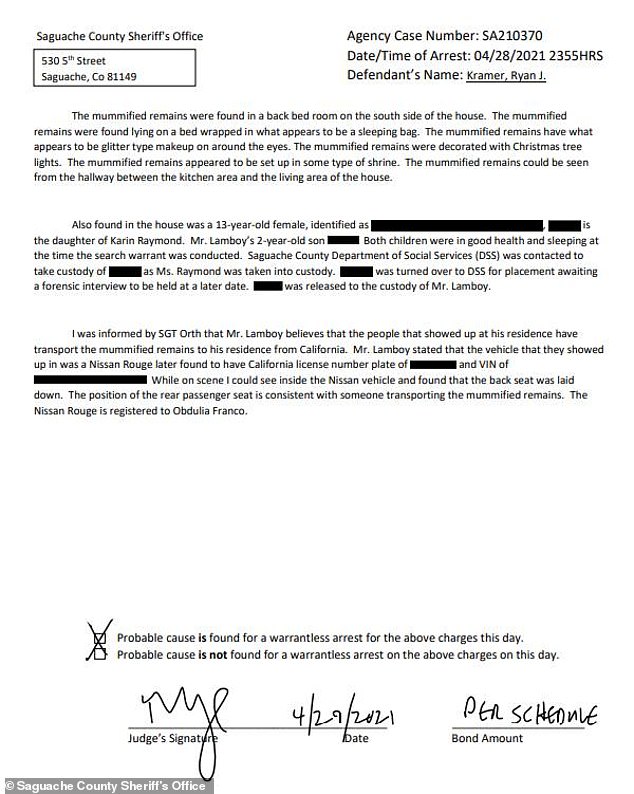 By her body were ‘eight small brown bottles with medicine droppers that were colorfully labeled,’ which were retained as evidence. 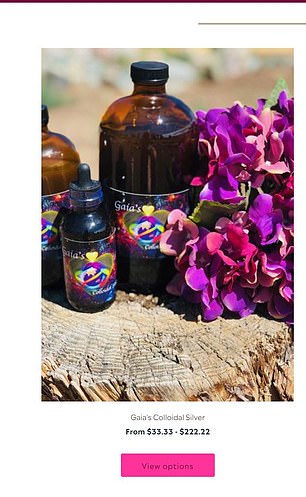 The bottles contained various metals, including colloidal titanium, gold, and silver, among others.

Carson told her followers that she lived in a mythical, ancient land of Lemuria, and she recovered a ‘special, obscure technology’ that was stolen and ultimately sank the mythical city of Atlantis.

Her followers believed she was 19 billion years old and was the reincarnation of Jesus, Joan of Arc, Marilyn Monroe and Cleopatra, among others.

She also claimed to be the child of Donald Trump.

Her supporters believed she existed as a ‘higher consciousness’ than other humans and would lead a group of 144,000 people – a nod to Abrahamic beliefs – to the ‘fifth dimension,’ a heavenly place beyond the ‘regular world.’

But she had said humanity wasn’t ready ‘to ascend,’ and she would continue to return to Earth until humanity is ready.