After 14 years of calling this place home, Scott Brown’s long-awaited return to Parkhead in a different colour of jersey lasted all of 65 minutes.

A suitably warm ovation followed him off the pitch as he retired hurt to be replaced by Austin Samuels. By then, however, his successor as Celtic captain had already ensured this would not be a happy comeback. The pressing needs of the present at Parkhead trumped any sense of nostalgia.

A midfielder of exceptional poise, Callum McGregor will score many prettier goals than the fortuitous 60th minute rebound that put Ange Postecoglou’s side back in front. This season, though, he might not produce many of greater significance. 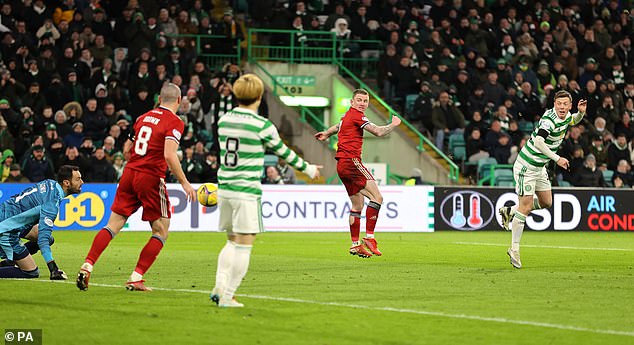 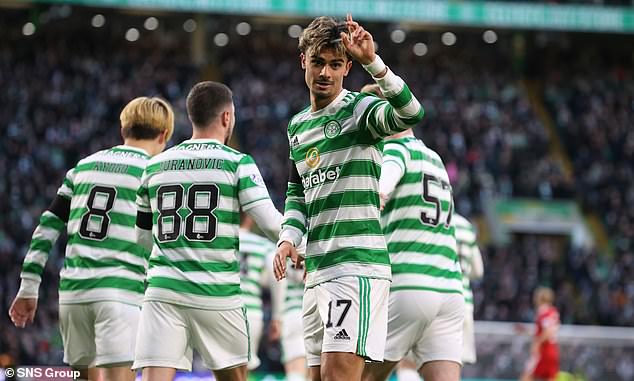 Fresh from exiting the Europa League on Thursday evening, losing ground in the Premiership title race would have stalled Celtic’s momentum. McGregor was in the right place at the right time to ensure the accelerator remained engaged. Blocking a Jonny Hayes clearance into the Aberdeen net, the 28-year-old kept his side within four points of leaders Rangers.

McGregor had spoken sincerely of his debt to Brown, extolling his virtues as a leader but making it clear any sentiment would have to be parked in pursuit of victory. His predecessor wouldn’t have expected anything else.

Celtic wobbled for a bit after Lewis Ferguson stuck a first half equaliser from the penalty spot but no one could really dispute they deserved the win overall.

Jota scored his fifth goal in five games to put them in front. Once again, the Benfica loanee was a stand-out performer. He may be growing slightly weary of questions about his future, but the more he sparkles the more they will continue. His agreement is obviously required for Celtic to take up the £6 million option they hold for a permanent deal. 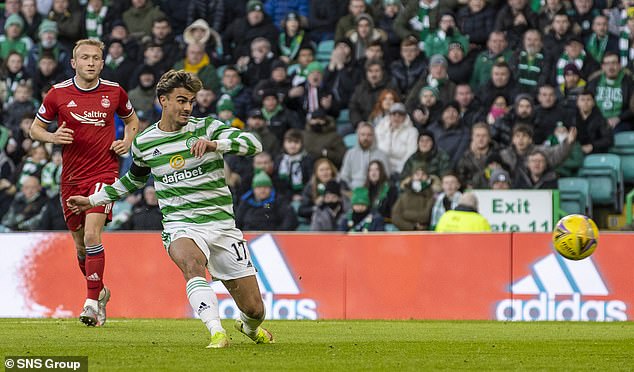 Once again, the Benfica loanee was a stand-out performer for the hosts at Celtic Park

While Postecoglou could reflect with satisfaction on the outcome, there was only further frustration for counterpart Stephen Glass. It’s now two wins in 16 for Aberdeen, who remain eighth. They weren’t bad here, but clearly results will have to pick up to prevent pressure engulfing Glass once more.

The prelude to an intriguing first half was dominated by tributes to Bertie Auld, who was laid to rest last Friday.

A montage of moments from the Lisbon Lion’s extraordinary life filled the large video screen inside Parkhead. McGregor and Brown then walked out together to lay wreaths on centre-circle – covered by a giant no.10 and the words ‘That’s Entertainment’ – before the teams gathered to take part in a minute’s applause.

It looked as though Celtic might channel that emotion into a dominant display. Ahead on 20 minutes, they pulled Aberdeen out of shape with some nice variation in their attacking play. 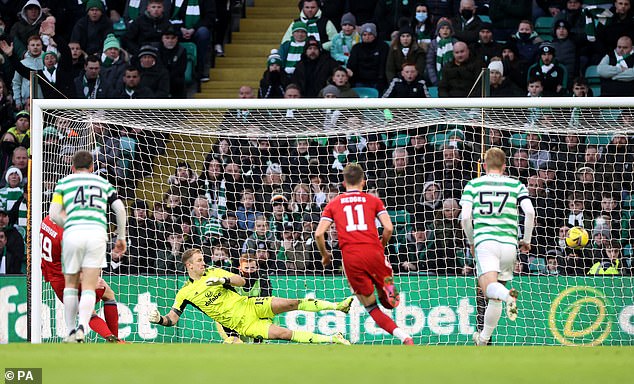 Jota was at the heart of their threat. As he tends to be these days. A seventh goal of the season added yet another reason for Celtic to pursue his longer-term addition.

There was real quality in its creation. David Turnbull produced a perfect pitching wedge of a pass, lofting the ball over the Aberdeen backline to find the advancing McGregor.

Celtic’s captain had drifted into space behind visiting right-back Jack Gurr and incisively knew Jota would make an infield run. A quick cut-back put the ball in front of the Benfica loanee for a strike that nicked off David Bates on its way into the net.

An early injury scare for Joe Hart had been the Parkhead side’s only issue by this point. Clattered by Christian Ramirez when gathering the ball, the ex-England goalkeeper required several minutes of treatment before being cleared to continue. Scott Bain had been preparing to come on but zipped up his tracksuit jacket again after Hart made it clear he was okay.

With Jota giving Gurr a torrid time, the expectation was of Celtic pushing hard to quickly double their advantage. Aberdeen’s form didn’t suggest excessive resistance, but instead they reacted vigorously to going behind. By being braver on the ball, momentum shifted. 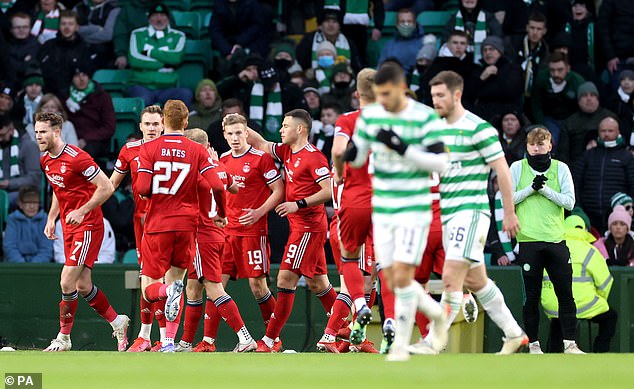 Marley Watkins offered the first indication with a teasing cross that Josip Juranovic had to hack off the line. The winger was then involved in a nice interchange on Aberdeen’s right, firing in a low shot that Hart had to push wide.

The resulting corner led to a 33rd minute leveller. Bates actually took a bad touch trying to deal with Dylan McGeouch’s delivery, but was given a way out when Liel Abada stuck out a leg. The centre-back topped over Abada’s thigh and referee Kevin Clancy immediately pointed to the spot.

Ferguson was nerveless in his penalty execution. Sending Hart the wrong way, he slammed the ball into the net for his seventh goal of the campaign.

Stephen Welsh got in the way of Kyogo Furuhashi as they both went for a headed opportunity just before the break, but Celtic didn’t exactly bombard Aberdeen after being pegged back. Postecoglou needed to find a way to reintroduce a spark.

A half-time pep talk prompted his side to restart on the front foot. McGregor’s thunderous drive was bravely blocked on the line by Ramirez, pole-axing in the American in the process. Then some slick play on the left led to Juranovic dragging a low shot fractionally wide of the near post. 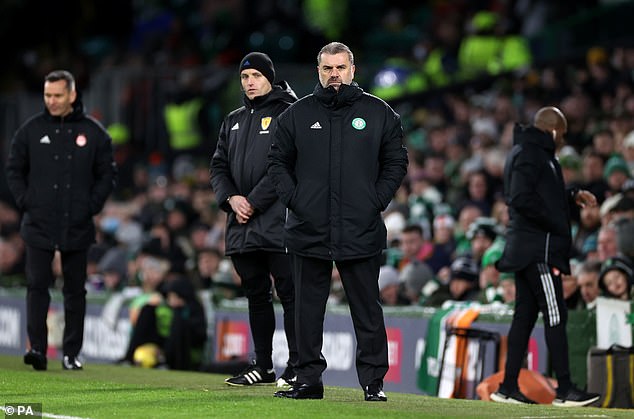 The Pittodrie men were back under the cosh. For sure, there was good fortune about the way Celtic recaptured the lead on the hour mark. But it had also been coming.

Making just his third Premiership start of the season, James McCarthy swivelled before feeding Abada with a nicely weighted pass.

Joe Lewis blocked at the feet of the winger but when Jonny Hayes tried to complete the clearance, the ball cannoned off McGregor and rebounded into the net. The Scotland midfielder hared off to the touchline in delight, pursued by team-mates. Parkhead breathed a sigh of relief.

Stephen Welsh saw a header tipped over by Lewis, before Juranovic nodded away a Ferguson effort in Aberdeen’s final moment of threat. 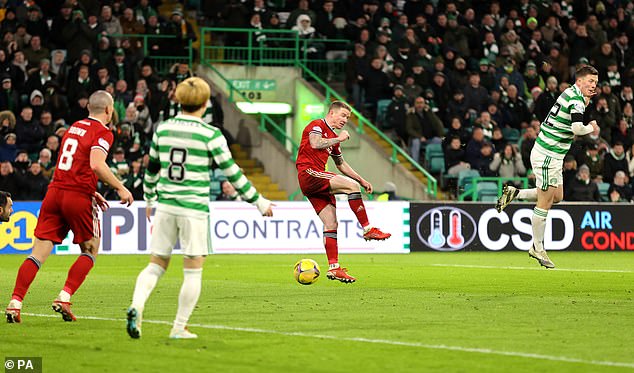 When Jonny Hayes tried to complete the clearance, the ball cannoned off McGregor and in