Michael Vaughan has broken his silence as the former England captain apologised to Azeem Rafiq in the wake of his involvement in cricket’s racism crisis.

Vaughan, 47, was accused by former Yorkshire star Rafeeq and two other Asian team-mates of saying ‘too many of you lot, we need to do something about it’ ahead of a cricket match for the county in 2009.

The former cricketer has been stood down by the BBC from their Ashes coverage this winter for ‘editorial reasons’, while several of his sponsors have distanced themselves.

And in his first interview since the scandal broke, Vaughan told the BBC that he had ‘no recollection’ of the incident in question, before apologising to Rafiq for the hurt he has felt.

‘It was my last few games and I remember it clearly that I was proud as punch that we had four Asian players representing Yorkshire cricket club.

‘That hurts, because I’ve always felt that every single team that I have been involved in, the biggest praise I ever got as England captain for six years was that I was the kind of person that really galvanized the group, got the team working together as one. I wanted everyone in the dressing room to feel included. 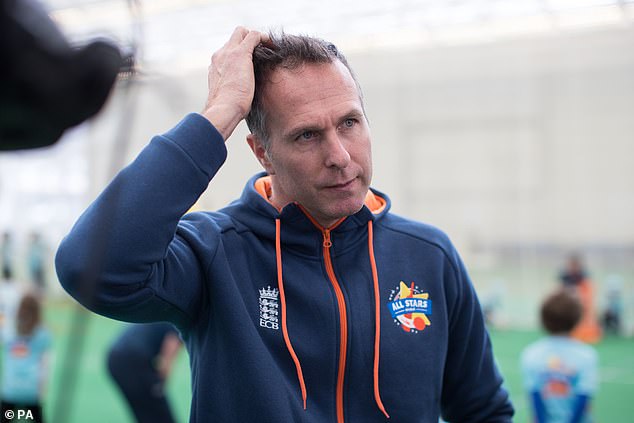 ‘Time can never be a healer but hopefully time can be a way of Yorkshire Cricket Club never going through this situation again  and not putting themselves in a position of denial that they treated the players so badly.

‘I look back at my 12 years in social media, I regret many tweets. I apologise deeply to anyone I offended with those tweets.

‘I won’t be doing the Ashes, I understand the story is all about Azeem Rafiq and racism in cricket I just hope in time I will have that chance to come back. The one thing I have loved more than anything since retiring is talking cricket, and I hope I can do that again.’