By Colin Brinsden, Aap Economics And Business Correspondent In Canberra

In a clear sign the economic recovery from the COVID-19 lockdowns is underway, economists expect retailers enjoyed another buoyant sales month during October as the restrictions eased.

They predict Friday’s retail trade figures from the Australian Bureau of Statistics will show spending rose by a solid two per cent in October, building on the 1.3 per cent increase in September.

The rebound in the month of September came too late to prevent sales over the September quarter slumping by a record 4.4 per cent as a result of lockdowns in NSW, Victoria and the ACT. 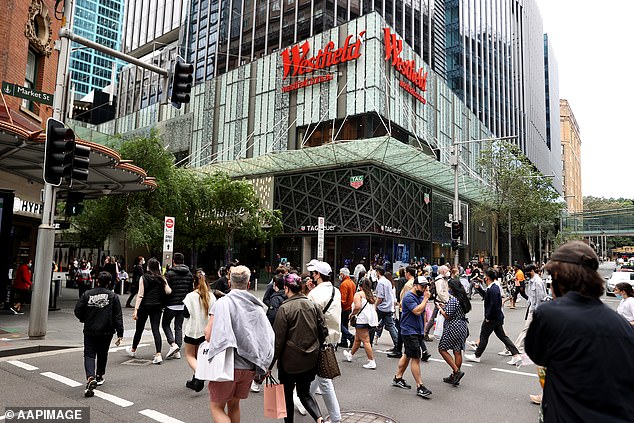 There are clear signs the Australian economy is rebounding after lockdowns saw spending nosedive, with the Black Friday sales providing a timely – and very large – boost (pictured, shoppers at Sydney’s Pitt Street Mall)

Such weakness will be reflected in next Wednesday’s national accounts for the September quarter, which are forecast to show an economic contraction.

Looking ahead, this weekend’s Black Friday-Cyber Monday discount sales are expected to generate huge interest, with one retail bank predicting almost a million dollars a minute will be spent.

Retailing groups are forecasting a $5 billion-plus spend-up over the weekend.

“With the rapid expansion of online sales over the past two years of lockdowns, Black Friday has become the ‘New Christmas’,” KPMG’s James Stewart says.

However, KPMG warns consumers are set to face higher prices for goods, with a survey finding 70 per cent of businesses in the retail and hospitality sectors reporting that supply chain issues will increase their costs. 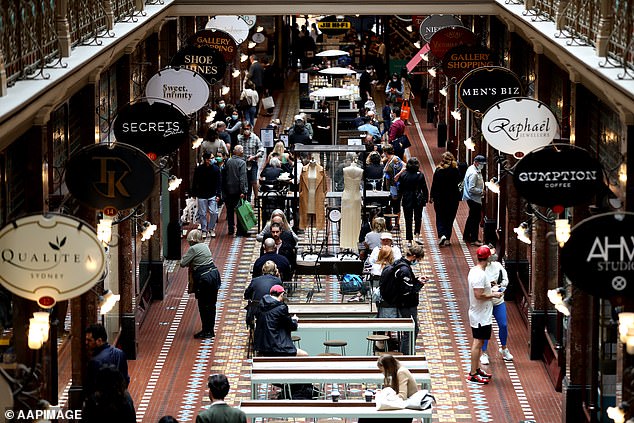 Despite the rebound in retail, the national accounts due on December 1 are expected to make for depressing reading as they show the economy has shrunk in the September quarter (pictured, shoppers at Sydney’s Strand Arcade)

Over three quarters of the 90 mostly private businesses surveyed also found that with retail and hospitality now opening up, there are concerns about a lack of staff would affect their operations.

Even so, four out of five businesses expect their performances to hit pre-COVID levels over the next 12 month.

“Supply chain issues are clearly a major hurdle to overcome for retailers, especially their impact on inventory volume and availability in the run-up to Christmas,” Mr Stewart said.

“Higher labour and freight costs are placing pressure on margins and these costs may ultimately be passed on to the consumer through higher prices by impacted retailers.”