Wigan Athletic forward Charlie Wyke has been hospitalised after he collapsed during training.

Wyke, 28, collapsed during a session as the League One team prepared to face Cambridge United, who they drew 2-2 with on Tuesday night.

In a statement Wigan confirmed medical staff immediately attended to Wyke after he collapsed and he has since been transferred to hospital where he remains in a stable condition.

Wyke has been in conversation with his family, hospital staff and is club staff members but he will not be in contention to play in the immediate future. 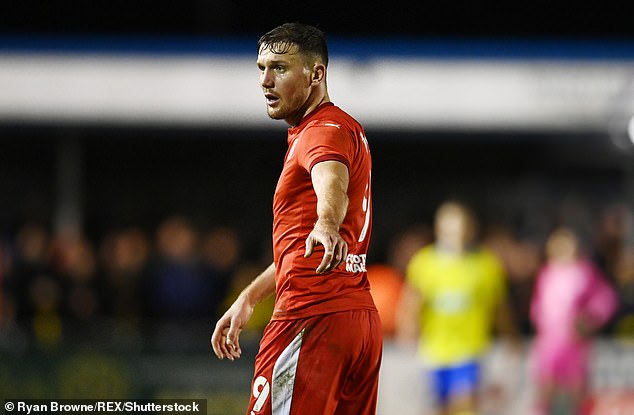 Wigan forward Charlie Wyke (pictured against Solihull Moors on November 16) is in hospital after he collapsed in training. The club have confirmed he is now in a stable condition

In a statement Wigan Chief Executive, Mal Brannigan, said: ‘First and foremost, the absolute priority for everyone associated with Wigan Athletic is Charlie’s health and wellbeing and providing support to him and his family.

‘As a Club, we would like to place on record our sincere appreciation to all of the staff within the NHS who, within what we know are challenging times, were excellent in their response and subsequent care for Charlie, working together with our medical team.

‘Clearly this news will cause alarm, though we would politely request that the privacy of Charlie and his family is respected. At the appropriate time, we will look to provide further updates to our supporters.’

Wyke played no part in Tuesday’s 2-2 draw with Cambridge United as Wigan cited illness for his absence.

The former Sunderland striker’s last appearance for Wigan came in the FA Cup on November 16 against non-league side Solihull Moors.