More than 2,500 people will die from lung cancer because of No10’s advice to stay home if you have a cough during Covid pandemic, charity warns

By Eleanor Hayward Health Correspondent For The Daily Mail

Thousands of lives will be lost to lung cancer because of Government advice to stay at home with a cough during the pandemic, a study has found.

The UK Lung Cancer Coalition (UKLCC) said Covid has sent decades of improvements in survival rates into reverse due to delays in diagnosis.

Urgent referrals from GPs for lung cancer fell by one third during the first year of the pandemic, meaning thousands of patients are missing out on lifesaving treatment.

Lung cancer patients were disproportionately affected by the pandemic because a key symptom is coughing — and Government advice said people with a cough must self-isolate. 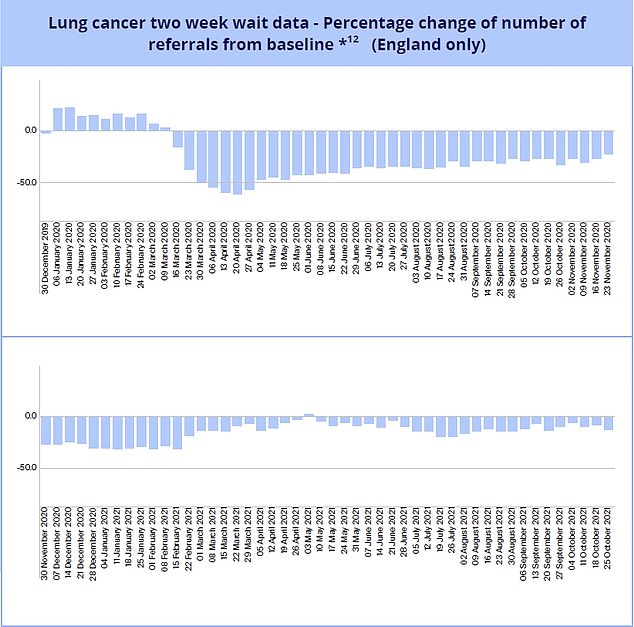 Thousands of lives will be lost to lung cancer because of Government advice to stay at home with a cough during the pandemic, a study has found. Graph shows: The percentage change in number of lung cancer referrals from GPs over time 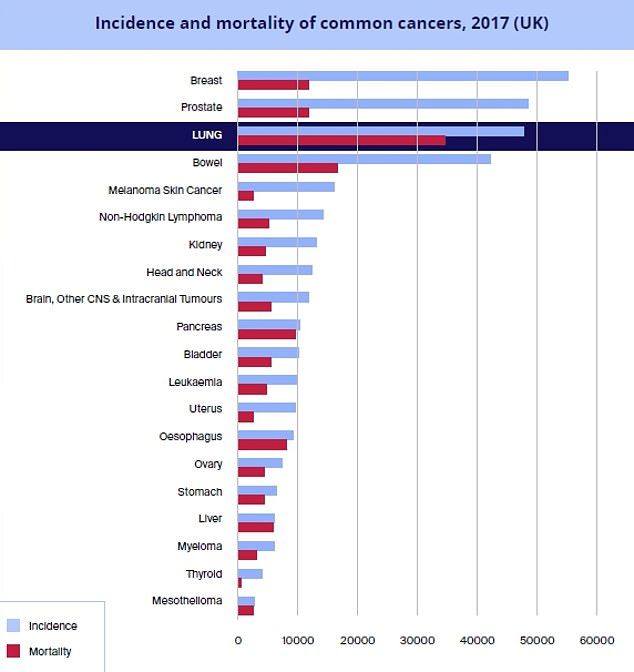 Graph shows: The number of people with (light blue) and dying with (red) different types of cancer in the UK in 2017

A cancer minister should be appointed to increase survival rates, a top doctor has said.

Professor Pat Price, a cancer consultant and chair at Action Radiotherapy, said no one is responsible for bringing up survival rates.

Half of people diagnosed with cancer in England and Wales survive for 10 years or more, according to CRUK, and survival has more than double in the last 40 years.

Professor Price referenced the successful rollout of Covid vaccines in England after a minister was appointed, who was able to avoid bureaucracy and ‘get on with it’.

Speaking to MPs on the Health and Social Care Committee for the inquiry into cancer services, she said: ‘If we did it like the vaccines – a minister, get the bureaucracy out the way, get on with it, do it now, whatever it needs to take [and] we did it.

‘Its nobody’s job, that’s the problem and we have to have the endpoint that is cancer survival – not saving money or working within a budget.

‘So until we have that radical rethink we are just going round in circles.’

The coalition estimate the delays will lead to a five per cent drop in survival rates, leading to more than 2,500 extra deaths each year.

Lung cancer is already the deadliest cancer in the UK, killing around 35,000 each year in the year.

If lung cancer is diagnosed early when it is more treatable, 57 per cent will survive — compared to just three per cent of people diagnosed at the latest stage.

The UKLCC estimates that the cancer backlog means the overall proportion of people surviving will plummet from 17.6 per cent before the pandemic to around 12.3 per cent now.

Professor Robert Rintoul, chair of the UKLCC’s clinical advisory group, said: ‘Prior to the pandemic, real progress was being made in raising five-year survival rates.

‘But Covid has had a devastating impact on early diagnosis of lung cancer and has compromised our target of driving up five-year UK survival to 25 per cent by 2025.

‘Lung cancer patients have been disproportionately affected by the pandemic.

‘Government guidance to stay at home with a cough, reluctance to engage with healthcare services during lockdown, and pressures on already over-burdened health services have inevitably resulted in a fall in referrals and increase in late-stage presentations of the disease.

‘We need to take urgent action to get back on track.’

The UKLCC’s report has for a national screening programme across the UK as well as twice-yearly national and regional public awareness campaigns linked to a dedicated lung cancer helpline.

NHS figures show cancer referrals plummeted during the pandemic, while waiting times for treatment are at their worst on record.

Charities have warned the pandemic will lead to the ‘the worst cancer crisis in a generation’ and cause thousands of avoidable deaths.