Critics are condemning JP Morgan boss Jamie Dimon for apologizing to China over a joke he made about the country’s communist regime, charging that the billionaire businessman is allowing China to censor Americans.

Speaking at Boston College on Tuesday, Dimon quipped: ‘I was just in Hong Kong and I made a joke that the Communist Party is celebrating its hundredth year. So is JP Morgan. I’d make a bet we last longer.’

‘I can’t say that in China. They probably are listening anyway,’ the 65-year-old banker added.

But in a sign that even the King of Wall Street is wary of Beijing, he has since apologized – twice.

His public expressions of remorse were concerning to some, including essayist Nassim Nicholas Taleb.

‘Apologies driven by fear (or economic interest) are not apologies, but genuine expressions of submission,’ Taleb tweeted. 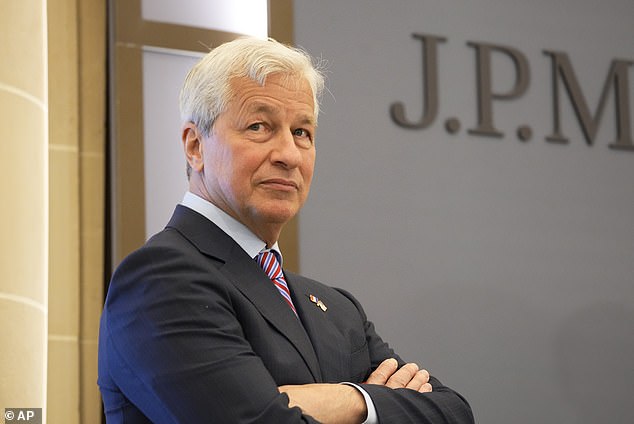 Speech: JP Morgan boss Jamie Dimon (pictured in Paris in June) has apologized twice for the remarks he made about China at the Boston College Chief Executives Club

The millionaire former option trader later added: ‘Nice to wake up to find out that I am freer, less dependent, and though not as rich, have much, much more solid f*** you money than Jamie Dimon. Slavery does not decrease with wealth.’

Journalist Matthew Yglesias also shared concern about the optics of the apologies.

‘The extent to which US-China economic integration is exporting Chinese speech norms to America is a big problem that nobody is working on,’ Yglesias tweeted.

Added another Twitter user: ‘W.O.W. Jamie Dimon NEVER walks back his comments…China has much more power and control over the US than anyone could ever have imagined!’

Some thought leaders expressed their dismay over the apology on Twitter, with essayist Nassim Nicholas Taleb saying: ‘Apologies driven by fear (or economic interest) are not apologies, but genuine expressions of submission

During his first apology, Dimon said: ‘I regret and should not have made that comment. I was trying to emphasize the strength and longevity of our company.’

Hours later, he added: ‘I truly regret my recent comment because it’s never right to joke about or denigrate any group of people, whether it’s a country, its leadership, or any part of a society and culture.

‘Speaking in that way can take away from constructive and thoughtful dialogue in society, which is needed now more than ever.’ 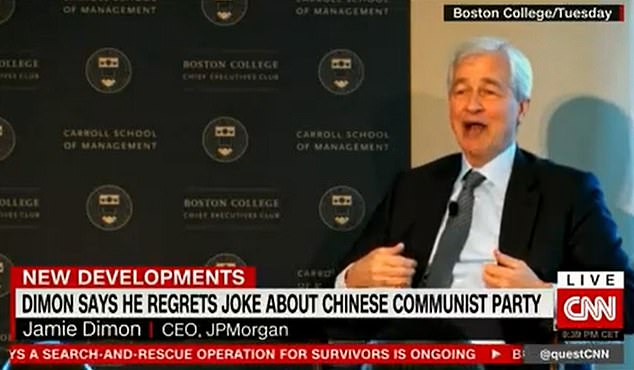 Speaking at Boston College on Tuesday (pictured), Dimon quipped: ‘I was just in Hong Kong and I made a joke that the Communist Party is celebrating its hundredth year. So is JP Morgan. I’d make a bet we last longer’

‘Companies, in particular, are realizing more and more that they can’t ignore political risks of doing business in China, and will have to answer to shareholders and other constituencies at home,’ Lowy Institute public opinion and foreign policy program director  Natasha Kassam told the outlet.

‘As views towards China sour, we can see increased expectations that governments and companies will be more forthright on China’s many human rights issues.’ 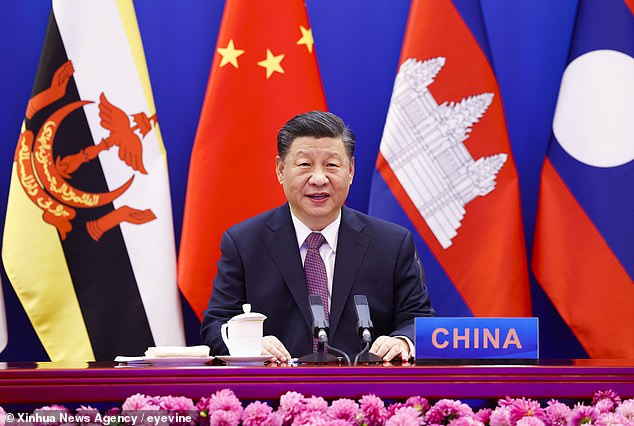 Dimon’s comments had risked jeopardizing JPMorgan’s growth ambitions in China where it won regulatory approval in August to become the first full foreign owner of a securities brokerage in the country. (pictured: Chinese President Xi Jinping in Beijing)

‘I noted the reports about how the individual involved has sincerely reflected. I think this is the right attitude. I hope the media involved will stop hyping this issue,’ foreign ministry spokesman Zhao Lijian told a regular daily briefing in response to a question.

The Dimon remark has been a hot topic in Hong Kong’s financial circles with bankers surprised the JPMorgan boss would make the comments given the sensitivities of dealing with China.

His comments had risked jeopardizing JPMorgan’s growth ambitions in China where it won regulatory approval in August to become the first full foreign owner of a securities brokerage in the country.

China experts in the United States, however, said that Dimon’s quick apology should ensure no serious damage was done to the bank’s long-term ambitions.

China expert Robert Lawrence Kuhn told CNN: ‘[Dimon] was afraid of the reaction in China, he’s seen precedent in the past.

‘This sounds like a trivial matter and one we can all smile at but it is deeply probative of at least three points: one is the common assumption that the Chinese people do not like the Communist Party-led government which is not true the large majority support the party granted they recognize the problems.

‘But they’ve seen a 50-fold increase of GDP per capita, 800 plus million people brought out of poverty, more high speed rail than the rest of the world put together, China respected. So they are very pleased with the government even though there are problems.

‘Secondly, China does need to relax in response to every perceived or even real criticisms. It only makes things worse. China needs to do that. 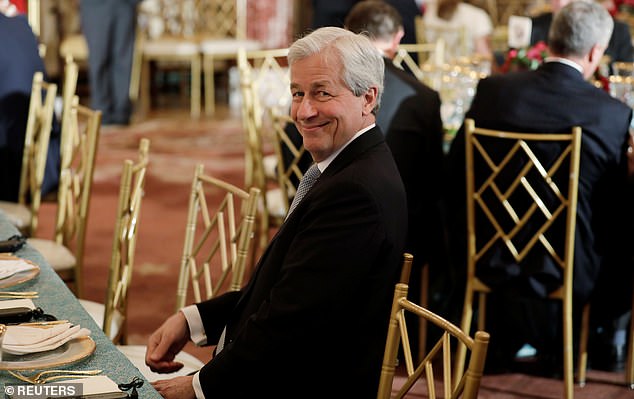 Beijing’s approval for JPMorgan to take full ownership of its securities business was a milestone in the opening up of China’s capital markets after years of gradual moves and pressure from Washington.

‘Dimon’s apology shows the degree of deference foreign businesses have to show to the Chinese government in order to remain in its good graces and maintain access to the country’s markets,’ said Eswar Prasad, a professor at Cornell University.

‘I don’t think this will have any longer term consequences,’ said Leland Miller, chief executive at data firm China Beige Book and an expert on China’s financial system.

The editor of the nationalistic tabloid Global Times, also China’s most out-spoken journalist, Hu Xijin, said on Twitter: ‘Think long-term! And I bet the CPC will outlast the USA.’

Asked by Bloomberg about Dimon’s comments at a news conference on Wednesday, Chinese foreign ministry spokesman Zhao Lijian replied: ‘Why the publicity stunt with some grandstanding remarks?’

Global executives typically choose their words carefully when discussing China, where foreign companies have occasionally been subject to backlash for perceived offences.

Swiss bank UBS ran into trouble in 2019, after a remark by one of its senior economists about food inflation and swine fever was interpreted as a racist slur. He was suspended for three months and UBS lost a plum role on a bond deal for a state-backed client.

Earlier this year, Swedish fashion giant H&M’s and U.S.-based Nike Inc faced a backlash from Chinese state media and ecommerce platforms after expressing concern about allegations forced labour had been used to produce cotton in Xinjiang.

‘The Chinese government has amply demonstrated its willingness to curb or in some cases shut down foreign businesses’ operations in the country if they challenge the government openly or even engage in perceived or indirect slights,’ said Cornell’s Prasad.

A week ago Dimon was granted an exemption by the Hong Kong government to visit the Chinese-controlled financial hub without needing to quarantine.

Visitors to the city from most countries must stay in hotel quarantine for two to three weeks at their own cost.

He was in Hong Kong for 32 hours after arriving by private jet. 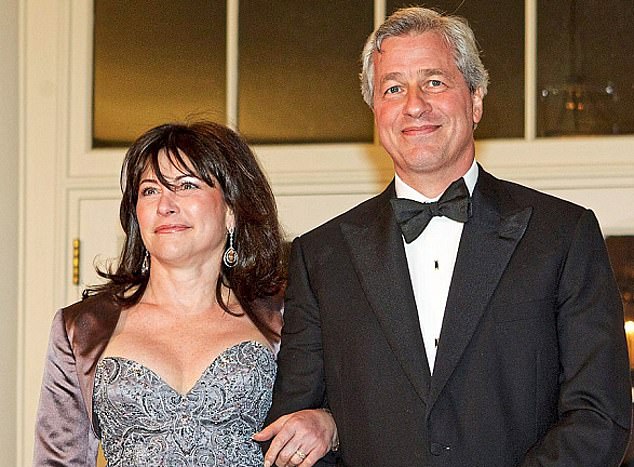 Dimon with wife Judy, who was described by classmate Jeffrey Immelt – who later became the chairman of GE – as ‘by far the best-looking, sexiest and smartest girl in the class’

Dimon has been – until now at least – seen as almost untouchable.

He has lasted 16 years as chief executive of the bank, surviving the financial crisis and making JP Morgan the most consistent performer on Wall Street.

His pop at China betrays a self-confidence – indeed arrogance – that is in stark contrast to British rival HSBC which has been accused of ‘kowtowing’ to Beijing.

And there is little sign he is ready to stand down. Despite being 65, it is understood he wants to stay for another five years, telling Fox Business over the summer: ‘I’m not going to go play golf and smell flowers.’

He has survived throat cancer and underwent emergency heart surgery at the start of the pandemic.

And he has outlasted other titans who led their banks into the financial crisis including Goldman Sachs supremo Lloyd Blankfein.

Dimon’s success has been put down to his huge energy and while he has a good sense of humour, this can quickly turn into a fierce temper.

He wakes up at 5am and is fully briefed and in the office by 7:30am, although he has supposedly cut back on running and tennis.

He appears at events alongside his wife Judy, who he wooed at Harvard and was described by classmate Jeffrey Immelt – who later became the chairman of GE – as ‘by far the best-looking, sexiest and smartest girl in the class’.

It is said he remembers the names of every junior he meets but also has a list of who owes him favors. And he has never been afraid to speak out and has even been willing to clash publicly with heads of states.

In 2011 he asked French president Nicolas Sarkozy to get the G20 to avoid ‘overregulation’ of banks. 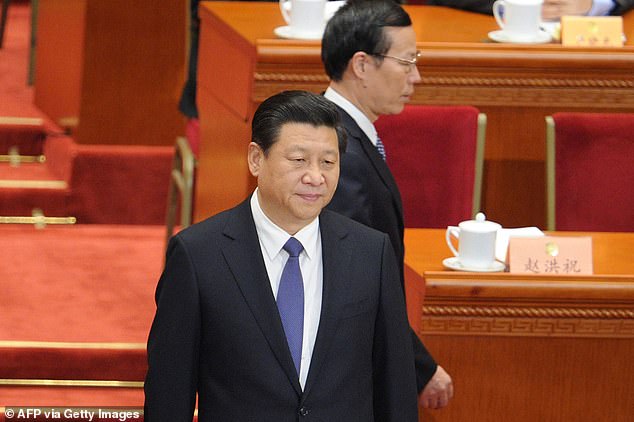 But Sarkozy saw red and launched into an attack on bankers, saying during the financial crisis they had made moves that ‘defied common sense’ and harmed millions of people.

Unsurprisingly, Dimon’s time at JP Morgan has made him a very rich man. Last year he took home £24million, matching his pay in 2019.

But a significant blot on his copybook was the London Whale scandal of 2012, which resulted in one of JP Morgan’s Canary Wharf bankers losing a whopping £4.2billion.

Dimon initially dismissed the story as a ‘tempest in a teapot’, which he quickly came to regret.

Later he was more contrite, calling the trades ‘flawed, complex, poorly reviewed, poorly executed and poorly monitored’. The bank ultimately paid more than £1bn in fines to settle US and UK regulatory probes into the matter.

For a while, Dimon’s rock star status was under threat as regulators questioned whether banks were unable to control their employees post the financial crisis and if bankers were still addicted to risk.

But if rivals thought it was the end of Dimon, they were wrong.

He knows how to retain power and has pushed out or sidelined potential successors, including Bill Winters, who went on to run Standard Chartered, and Jes Staley who went to Barclays.

Nevertheless, question marks have grown over whether Dimon can really last another five years.

There have been rumblings that British banker Marianne Lake, a Reading University graduate and a single mother of three, is getting closer to taking the title.

Should Lake pull it off, she would become the second major British chief executive on Wall Street with Scottish-born Jane Fraser heading up Citigroup. But for now, just like the Chinese Communist Party, Dimon looks immovable.