The COVID vaccine mandate President Joe Biden put in place for federal workers has not resulted in any apparent disruption to law enforcement, intelligence-gathering or holiday travel, the White House says.

The administration released any agency by agency breakdown of compliance with the order – employees had to show proof of vaccination by Nov. 22 or show their exemption.

Of the 3.5 million federal employees, 96.5% have complied with the mandate, meaning they are vaccinated or had their exemption approved with 92% having received at least one COVID vaccination dose.

About 4.5% – more than 157,000 people – sought exemptions or were already exempt and about 3.5% haven’t shown a record of vaccination nor sought an exemption.

The highest number of partial vaccinations was at the Agency for International Development, which had 97.8%, followed closely by the Department of Health and Human Services at 96.4% and State Department at 96.1%, according to data released by the Office of Management and Budget.

The agency with the least number of partially vaccinated employees was the Agriculture Department at 86.1%. 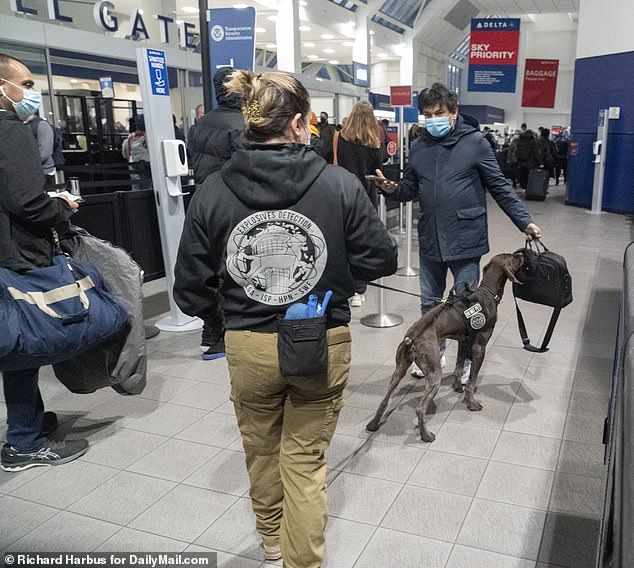 The COVID vaccine mandate President Joe Biden put in place for federal workers has not resulted in any apparent disruption to law enforcement, intelligence-gathering or holiday travel, according to the White House – above a bomb sniffing dog checkes a passenger at LaGuardia airport

For those who do not comply with the mandate or show proof of their exemption, there will be an education process and additional steps ‘if needed.’

‘Agencies are beginning an education and counseling process, followed by additional enforcement steps over time if needed,’ a senior administration official told DailyMail.com on Monday.

The federal vaccination rate outpaces the rate of vaccination for all Americans. About 82.2% of American adults, or more than 212 million people, have received at least one dose. Of them about 71%, or over 183 million, are fully vaccinated.

Ahead of the busy travel expected for Thanksgiving, the Transportation Security Administration said there would be no interruptions in service at airports.

Biden is using the federal government as a testing scenario as his administration pushes for companies to require vaccines for employees.

The White House argued the successful use of the mandate for the federal government sends a ‘clear message’ that businesses should move forward with Biden’s call for large companies to require vaccines for their employees.

‘96.5% of USG employees are compliant with the President’s vaccine requirement. With no disruptions. This sends the clear message to businesses to move forward with similar measures that will protect their workforce, customers, and communities,’ White House assistant press secretary Kevin Munoz wrote on Twitter Wednesday morning.

The president and his officials argue vaccination is the surest way to end the pandemic.

The president’s mandate for companies with more than 1,800 employees require vaccinations or regular testing is in limbo after a federal court blocked the measure. 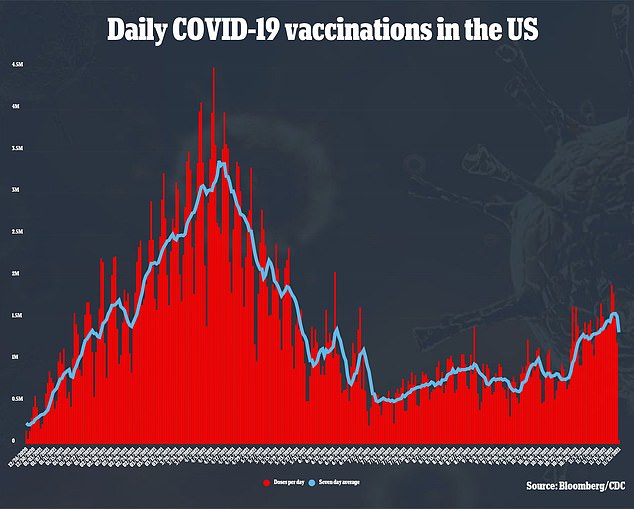 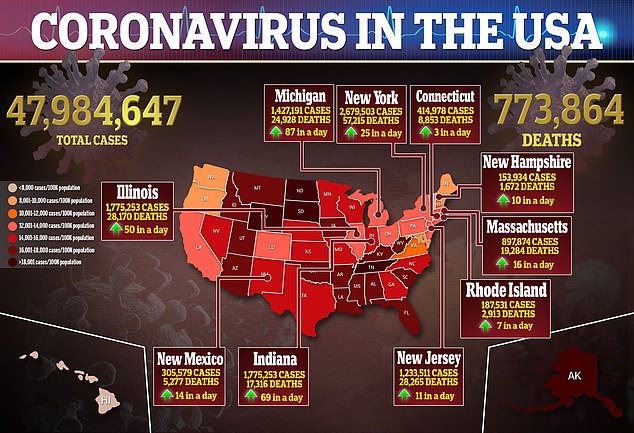 The Occupational Safety and Health Administration (OSHA) announced last week it was ceasing all enforcement of the measure of the emergency order, which ordered companies with 100 or more employees to require vaccines or weekly Covid-19 testing, or face a maximum of $136,532 in fines, $13,653 per violation.

‘While OSHA remains confident in its authority to protect workers in emergencies, OSHA has suspended activities related to the implementation and enforcement of the ETS pending future developments in the litigation,’ the OSHA website said.

The Department of Justice appealed, asking the cour to immediately lift the order, warning that delaying implementation of the policy would cost lives and lead to increased hospitalizations.

DoJ argued the threat to workers is ongoing and overwhelming’ as offices reopen and the highly transmissible DELTA variant remains a threat.

‘Simply put, delaying the Standard would likely cost many lives per day, in addition to large numbers of hospitalizations, other serious health effects, and tremendous expenses. That is a confluence of harms of the highest order,’ the Justice Department said.

The U.S. is reporting about 95,000 new infections daily on average, an increase of 14% compared to the week prior, according to data from Johns Hopkins University.

Earlier, the 5th Circuit Court of Appeals in New Orleans upheld a stay on a ruling ordering OSHA to ‘take no steps to implement or enforce’ the emergency order ‘until further court order.’

Circuit Court Judge Kurt Engelhardt wrote in the prevailing opinion that the mandate goes too far, and that he has ‘grave’ concerns about whether the edict is legal or constitutional.

‘The mandate is staggeringly overbroad,’ the opinion said. ‘The mandate is a one-size-fits-all sledgehammer that makes hardly any attempt to account for differences in workplaces (and workers).’

Meanwhile, the Department of Justice (DOJ) promised to ‘vigorously defend’ Biden’s vaccine mandate after it was held up by federal court.

At least 27 states have filed legal challenges in at least six federal appeals courts after OSHA released its rules on November 4.

The Labor Department announced earlier that a record 4.4 million people quit their jobs in September, or about 3 per cent of the nation’s workforce.

Psaki downplayed a question from DailyMail.com as to whether that number might increase if workers quit rather than get their COVID vaccine – a federal mandate that will go in place in January if the court order is lifted.

She argued that many companies that have already implemented a mandatory vaccine policy – such as McDonald’s, GE, Google, and United Airlines – haven’t seen workers leave their jobs.

‘That hasn’t been what we’ve seen in the vast majority of companies who have implemented vaccine mandates and as you know, that deadline hasn’t come up for where it would be required,’ she noted.

She also argued people will ‘feel safer going to their workplace’ once the vaccine mandate is in place.

‘They will also know that workers are less likely to get sick from COVID, which has been, you know, in a range of industries, an enormous issue and created a great deal of unpredictability across the board,’ she said.