The Minnesota Vikings sent team representatives and mental health professionals to the home of defensive lineman Everson Griffen Wednesday morning after the 33-year-old posted disturbing video footage of himself on Instagram clutching a handgun and claiming people wanted to shoot him.

‘Vikings representatives and the team’s mental health professionals have been on-site at Everson Griffen’s home since early this morning and are cooperating with law enforcement,’ the team said in a statement. ‘Our only concern at this time is the safety and well-being of Everson and his family. We will have further comment at the appropriate time.’

The 6-foot-3, 273-pound defensive end, has three sons with his wife, Tiffany. Griffen has previously battled mental health issues and apologized in 2018 for a ‘nervous breakdown’ in which he allegedly threatened to shoot hotel staff and jump out of an moving ambulance. 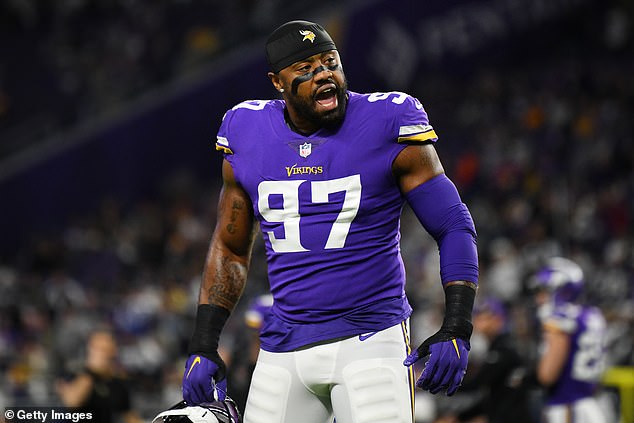 ‘Yo, yo, yo,’ Griffen says while holding a handgun at the beginning of the 30-second clip, which he posted Tuesday night. ‘I’m in my house. N****** trying to pop me. I still got clips left.

‘This is my gun, .45 Wilson combat, registered to me,’ he said. ‘I bought all my bullets around town.’

Griffen added that Vikings running back Dalvin Cook ‘helped me purchase this gun.’

‘It all belongs to me and they are registered to me, so I know exactly where I bought them. I got the card I have them on. I have everything.’

Cook has faced his own troubles, recently, after being sued for domestic violence by his now-former girlfriend. The woman’s lawsuit, obtained by DailyMail.com, includes photographs of injuries she claims she suffered during the altercation in November of 2020, when Cook allegedly gave her a concussion.

Cook has denied the accusations and claims he is the victim.

Tuesday’s incident was not the first for Griffen, a four-time Pro Bowl selection.

In 2018, he allegedly threatened to shoot staff at Hotel Ivy in downtown Minneapolis unless he was allowed back into his room, according to the incident report obtained by the Daily Mail. The name of the accused was redacted, but according to multiple reports, the man was Griffen.

He was not seen with a gun while making those threats, according to witnesses.

Later Griffen allegedly attempted to break into Vikings cornerback Trae Waynes’s home, but Waynes later denied that in a statement issued by the team.

Griffen ultimtely agreed to go to the hospital, but allegedly jumped out of the ambulance at one point and tried to flee, according to the police report. The reporting officer ultimately placed a health and welfare hold on Griffen ‘based upon his actions and information’ he’d been told by Vikings officials and Tiffany.

During that 2018 incident, Griffen’s wife Tiffany told police he suffers from mental struggles and had gone several days without sleeping, according to the Minneapolis Star-Tribune.

In his apology, Griffen thanked his family, his teammates, the Vikings organization and the fans for their support and apologized for his impending absence at upcoming games that season.

‘I apologize for not being able to take the field with my teammates and do not have an exact timeline for my return,’ he wrote. ‘I promise, however, I will return as a much-improved person and player.’