Three Georgia police officers have been placed on administrative leave after a cellphone recording has emerged online showing them apparently holding down a 13-year-old girl as she is being whipped with a belt by a woman.

Columbus Police Chief Freddie Blackmon confirmed on Tuesday that he ordered an internal investigation after learning of the video that has been circulating on social media.

Blackmon described the video as showing ‘a juvenile being whipped or punished… with a belt.’ 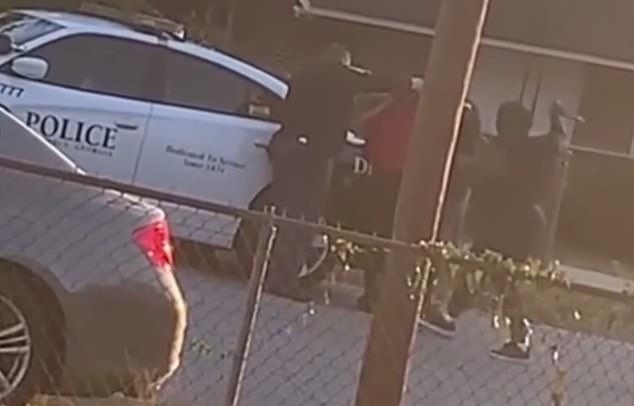 He said: ‘I was made aware of a video that was on social media, and that initiated my concerns.’

WTVM reported, citing a neighbor, that police were called on Saturday to a vacant home in Columbus -a city of 200,000 people near the Alabama border – after getting reports of five or six teenagers hanging out inside.

Responding officers were in the process of detaining the last teenager when a woman showed up on the scene and proceeded to angrily strike the 13-year-old with a belt.

In the video recorded by a bystander across the street, police appear to be holding the teen’s arms while the woman hits her several times.

None of the officers makes any apparent attempt to stop the woman from hitting the child, or shield her from the blows.

Police have not identified the woman doing the whipping, and a spokesperson with the department declined on Wednesday to comment on the nature of her relationship with the girl, citing the ongoing investigation by the Office of Professional Standards.

It is unclear whether the 13-year-old was charged with any offense, or simply released to her family after her arrest.

Chief Blackmon has requested that the Georgia Bureau of Investigation conduct a separate review to determine if any crimes have been committed.