Green Bay Packers star Aaron Rodgers’s refusal to get the COVID-19 vaccine not only left him exposed to the virus, which he contracted earlier this month, but it may have contributed to the quarterback’s recent toe problems as well.

Rodgers, who is 1-1 since being sidelined with coronavirus, is currently battling a foot problem, as he told SiriusXM host Pat McAfee on Tuesday.

‘No lingering effects, other than the Covid Toe,’ Rodgers said. 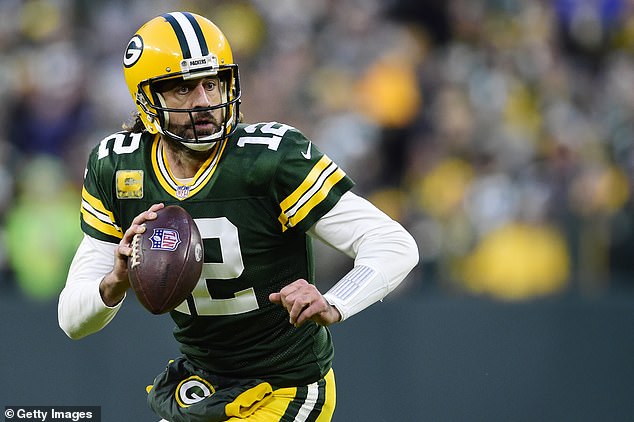 Packers QB Aaron Rodgers, who is 1-1 since being sidelined with coronavirus , is currently battling a foot problem known as ‘COVID toe,’ he told SiriusXM host Pat McAfee on Tuesday

It may sound like a pseudoscientific diagnosis, but the issue, known as pernio or chilblains, has been found ‘with increasing frequency in children and young adults during the COVID-19 pandemic,’ according to a recent study in the British Journal of Dermatology.

The condition can result in discoloration or lesions around the toes, and as Rodgers said after Sunday’s loss to the Minnesota Vikings, it is ‘very, very painful.’

The good news for Rodgers is that ‘COVID toe’ is a sign that his body’s immune system worked effectively against the virus, which has not yet been firmly established as the root cause of the pernio around the toes.

Researchers believe that COVID toes are caused by excess interferon, which is a protein the body uses to fight infection.

‘The way I would think about it is it’s basically a side effect of how your own immune system is fighting the virus,’ Esther Freeman, a doctor and principal investigator for the Covid-19 Dermatology Registry, told The Wall Street Journal. ‘It’s part of our body’s response to the response to the virus. It’s almost too much of a good thing.’

Typically the issues subside within one to four weeks of the COVID-19 infection, according to Freeman.

‘The best way to avoid Covid Toes is to get vaccinated,’ Freeman said.

Rodgers was clearly bothered by the issue on Sunday, and even went to the locker room before halftime to be examined by trainers and team doctors.

Cold weather, like the kind found in Green Bay this time of year, can be an exacerbating factor. Fortunately, Rodgers has only to play Sunday against the visiting Los Angeles Rams before the Packers go on their bye week, when the California native will be able to go to a warmer client and recuperate.

Controversy over Rodgers’s vaccination status erupted earlier this month when he tested positive for COVID-19 and was forced to enter a 10-day quarantine — the minimum amount of time an unvaccinated player is asked to quarantine, per NFL rules.

The revelation that he’s unvaccinated came as a surprise to many because Rodgers seemed to indicate in August that he had received the injection when he told reporters that he was ‘immunized.’ As it turned out, he never received the vaccine and was only referring to a doctor-prescribed treatment aimed at raising his antibody levels.

Rodgers has since apologized ‘to anybody who felt misled,’ but stopped short of admitting that he lied to reporters back in training camp.

Howard Stern continued his attacks on Rodgers this week for what the SiriusXM host characterized as his lie about being vaccinated.

‘This f******* Aaron Rodgers, he’s a scumbag because he lied,’ said Stern, who previously called for him to be banned from the league.

Stern, 67, is an outspoken advocate for the vaccine, but said Rodgers’s biggest transgression was giving those around him a false sense of security.

‘Forget about the fact that he didn’t take the vaccine, he lied to everybody,’ Stern continued. ‘He put people in danger. People have families. He’s a f***head and the NFL should be ashamed of themselves.’

Rodgers missed one game due to COVID-19, but has since recovered while receiving medical advice from podcaster and vaccine skeptic Joe Rogan. The reigning NFL Most Valuable Player is 1-1 in two games since his return while battling COVID toes.

Stern didn’t hesitate to seize on that injury to illustrate another point about Rodgers.

‘Now I hear he has a toe injury,’ said Stern, who is admittedly not a football fan. ‘Let me ask you something: When he had the toe injury, did he go to the doctor or did he go to Joe Rogan?

‘Who fixed his toe?’ Stern continued. ‘I bet you he went to a doctor. So he goes to doctors for everything else, but on the vaccine he’s listening to Joe Rogan. What the f*** is going on? We’ve got to put our faith in science.’

Rodgers has been the target of criticism since his COVID-19 diagnosis and the revelation that he never received the vaccine.

He shared his reasoning on the Pat McAfee Show on November 5, explaining that he’s allergic to an ingredient in the vaccine and also had concerns about potentially becoming a parent after getting the injection. Rodgers also blamed the confusion for his vaccination status on reporters for failing to ask any follow-up questions in August.

However, in another interview with McAfee on November 9, Rodgers admitted to misleading the public and apologized ‘to anybody who felt misled.’

Rodgers’s tone was much less defiant in his November 9 interview with McAfee.

‘Hate is not going to bring us out of this pandemic,’ Rodgers said. ‘It’s going to be connecting and love. And I’m not going to hate on anybody that’s said things about me. I believe everybody is entitled to their opinion and I always will believe that.’