What Americans are NOT thankful for: 77% of voters say inflation is affecting their lives this holiday and 57% blame Biden for the soaring prices, shocking poll shows

More than three-fourths of Americans are worried inflation will affect their winter, with 51 per cent concerned they ‘won’t be able to afford what they need during the holidays,’ a new poll reveals.

A Yahoo/YouGov survey taken the week before Thanksgiving shows 77 per cent of Americans feel inflation is affecting their lives – and 57 per cent blame it on President Joe Biden.

Among Democratic voters, 25 per cent say Biden is not doing enough to address inflation and another 39 per cent say they aren’t sure. This means that 64 per cent of the president’s own party don’t have much confidence in his response to the inflation crisis.

Inflation is hitting three-decade highs in the midst of a supply chain issue exacerbated by worker shortages. From October 2020 until now, prices overall in the U.S. have soared by 6.2 per cent.

Republicans say they feel the effects of inflation at a higher rate than Democrats. 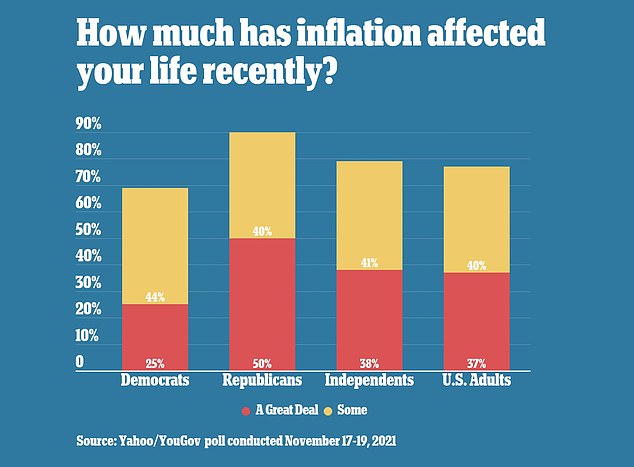 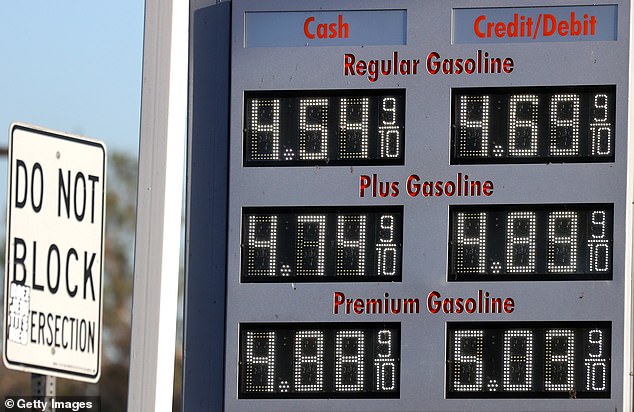 Prices at the pump have surged, reaching upwards of $4 and $5 in some ares of the country

The polls shows 90 per cent of Republican voters feel inflation has impacted their life ‘a great deal’ or ‘some’, while only 69 per cent of Democrats feel the same. Independent voters are in the middle at 79 per cent.

When respondents were asked what they felt was the biggest issue facing the nation, more Americans said inflation than anything else. Seventeen per cent said inflation was the top issue compared to the 15 per cent who said the COVID-19 pandemic.

Forty-five per cent of respondents said they are worried they ‘won’t be able to get what they need’ due to shortages related to massive delays in the supply chain stemming from bottlenecks at U.S. ports.

Of that sample, 80 per cent said supply chain disruptions could be blamed on the pandemic, while 57 blame the president. 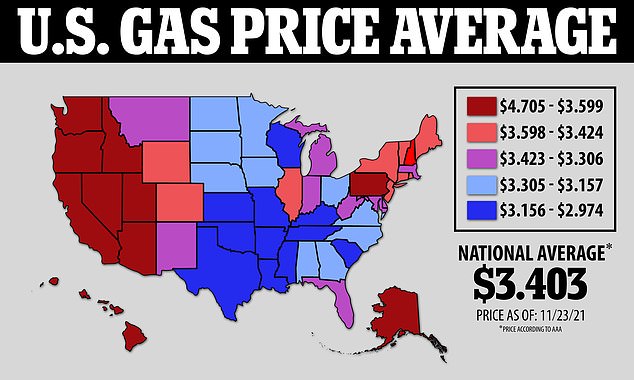 Prices for a gallon of gas are highest in west coast states and in the North East, according to AAA. They are lowest in south central states like Florida, Louisiana and Mississippi where prices range from $2.97 – $3.15

A new NPR/Marist poll put out Wednesday shows the president at 43 per cent approval as his slump continues. This was the lowest approval for Biden since the poll started tracking it when he took office.

In the Yahoo/YouGov poll, Biden’s approval rating on his handling of the economy was at just 40 per cent – lower than his overall approval.

One area prices are hitting particularly hard is at the pump, where prices of a gallon of gas have averaged $3.40 across the country, reaching much higher is some areas – like in California where it has surpassed $5.00 per gallon.

Biden announced on Tuesday to the ire of Republicans that he is releasing 50 million barrels of oil from the nation’s Strategic Petroleum Reserve to help lower gas prices in the short term.