An investigation is underway after a third southern white rhino died at a popular South Australian wildlife park.

The zoo is now launching an investigation after the deaths of two other rhino calves – Imani in 2019 and Tundu in 2017.

Keepers monitored the calf after she wasn’t displaying normal energy levels, but sadly, she passed away next to her mother Umqali on Friday night. #9News pic.twitter.com/kCBnsFn57T 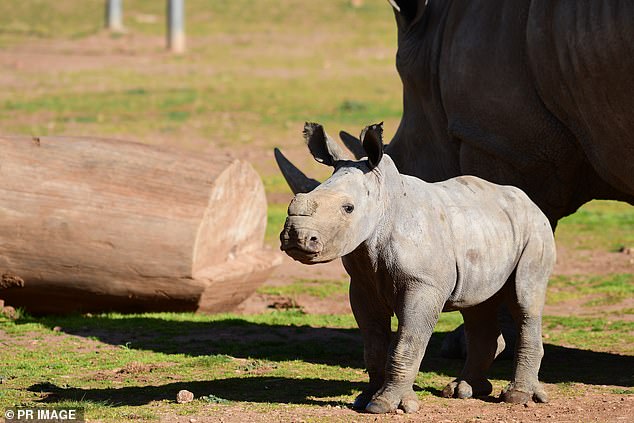 Both rhinos were of a similar age to Eshe and also died from internal bleeding.

Monarto Safari Park took to Facebook on Monday saying they were heartbroken over the passing of Eshe’s.

‘The 15-month old Southern White Rhino had been showing signs of discomfort over Thursday and Friday, and so vets were caring for her and mum Umqali in an off limit area,’ it wrote.

‘The mother of all these calves, Umquali, has shown all the best maternal attributes being both protective and caring in their upbringing.

‘Staff observations and previous camera footage have shown nothing negative in regard to interaction between mother and daughter or our other female rhinos.’

The park added it made a number of changes after the death of Imani and Tundu, but it couldn’t ignore the similarity between the rhinos’ deaths. 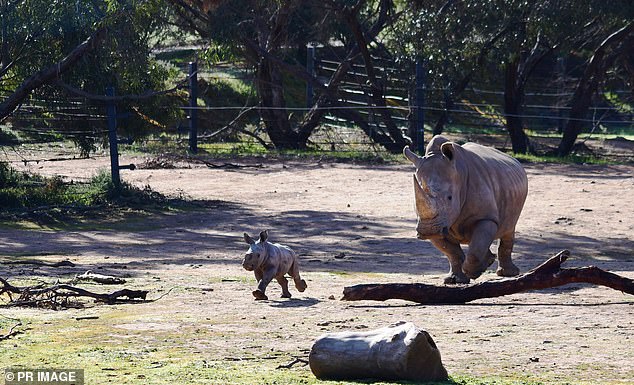 The park has announced an investigation after Ehshe died last week from internal bleeding after major trauma – experts believe a generic condition may be responsible (pictured, white rhinos in a Monarto Park enclosure)

‘The coincidental nature of these deaths is difficult to ignore so we will be carrying out more testing in regards to both Eshe’s death (from the post mortem) and with both parents as well,’ it said.

Experts suspect a genetic condition was responsible for the death after sharing the same mother.

There are less than 15,000 Southern White Rhinoceros left in the wild. New calf are extremely important to the region for population and breeding purposes.

The wide-mouthed mammal historically roamed freely across the continent but saw rapid population decline amid poaching and the destruction of its habitat.

An adult southern white rhino – which takes it name from the Afrikaans word ‘wyd’, or wide, in reference to its broad muzzle – can reach more than three tonnes.

They are listed as a ‘vulnerable’ species, with three of the five species – the Javan, Sumatran and Black Rhinoceros -are critically endangered.