A Michigan woman who was left with burns after a teenager Tim Hortons worker allegedly threw a hot cup of coffee in her face is now suing the restaurant chain.

Dusty Jackson, 41, filed a lawsuit against the Southgate Tim Hortons, Michigan, over the incident back on October 30, according to Fox 2 Detroit.

Jackson’s lawyer, Abdallah Moughni, told the outlet that had the coffee been ‘black’ and not cooled down by the addition of creamer, his client would have likely been ‘permanently disfigured.’

Very blurry surveillance footage appears to capture the moment that the teenage girl threw the hot beverage in the customer’s face after they argued about her order at the drive-thu.

Police body camera footage then catches up with Jackson after the attack where she and her car are seen dripping with coffee.

A criminal investigation is also underway.

The suspect in the case, who was not named, was fired after other employees who witnessed it told their manager what had happened.

Police said an investigation into the incident is still ongoing.

Jackson told responding officers that the employee refused her request to add Timbits, which are small donut holes, to her order, saying it was ‘kind of f**ed up’ and ‘stupid’ that the worker, who is only 16, would not complete the request.

That’s when she allegedly called the employee an expletive before the teen girl tossed the cup of coffee at Jackson as she sat in her car in the restaurants drive-thru.

While the coffee itself was reported to be warm and not piping hot, Jackson still suffered minor burns due to the incident, although she refused medical treatment.

SCROLL DOWN FOR VIDEO 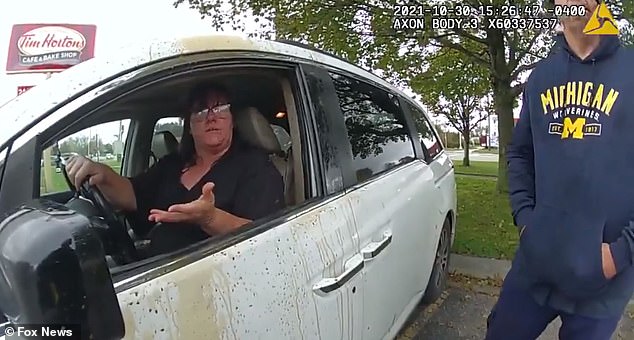 Dusty Jackson, 41, pictured in car, and her husband, right, speak to a police officer following the October 30 incident, when a Tim Hortons worker tossed coffee at Jackson’s face 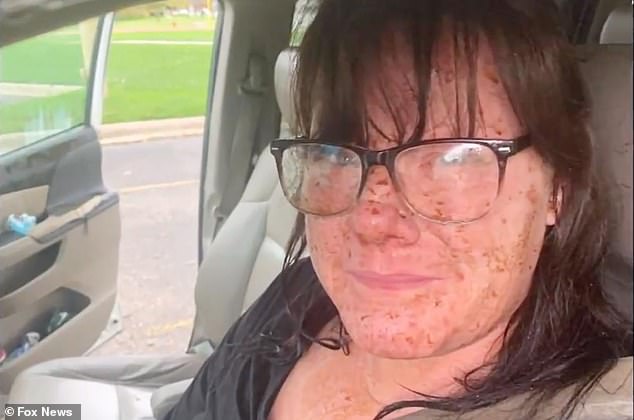 Pictured: Jackson’s face covered in coffee, which the 16-year-old worker threw at her after an argument escalated when the employee said she could not add donut holes to Jackson’s order

Pictured: the Tim Hortons location in Southgate, Michigan, where the coffee-throwing incident occurred

Meanwhile, the worker had told Jackson that it was not her fault that the Timbits could not be added to her order.

When the employee slammed the drive-thru window shut, Jackson turned to her husband as he sat in the passengers seat and said ‘what a (expletive).’

A fellow Tim Hortons employee told police that items can’t be added at the window when the restaurant is busy.

However, a different employee eventually added the Timbits to Jackson’s order after the incident. 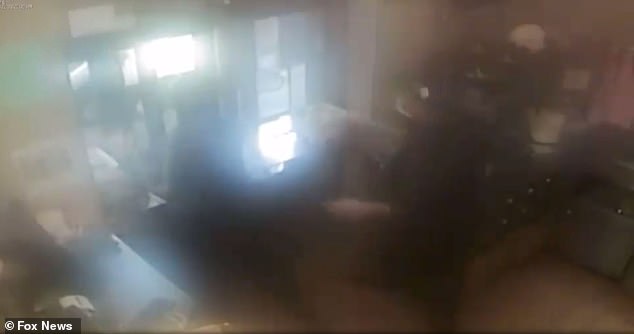 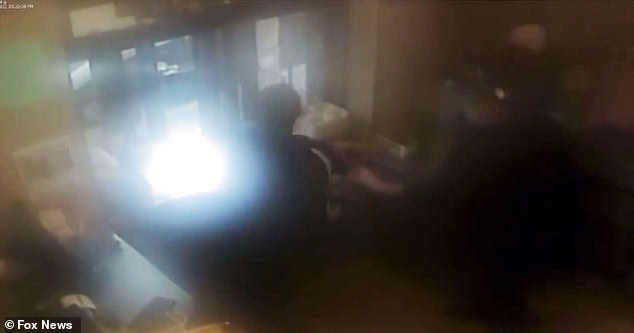 The female employee, pictured, was fired after the incident after witnesses and fellow employees told her manager what had happened 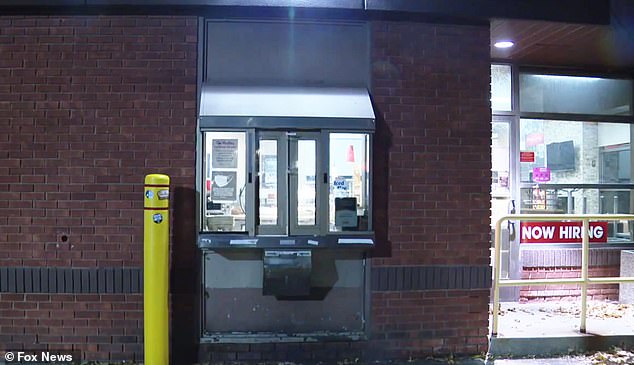 Pictured: the drive-thru section of the Tim Hortons in Southgate, Michigan

According to Moughni, a similar incident occurred back in 2015 at that very Tim Hortons location, while adding that the company should’ve beefed up their policies to prevent such incidents from occurring again.

‘The blame is not so much on the girl who threw the coffee, the blame should be shifted to the guys in charge,’ he said.

‘The Tim Hortons Corporation, which allows this franchise and hundreds of franchises to poorly train, supervise and employ their employees.’

One witness, another employee who worked at the Tim Hortons, described Jackson as ‘just nasty from the start.’

Senior manager of communications at Tim Hortons, Michael Oliveira, said that the company would not comment on open or pending lawsuits, according to Click On Detroit.

‘However, I can say that Tim Hortons franchisees are expected to meet our brand’s strict standards and high expectations for guest experience and that we are looking into the matter with the franchisee that operates the restaurant,’ Oliveira added.