Prospective Christmas presents that are still stuck on cargo ships likely won’t make it onto store shelves in time for the festive season, it has been claimed.

More than 100 ships remain stopped or anchored at the Port of Long Beach and Los Angeles after the governor of California announced measures to help goods move along.

But Axios reported Monday that if those ships’ cargo hasn’t already been unloaded, there’s slim chance of the goods inside making it into shops by December 24.

The cargo ships are stuck for a variety of reasons, including a labor shortage, a lack of equipment needed to transport the containers and overstuffed warehouses.

The pandemic exacerbated online shopping, contributing to logjams that are likely to be worsened by holiday buying. 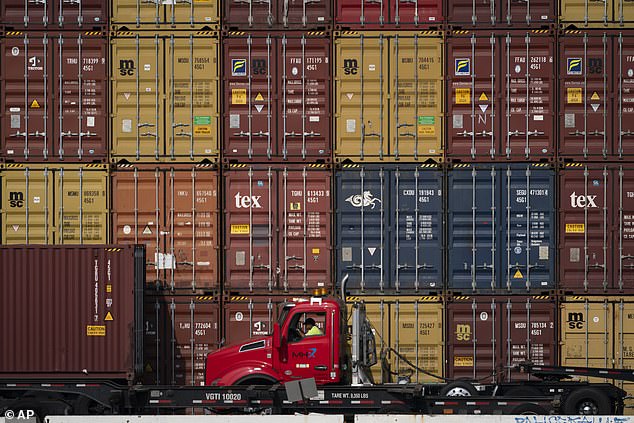 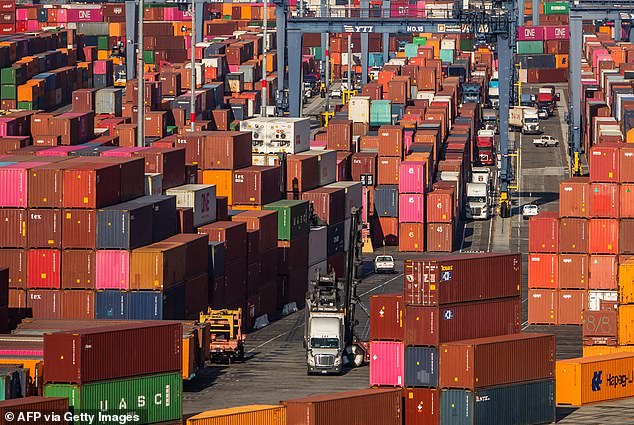 There were about 100 shipping vessels stopped or anchored at the Port of Long Beach in California on Monday. Above, the port last week on November 17 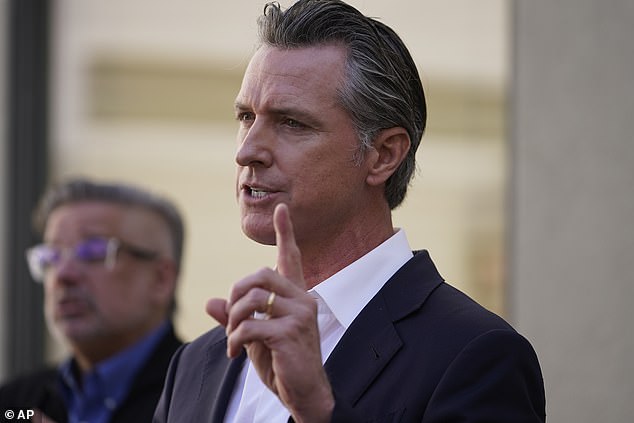 Gov. Gavin Newsom of California has introduced measures to help move containers along, including extended DMV hours to get more truck drivers licensed and on the road

There were 39 ships at anchor at Long Beach on November 19, according to the port.

But a Monday morning count of ships tracked by MarineTraffic.com shows 100 or more vessels as ‘stopped’ or ‘at anchor’ at the busy hub, responsible for 40 percent of US imports.

It is not clear which trucks are full and which are empty and waiting to be sent back to Asia or places of origin.

The Port of Long Beach did not immediately respond to questions from DailyMail.com.

The logistics of unloading the ships and getting their containers onto trucks headed for stores and warehouses means it is ‘highly unlikely’ that anything still stuck at a port will make it to a store by Christmas, according to Axios.

The logjam at the Los Angeles-area port was as long as 17 days earlier this month, double the wait time from September. The port website shows ships anchored for as long as 40 days.

The port and Gov. Gavin Newsom have announced measures to get the cargo moving and get ships off the coast. 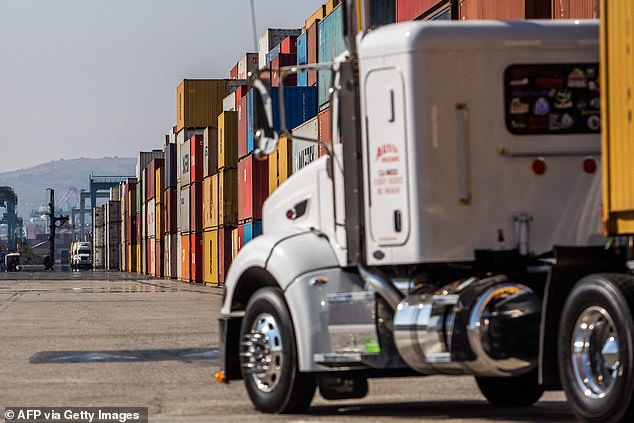 Contributing to the logjam is a lack of shipping workers and equipment like chasses, frameworks that are hooked onto the bottom of shipping containers to help them move

On October 25, the port announced it will begin charging ocean carriers a fee for each import container that ‘dwells’ at the port.

The hefty penalty, which goes into effect today, will charge $100 per container, increasing in $100 increments each day until the container leaves the terminal.

On November 15, the port said it had seen a 26 percent reduction in cargo on the docks since it announced the fees last month.

Gov. Newsom also announced he was doubling capacities at the state DMV in order to conduct more commercial driving tests for truck drivers earlier this month.

‘With today’s announcement, we’ll get more truckers on the road to get goods where they need to go faster,’ said Newsom in a statement on November 10.

‘The supply chain crisis is not a California specific problem, but we’ve taken swift action to relieve congestion and increase our capacity to move goods quickly.’ 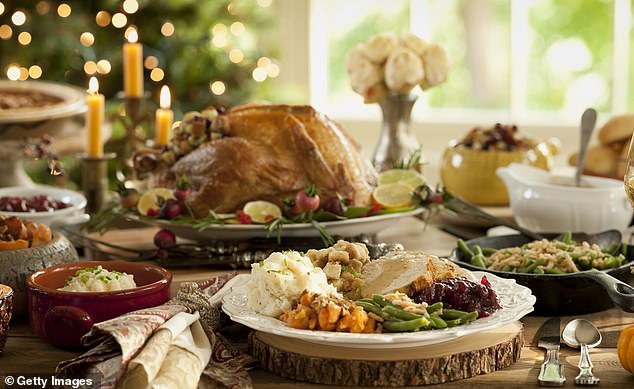 Americans are going to pay 14 percent more on their Thanksgiving feast this year, due to supply chain shortages and the lasting impacts of COVID-19 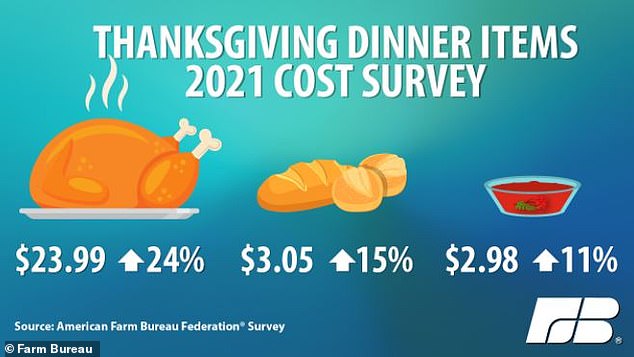 The American Farm Bureau’s annual survey revealed an increase in costs of turkey and side dishes, as indicated above 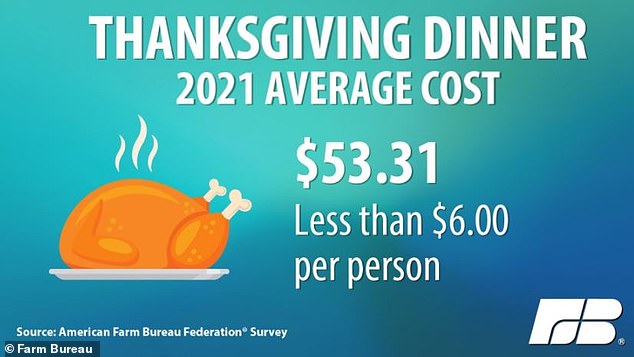 The governor has also thanked the Long Beach port for acting to curb the logjam and the Biden administration for passing the Build Back Better infrastructure act, which includes $17 billion for ports and waterways.

‘Thanks to the collective work of California and our partners, we have seen a 32% drop in containers sitting on the docks,’ said Gov. Newsom said at the port last week.

‘California has taken swift action across the board to address congestion and increase our capacity to move goods quickly. I am grateful for the cooperation of both the public and private sectors – from the federal government, to the ports, the workforce, the retailers, and the shipping lines – for the additional commitments they’ve made to tackle the backlog.’

The supply chain crisis, which is driving inflation up, may even be felt at the dinner table on Thanksgiving.

The American Farm Bureau Federation’s annual survey revealed that families are spending $53.31 on a holiday dinner for ten, an increase of 14 percent from last year’s $46.90.

The organization calculated the price using 218 surveys completed across all 50 states and Puerto Rico.

The Farm Bureau cited the pandemic and inflationary pressures on the economy as possible reasons behind the rising food costs. 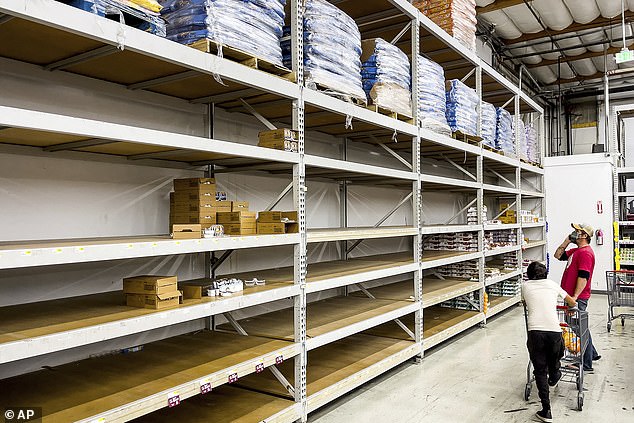 Stores across North America are feeling the supply chain backup. Above, empty shelves at a Pet Club store in Emeryville, California on Thursday

‘Several factors contributed to the increase in average cost of this year’s Thanksgiving dinner,’ said AFBF Senior Economist Veronica Nigh.

‘These include dramatic disruptions to the U.S. economy and supply chains over the last 20 months; inflationary pressure throughout the economy; difficulty in predicting demand during the COVID-19 pandemic and high global demand for food, particularly meat.’

Driving up the logjam at ports across the country is a labor shortage of truckers and terminal mechanics, full warehouses and an ‘antiquated’ system that requires trucks to pick up specific containers at specific times, Axios reports.

Some items are in demand because they’re being hogged by certain shipping companies out of fear that they’ll need them.

Among these items are chasses, load-bearing frameworks attached to the bottom of shipping containers so they can be hooked onto a truck and transported across the country, according to NPR’s Planet Money.

Other ports across the country are affected by the supply chain backlog.

There are 18 shops moored or anchored near New York and New Jersey, according to MarineTraffic.com. The port of Savannah shows 33.

Some of the issues affecting the loading and unloading of shipping containers may continue into 2022.

The International Maritime Organization has implemented new rules to reduce carbon footprints, which are currently met by slowing ships down.

And because ships aren’t being unloaded enough, they are returning to Asia without enough empty space, meaning less goods are able to make it back when they return.