Shamima Begum CAN’T go back to court to plead for her British citizenship back, says the government after she gave new interview denying carrying out atrocities and claiming to have been groomed by ISIS

By Danyal Hussain and Stewart Carr For Mailonline

A minister has rejected Shamima Begum’s attempts to return to the UK to battle to regain her citizenship, insisting that the Supreme Court has already made its decision.

ISIS-bride Begum was stripped of her citizenship in 2019 by Sajid Javid and in February this year the Supreme Court ruled on national security grounds that she cannot return to Britain to pursue an appeal against the decision.

However, she announced yesterday she is willing to face trial in Britain for the chance to come back.

In an interview with Sky News, she repeated her denial of accusations that she carried out atrocities as part of IS (so-called Islamic State), saying they are ‘all completely false’.

But, after being played the interview, Business minister Paul Scully was quick to slap down her plea.

He told Sky News: ‘I think the Supreme Court has ruled on this matter. In terms of the actual case, what I don’t want to do is have it out via broadcast.

‘It has been heard by the Supreme Court after the Home Secretary made a really clear ruling.’ 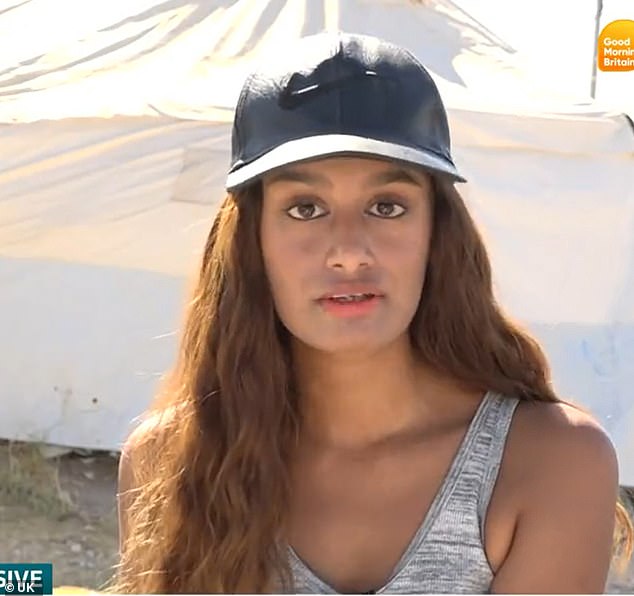 Shamima Begum, 22, pictured at al-Roj prison camp in Syria in September, said she is willing to come back to the UK to face trial

Asked whether she still represented a threat to national security, Mr Scully replied: ‘That I can’t tell. I’ve seen the interview there, but I’m not privy to intelligence documents.’

Begum left her east London home for Syria as a 15-year-old schoolgirl in 2015.

Now aged 22, Begum insists she did not hate the UK when she fled to Syria to join the terror group and has repeated her plea for a chance to fight accusations against her in court.

She denies any involvement in terror activities and spoken previously of how she wanted to be brought back to the UK to face charges.

Begum has ‘hopes and dreams’ but has no plan B if her citizenship is not reinstated.

She told the broadcaster: ‘I’m willing to fight them in a court of law but I’m not being given a chance.’

Begum said her decision to leave the UK as a teenager was not made quickly and that it was something she ‘thought about for a while’.

She said: ‘I didn’t hate Britain, I hated my life really.

‘I felt very constricted, and I felt I couldn’t live the life that I wanted in the UK as a British woman.

‘I feel like the only crime I committed was coming here so I would be willing to go to prison for that.  But for the accusations against me, I’m just going to have to fight against them.’

Begum remains in the al-Roj refugee camp in Syria, which she said has become a ‘more scary’ place to live in.

She said: ‘For a long time it wasn’t violent but for some reason it’s become more scary to live here. Maybe the women have got tired of waiting for something.’

She said that she would like to reconcile with her family ‘when the time is right’, adding: ‘I don’t think they failed me, in a way I failed them’.

Begum has previously told how she married Dutch convert Yago Riedijk 10 days after arriving in IS territory, and had three children all of whom died.

She said when she goes to sleep she thinks of ‘my children dying, the bombings, the constant running, my friends dying’.