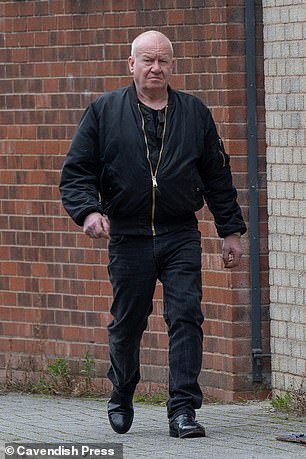 Neil Rowlinson (pictured outside court), 57, sent roses, £300 worth of jewellery, Chanel No 5 perfume and a bottle of Veuve Clicquot to Geraldine McGettrick when she dumped him

A jilted boyfriend has been fined £250 for stalking his blue-haired ex-lover after she broke off their nine-month relationship.

Neil Rowlinson, 57, sent roses, £300 worth of jewellery, Chanel No 5 perfume and a bottle of Veuve Clicquot to Geraldine McGettrick when she dumped him.

Miss McGettrick, who is in her 50s and divorced, complained to police when she got a package saying ‘food parcel’, containing vegetable peelers, carving knives and a drill.

She was said to be alarmed and distressed by the gifts and his messages – and even thought about taking her own life.

Police warned Rowlinson, a plumber from Stockport, Greater Manchester, to stay away from Miss McGettrick.

But he turned on her publican ex-husband Anthony Mirdad, posting messages falsely smearing him as a paedophile because he mistakenly thought they were together.

One post read: ‘You do realise Gerry has been calling you a paedo to everyone – that is why she divorced you.

‘I do not think you will be doing anything with your partner’s kids anytime soon. You brought this against upon yourself. You are welcome to her.’ 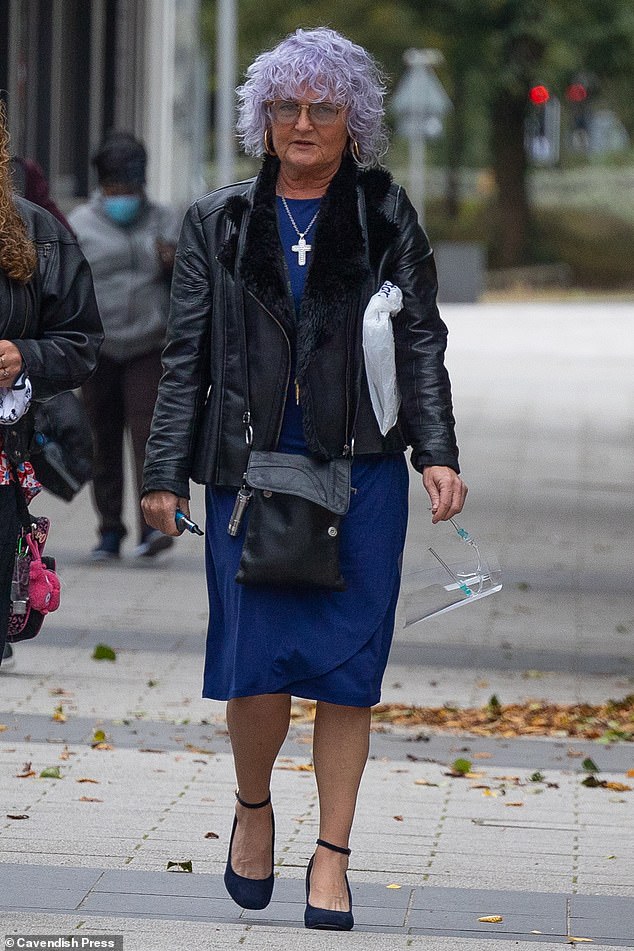 Miss McGettrick (pictured outside court), who is in her 50s and divorced, told police when she got a package saying ‘food parcel’, containing vegetable peelers, carving knives and a drill

In a statement, Miss McGettrick said: ‘This has turned me into a nervous wreck – I am now paranoid to go outside as he has caused me so much grief.

‘Originally he helped me when I had a broken hip but was a dominant character and would hover in and out of my kitchen.

‘I didn’t want him in my life any more and I didn’t want the behaviour he was displaying so I asked him to move out.

‘I knew he was sending items to me and it all became too much. I was upset and at one stage I did say I was thinking about suicidal.

‘He took vegetable peelers and sent them to me in the post. He also gave me an electrical drill and there were more and more presents.’

She added: ‘This was an ongoing incident. I feel his behaviour is going to escalate further.’ 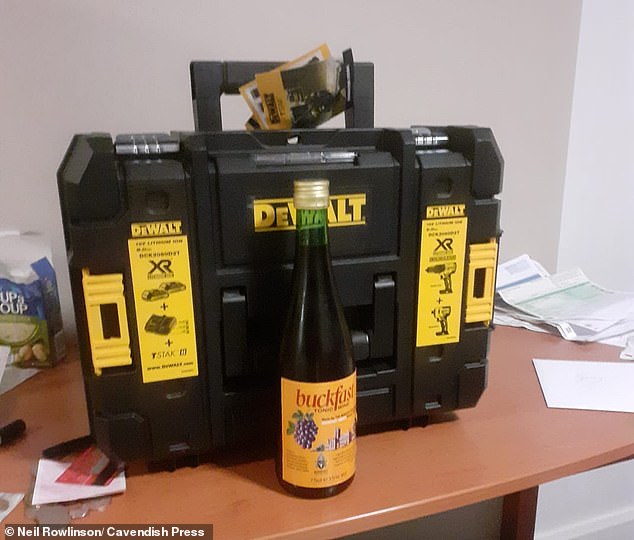 Miss McGettrick, who is in her 50s and divorced, told police when she got a package saying ‘food parcel’, containing vegetable peelers, carving knives and a drill (pictured) 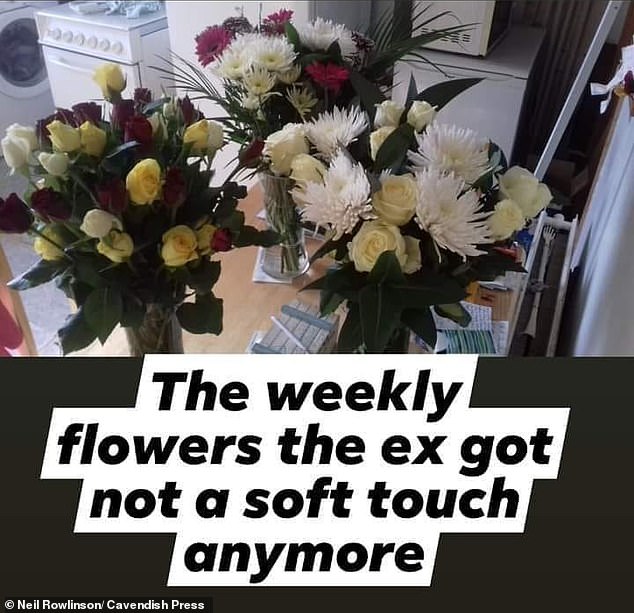 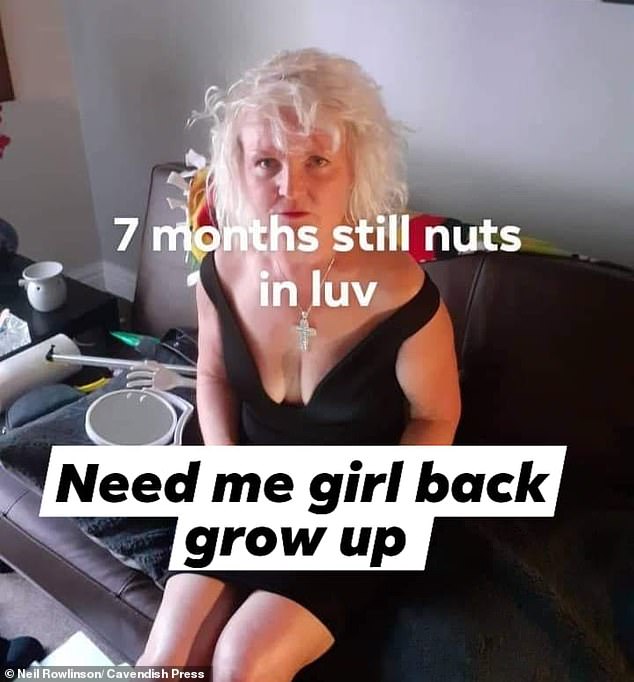 Mr Mirdad said: ‘Mr ex-wife and I divorced in 2007 and I have never even met this man.

‘Yet he started posting about me calling me names and saying she had previously been involved with a person who was in a paedo ring and that he wanted to smash my pub up.

‘Everything he posted disturbed me. The fact is when we divorced, it was nothing to do with paedophiles. I am just distraught about the whole incident.

‘It is beyond me why he would put this on social media for all to see. It has put me in fear of my personal safety and for my business.’

Prosecutor Miss Eileen Rogers told the hearing: ‘Geraldine and this defendant were in a relationship for around nine months and it first started when the defendant moved in with her after she had had a hip operation.

‘But following a period of time living together, the complainant decided the relationship was not working and she did not to be with him due to his controlling and domineering character.

‘On 6 Dec 2020, his behaviour became even more bizarre towards her and the police advises for him not to have contact.

‘However, he continued to contact Geraldine against her wishes by sending letters and presents to her address as well as sending calls and texts.

‘The defendant also used his own family to try and make contact with the complainant.’ 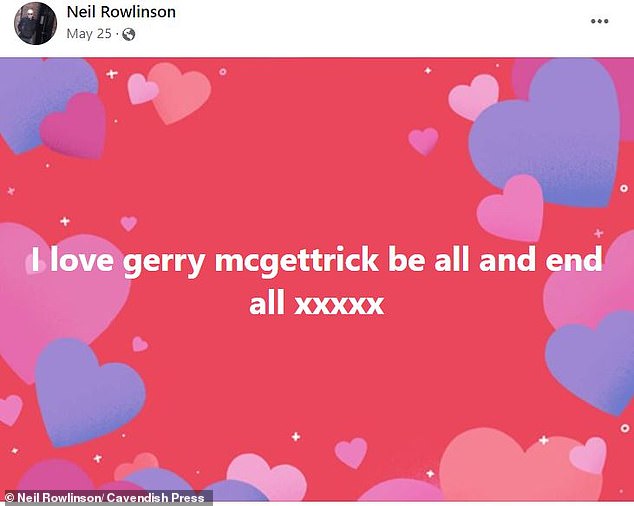 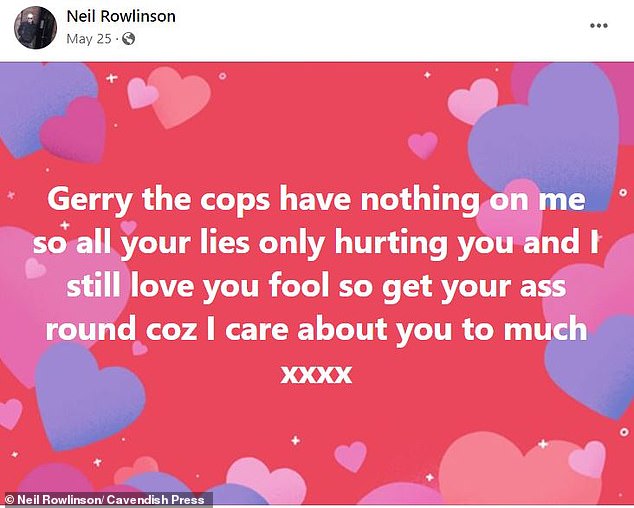 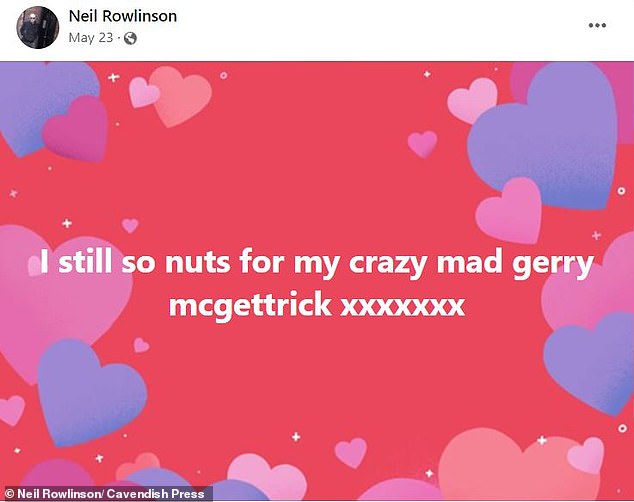 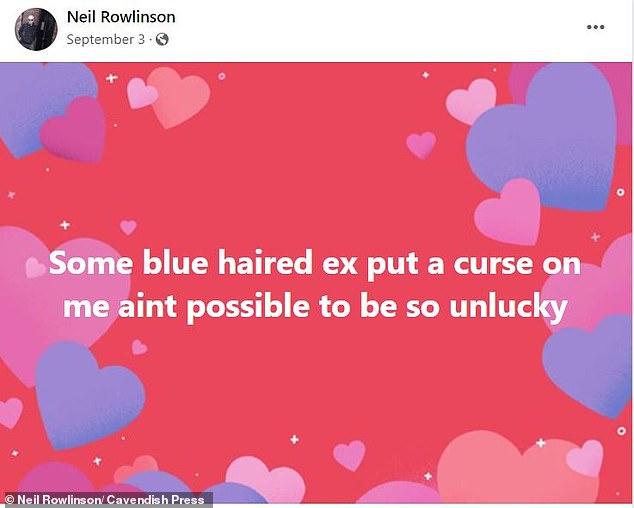 She continued: ‘On 9 Dec 2020, he was abusive and aggressive towards her and she called the police as she was scared for her own safety.

‘A statement was taken from her and the defendant was given a final warning not to make contact with the lady again.

‘On 10 Jan 2021, he sent a box of presents with items in it, which was labelled ”food parcel”. There were a number of kitchen knives in the parcel.

‘She had not requested them. She was alarmed and distressed by the presents he was sending her. She was very concerned.

‘He sent a love heart, winking face and knife emojis to her by electronic communication and at one stage she called the defendant saying she wanted to kill herself because of the bombardment.’

Miss Rogers added: ‘Mr Mirdad had been married to Geraldine’ for 19 years and had divorced but the defendant posted Facebook messages to him and his pub’s Facebook account make reference to him being involved in a paedophile ring. Geraldine later said the defendant posted the messages but of jealously because he thought she was back with Mr Mirdad – but that was just not the case.’

His lawyer Gavin Clarke said: ‘There has been 11 separate incidents over this period of time.

‘He has attended her property unwanted and has left flowers on two occasions, jewellery to the value of around £300, Chanel No 5 perfume, Veuve Clicquot Champagne and other gifts.

‘There has been no threats or intimidation. It is unwanted attention. He has also sent cards saying I miss you and I love you.’

‘The two had been in a relationship for a long time but that ended in December 2020.

‘Police spoke to the defendant and advised him that contact was no longer wanted. He has not bombarded her.’

He was sentenced to 12 weeks jail, suspended for two years, and to complete a Building Better Relationships programme plus 270 hours unpaid work.

He was banned from contacting both Miss McGettrick and Mr Mirdad for two years under the terms of a restraining order.

And Rowlinson was ordered to pay Mr Mirdad £150 in compensation and also told the pay a £128 victim surcharge.