By Valerie Elliott For The Mail On Sunday

It was reputedly created for a royal wedding almost a century and a half ago, but the Battenberg cake is set for a comeback next year to coincide with Queen Elizabeth’s 70 years on the throne.

According to a recent survey, the marzipan-covered cake – famous for its distinctive chequered pattern of pink and yellow – is set to take centre stage in next year’s festivities, along with the Victoria sponge, Britain’s favourite cake.

Although Queen Elizabeth’s 70th anniversary is in February, the occasion will be marked in earnest with an extended Platinum Jubilee bank holiday weekend next June.

The Battenberg was originally said to have been produced for the 1884 wedding of Queen Victoria’s granddaughter, Princess Victoria, to a German prince, Louis of Battenberg.

The couple were the future maternal grandparents of the Duke of Edinburgh, who died earlier this year aged 99. Early recipes for the cake featured nine panels of sponge. Food historians say that the four-panel version was introduced when bakeries began mass-producing the Battenberg in the 1930s. 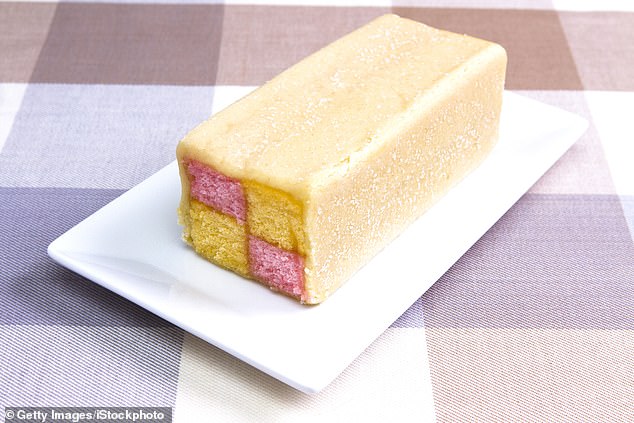 It was reputedly created for a royal wedding almost a century and a half ago, but the Battenberg cake is set for a comeback next year to coincide with Queen Elizabeth’s 70 years on the throne

A food industry expert said last night: ‘There is a certain irony that the Battenberg is going to enjoy a resurgence in popularity during the Jubilee year. Although it is very much a British creation, let’s not forget that the family changed their name to Windsor during the First World War because of increasing anti-German feeling in Britain.

‘But for it to enjoy a resurgence in popularity in 2022 of all years would be a nice tribute to the Duke.’

Bosses at homeware specialist Lakeland, in its annual trends survey, predict that next year there will be ‘a return to traditional British bakes as customers fly the Jubilee flag in style’.

They add that sales of Battenberg baking tins have recently increased by 30 per cent. The company’s head of buying, Philippa Simons, said: ‘We are predicting Brits will embrace the street party and roll out a summer of celebrations for the Platinum Jubilee.’

The survey also found that the Victoria sponge remains the nation’s favourite, although the popularity gap between it and chocolate cake has narrowed from eight per cent to two per cent over the past three years.

The remaining top five favourites are banana bread, cheesecake and lemon drizzle, while carrot cake is in sixth place.

Other findings showed that 30 per cent of people questioned had cooked a pizza from scratch in the past 18 months.

Another 28 per cent tried making their own pastry, although just five per cent had a go at doing a baked Alaska – a notoriously difficult dish to master.