Kyle Rittenhouse was acquitted of all charges on Friday, marking the end of a dramatic and divisive two-week murder trial that had sparked debate over gun rights in the US.

Lawyers for the 18-year-old managed to successfully convince the jury that their client acted in self-defense when he fatally shot two men during a protest against police brutality in Kenosha last August.

The verdict ended one of the highest-profile civilian self-defense cases in the US, and also marked a career-defining trial for defense attorneys Mark Richards and Corey Chirafisi. 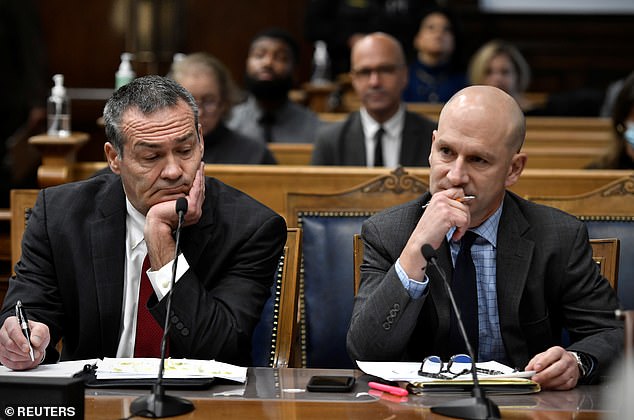 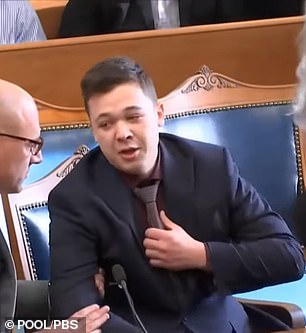 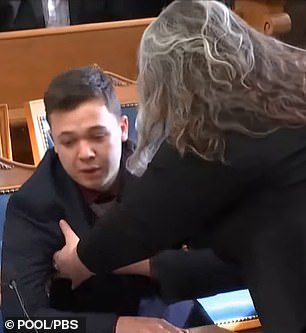 As the first verdict was read, Rittenhouse, 18, started to shake as he fought back tears. But by the end he could hold them no longer and he collapsed into his chair then hugged defense attorney Corey Chirafisi

The 59-year-old lawyer has spent most of his career representing clients accused of homicide, drug charges, sexual assault, burglary, and other crimes, after earning his law degree from the University of Wisconsin, Madison in 1987.

Richards is well known and respected in legal circles, having served as prosecutor in Kenosha and Racine counties before starting his own practice in 1990. He is currently a partner at Richards & Dimmer, S.C. in Racine. 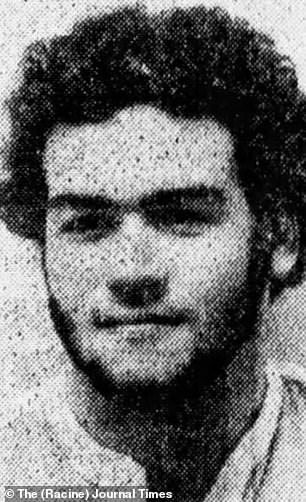 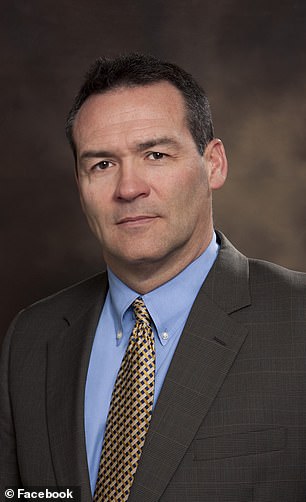 Richards, a Racine-based criminal defense attorney, served as prosecutor in Kenosha and Racine counties before starting his own practice in 1990. He is pictured left in his yearbook photo when he was a student at Park High School, where he competed in swimming 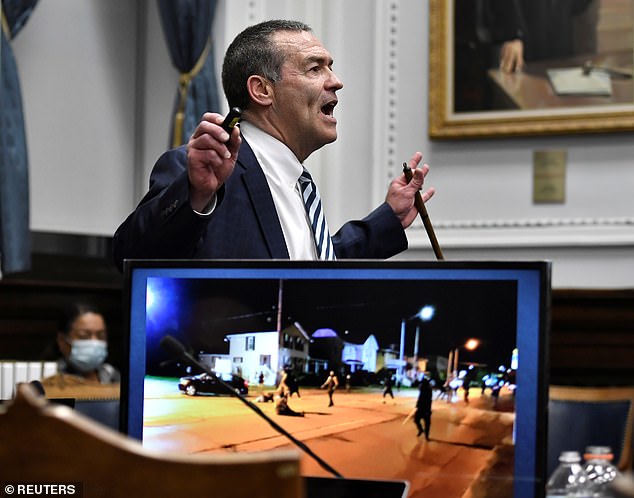 Richards, 59, is known in legal circles for his ‘gruff and aggressive’ reputation

On his firm’s website, he boasts of his ‘leave no stone unturned’ type of representation, his experience working on ‘over 100 jury trials’ – which he describes ranging from ‘simple two-day’ DUI cases to ‘month-long’ homicide trials.

Among his most notable courtroom victories was in 1999, when Wisconsin prisoner Kurtis King, who was accused of strangling his cellmate, was cleared of first-degree intentional homicide charges after raising questions about the guards’ credibility.

More recently, in 2019, Richards represented Tyler, 22, and Jacob, 25, Huffines who were accused of running an illegal marijuana vape operation from their family home.

Fellow Racine attorney Robert Keller vouched for Richards’s success as a formidable lawyer and his ‘gruff and aggressive’ reputation in an interview with Kenosha News earlier this month.

‘He’s always carried himself that way,’ he said. ‘In criminal cases, generally speaking, that’s an excellent trait for someone to have.’ 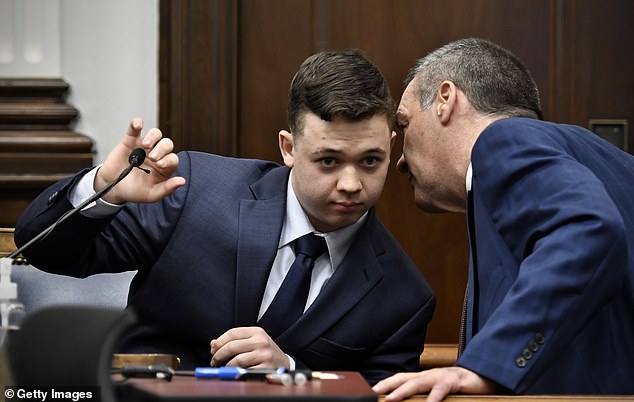 On his website, Richard boasts of his ‘leave no stone unturned’ type of representation and his experience working on ‘over 100 jury trials’

Brian Dimmer, Richards’s partner at their Racine law firm, said his colleague’s best asset is being able to ‘exude confidence from the position of his client,’ and added that juries ‘are captivated by that confidence.’

A Journal Times feature 20 years ago described Richards  as ‘hot-headed, impulsive and loud.’

His former associate Christy Hall said Richards was ‘abrupt, both inside and outside of the court,’ in a 2001 interview.

Jurors indeed got a glimpse of that during the defense’s opening statements when Richards said the N-word twice as he repeated the words of one the men his client shot dead last year.

Outside of the court, Richards is an avid swimmer, sailor and skier, according to the Journal Times.

He was first team All-Racine County in swimming at Park High School in 1980 and is said to swim almost every day at a local YMCA.

Among the key moments of the trial was the defense’s risky decision to allow Rittenhouse to take the stand.

Rittenhouse broke down sobbing as he recalled the events and portrayed himself as wanting to help others by providing medical aid and extinguishing fires. He said he used his gun only after being attacked and ambushed. 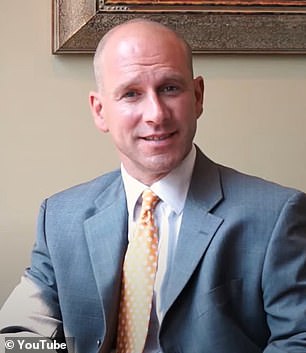 Of the defense duo, attorney Corey Chirafisi, is a little smoother around the edges.

He’s described as having devoted his career to ‘solely to defending individuals charged with criminal and drunk driving offenses.’

Chirafisi, was born in Burlington, Wisconsin, earned his law degree at The City University of New York School of Law and was admitted to practice law in Wisconsin in 1998. 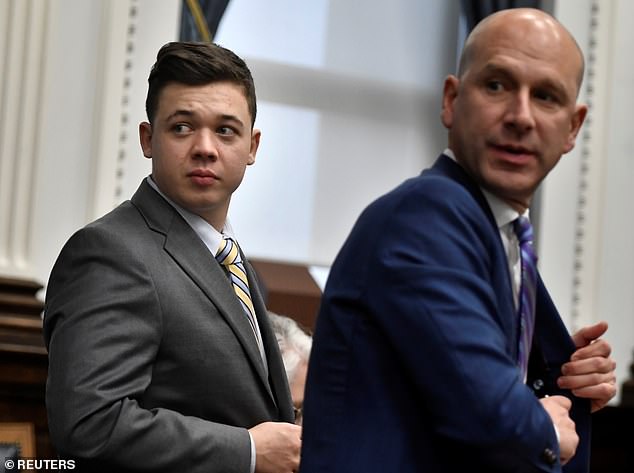 He attended Burlington High School where he played baseball and apparently took an interest in law and public policy, having participated in a mock city council in 1985.

However, his roots in law and litigation can be traced further back to when he was 11, when his parents launched a $70,000 lawsuit against his dentist for allegedly extracting the wrong tooth, according to a Journal Times report in 1983.

In a 2014 promotional video describing his style, he said: ‘I try to be the style of lawyer I didn’t like to litigate against when I was a prosecutor. I like to be the lawyer who causes as many problems for the government as I can.’

When the defense requested a mistrial ahead at the announcement of the verdict Friday, attorney Chirafisi argued that they initially received an inferior copy of a potentially crucial video from prosecutors.

Attorney Natalie Wisco played a small but crucial role in the defense’s motion for a mistrial earlier this week, which argued in part that the state failed to provide high-definition drone footage central to their case in a timely fashion.

Wisco was brought on the team from Richards’s law firm, where she has worked as criminal defense attorney since 2017.

According to her profile, Wisco has dedicated her practice to representing clients in cases involving juvenile delinquency, restraining orders, parents in CPS actions and appellate cases.

She attended the University of Iowa as an undergrad before earning her Special Recognition for Public Service and Certificate in Litigation Practice Marquette University Law School in 2017. 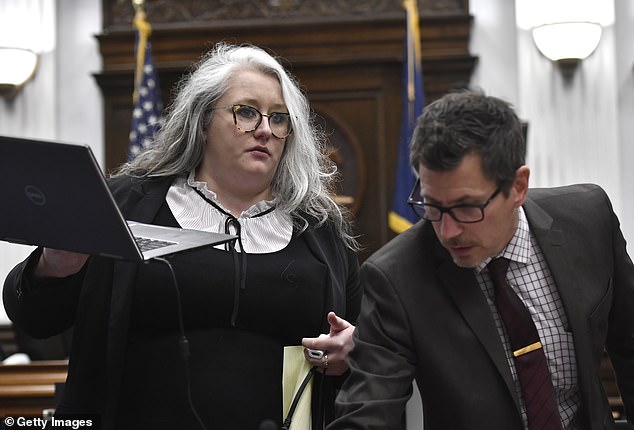 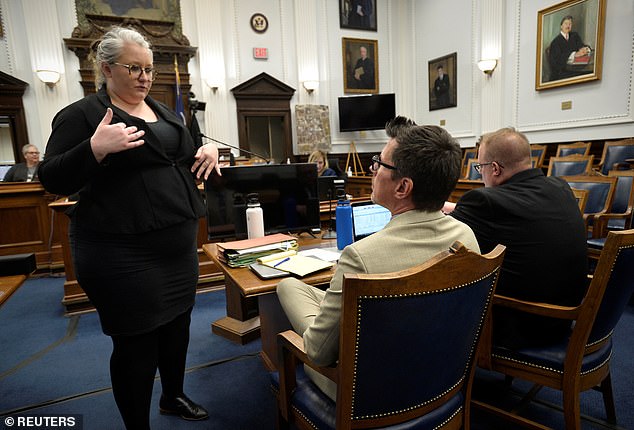 Natalie Wisco, an attorney for Kyle Rittenhouse speaks with District Attorneys Thomas Binger and James Kraus before proceedings on November 12

Wisco addressed the court for the first time in proceedings on Wednesday, when the defense claimed they were initially sent a 3.6 megabyte file with a lower quality footage of Rittenhouse ‘pointing his gun’ at people’ while the prosecution used an 11.2 megabyte copy.

She explained that she had never viewed the footage on her phone and that the file name and creation time of the footage supplied by the state on November 5 was different to that of the high-definition footage of which they only learned later.

The difference was only exposed in court Friday, she explained, when the state did not have an exhibit ready for the judge to view and so she played the defense’s version – which was markedly different in quality.

‘This is your best picture?’ asked the judge of the blurry image – a request that prompted Kraus’s admission that they had better.

On Wednesday Wisco was blunt.

‘There is no way that what ADA Kraus is saying is true because the file name [we received] should have been exactly the same as the one provided to the state crime lab,’ she said.