Kyle Rittenhouse, who was found not guilty on all charges Friday in a controversial trial that has divided the nation, may possibly have a defamation case against President Joe Biden over reference to ‘white supremacists’ in a video, experts said.

The video was posted in a September 2020 tweet, which could now possibly cause Biden legal trouble, according to lawyer Todd McMurtry, who helped Nicolas Sandmann sue news outlets for upward of $800 million for defamation. The now-19-year-old famously settled with CNN and The Washington Post after they deemed him a racist when he was seen in viral video footage wearing a MAGA hat.

Biden, 79, tweeted on September 30, 2020: ‘There’s no other way to put it: the President of the United States [Donald Trump] refused to disavow white supremacists on the debate stage last night.’

Although Trump was not asked specifically about Rittenhouse’s actions on the debate stage at the time, the 18-year-old was featured in the tweeted video holding a rifle in the streets of Kenosha, Wisconsin, in August 2020.

‘What you take from this tweet is that Kyle Rittenhouse was using his rifle and engaging in white supremacist misconduct, so it’s actionable,’ McMurtry told Fox News on Friday after Rittenhouse was acquitted of all charges against him.

The lawyer admitted the 18-year-old was ‘not necessarily going to win’ but it is ‘actionable.’ 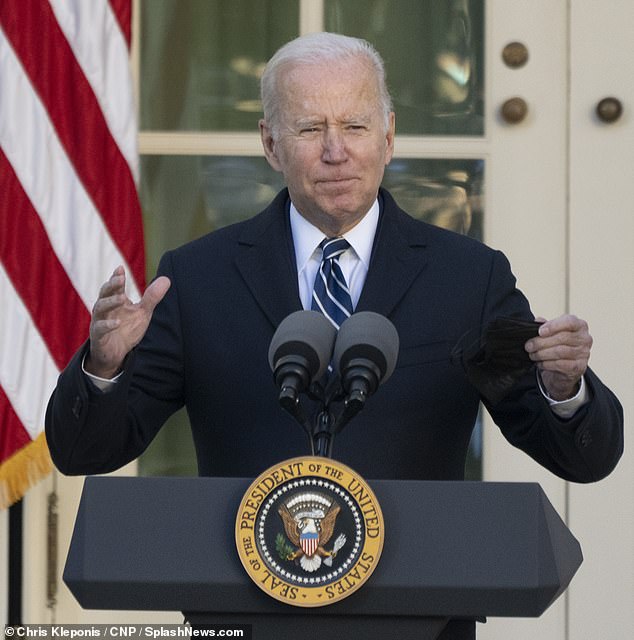 Lawyer Todd McMurtry said President Joe Biden, 79, (pictured) could face a defamation case by Kyle Rittenhouse after insinuating he was a white supremacist in a campaign video denouncing Donald Trump from September 2020 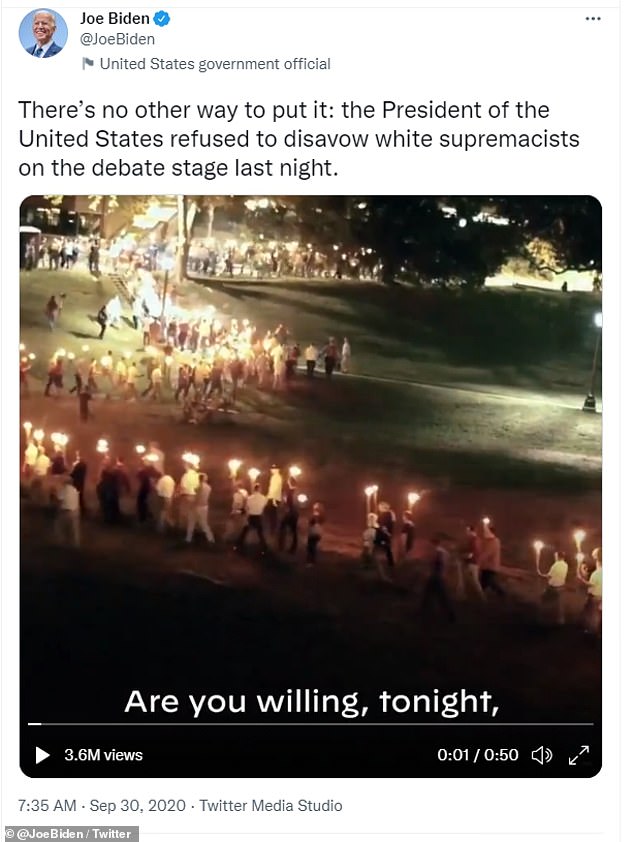 The September 2020 tweet featured a video that at one point showed Rittenhouse. Biden claimed in his tweet that Donald Trump ‘refused to disavow white supremacists’ 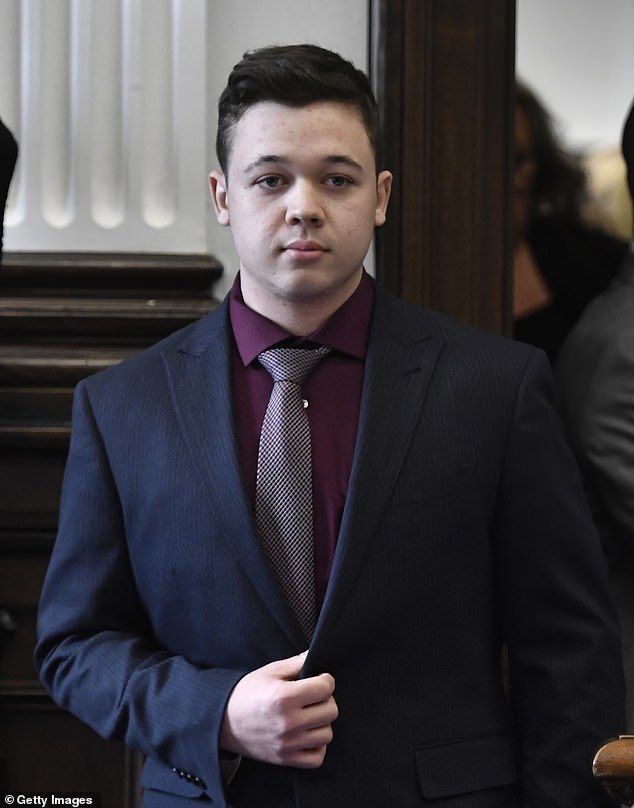 Rittenhouse, 18, was as acquitted this week by jurors on all charges – two counts of homicide, one count of attempted homicide for wounding a third man, and two counts of recklessly endangering safety – after killing two people during protests marred by arson, rioting and looting on August 25, 2020, in Kenosha, Wisconsin 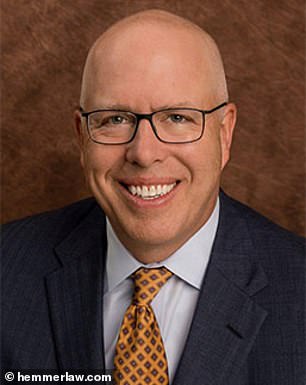 Civil rights lawyer Leo Terrell warned Biden on Fox News that the now-president couldn’t justify his remarks and that he’s ‘going to have to pay for and justify’ his actions.

Biden released a statement following the verdict Friday, saying: ‘While the verdict in Kenosha will leave many Americans feeling angry and concerned, myself included, we must acknowledge that the jury has spoken.’

The president also said he knew ‘we’re not going to heal our country’s wounds overnight’ but he remains ‘committed’ to doing ‘everything in my power to ensure that every American is treated equally.’

Vice President Kamala Harris also told reporters that the ‘verdict speaks for itself.’

‘It’s clear, there’s still a lot more work to do,’ she said before boarding Air Force One in Columbus, Ohio. 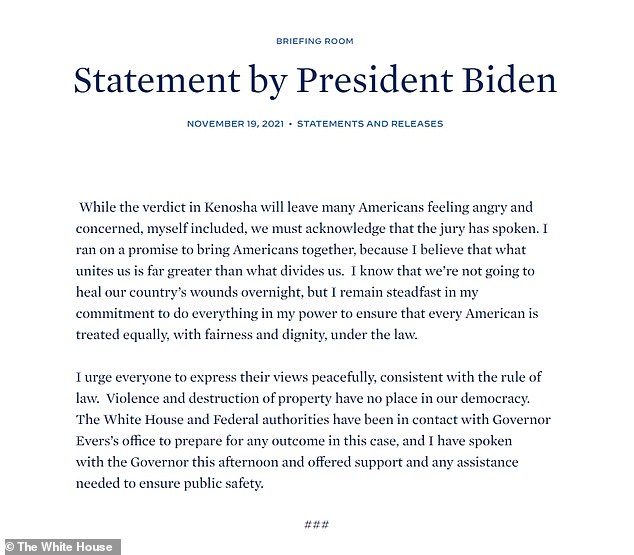 McMurtry also argues that Sandmann and Rittenhouse have similar cases: both were minors when the event occurred and were private figures at the time.

Although household names now, without being public figures or celebrities beforehand, Rittenhouse and Sandmann only have to prove Biden’s negligence, instead of a higher burden of proof actual malice, the lawyer said.

Sandmann has also encouraged Rittenhouse to sue media outlets for defamation as well.

‘The parallels between me and Rittenhouse are impossible not to draw,’ Sandmann wrote in an op-ed for DailyMail.com. ‘The attacks on Kyle came from the national news media, just as they came for me.

‘So every single label on Kyle as a ‘terrorist’, ‘white supremacist’, and ‘school shooter’ in the streets of Kenosha, will only ever be withdrawn after the damage has been done.

‘So, if Kyle is prepared to take on another burden in his early life, with the acceptance that it might result in nothing, I answer, give it a shot and hold the media accountable,’ he wrote for DailyMail.com. 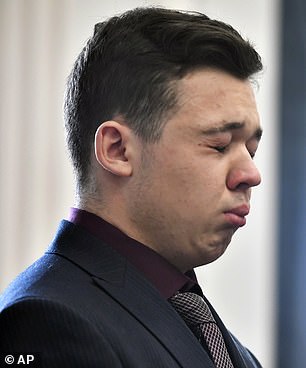 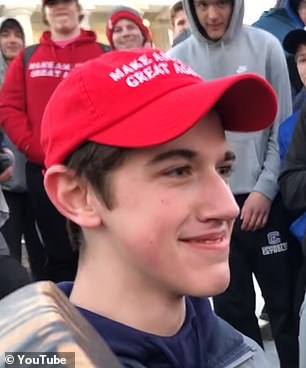 Rittenhouse, who was famously mocked for crying on the stand, has been encouraged by Sandmann (right) to go after the media and that ‘the parallels between me and Rittenhouse are impossible not to draw.’ Sandmann won an undisclosed amount in a settlement deal with CNN and the Washington Post and told Fox News’ Sean Hannity that he is still currently suing six other media outlets 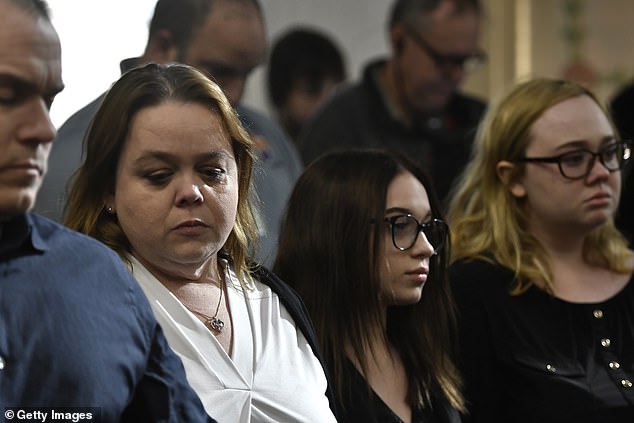 Sandmann sued CNN after it covered the viral moment of him staring down a Native American playing traditional music on the steps of the Lincoln Memorial while the teen wore a MAGA hat.

He also won a lawsuit against the Washington Post in June 2020 for an undisclosed amount.

Sandmann told Sean Hannity on Fox News Channel that he is still currently suing six media outlets and the proceedings are ongoing.

McMurtry thinks Rittenhouse may have a case against MSNBC.

‘I think Rittenhouse may be able to do the same thing when commentators on MSNBC say he’s a school shooter, a white supremacist, even a vigilante.

‘Lots of media people said he was a murderer, and I think that’s actionable because that suggests that he committed a crime, and we now know that he didn’t. When you just throw this stuff out there, you take risks.’

Rittenhouse’s mother Wendy also spoke to Hannity shortly after her son cried on the stand.

When asked about Biden referring to son as a white supremacist, she said: ‘When I saw that, I was in shock, I was angry. President Biden doesn’t know my son.’

She later claimed that Biden ‘did it for the votes’ and that he ‘defamed’ her son.

She also admitted her son ‘had nightmares from this’ and has ‘a lot of healing to do.’

Rittenhouse was acquitted by jurors on all charges – two counts of homicide, one count of attempted homicide for wounding a third man, and two counts of recklessly endangering safety – after killing two people during protests marred by arson, rioting and looting on August 25, 2020, in Kenosha, Wisconsin.

Rittenhouse will also appear on Fox Monday to talk with Tucker Carlson and it was revealed that Fox Nation filmed a documentary during his trial that will air in December.