It was my 20-year-old daughter who asked in passing if I’d heard about the women claiming to have been injected in a city-centre pub in Dundee.

They’d been ‘jabbed’ with sedative drugs, she told me.

The following day, I asked my students if they’d heard about this. They had. And none of them doubted it was true.

After all, there were claims right across social media – and from up and down the country – of puncture wounds in arms and legs, of erratic behaviour and long periods of memory loss. 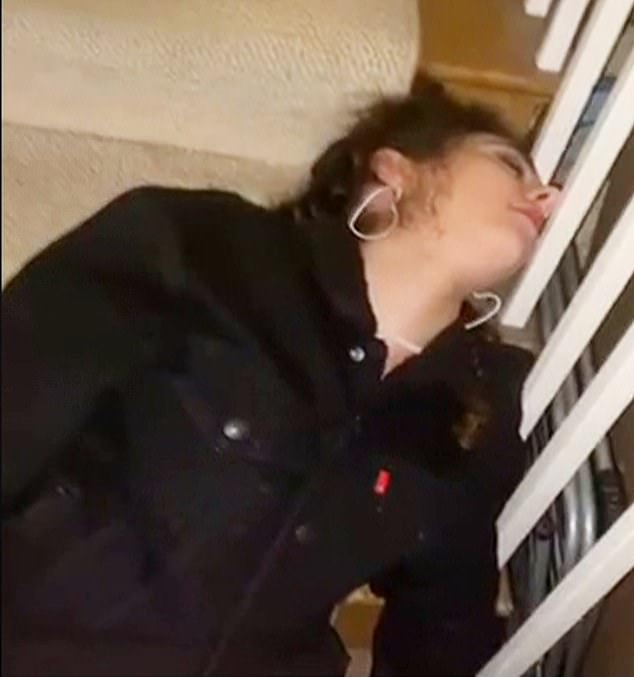 Out cold: Student Ilana El-baz, 20, filmed after an alleged spiking

There were ‘horrifying’ reports in Nottingham, Exeter, Durham and Leeds. Students in Glasgow, Edinburgh, Aberdeen and Stirling had all fallen victim to this wave of assaults.

‘I was out last night,’ one woman wrote. ‘I have no memory after half 11… It wasn’t until later in the day that I noticed a jab mark on the back of my arm.’

In Dundee, where we live, the university emailed every one of its 20,000 students and condemned the attacks as ‘unacceptable, reprehensible, and ultimately life-threatening’.

Women were scared and confused. And why wouldn’t they be?

We have long been wise to the phenomenon of drink spiking, where sexual predators take advantage of clubs and bars to lace drinks with so-called ‘date-rape drugs’ such as Gamma-Hydroxybutyrate (GHB), tranquillisers such as Valium or Rohypnol, or extra shots of stronger alcohol.

Some cases, it is said, are followed by assault or rape.

Now, it appeared, the tactics had switched: potential rapists were using syringes to get drugs straight into the bloodstream.

A petition demanding new laws to ‘thoroughly search guests’ on entry to nightclubs gained 160,000 signatories, and earlier this month the UK Parliament petitions committee discussed what it should be doing in response.

What no one did, however, was question whether the phenomenon was really happening at all.

It’s an uncomfortable truth, not least for the young women who sincerely believe that they are victims, but it’s entirely possible that there is no epidemic of needle spiking. And that what is taking place is in our heads. 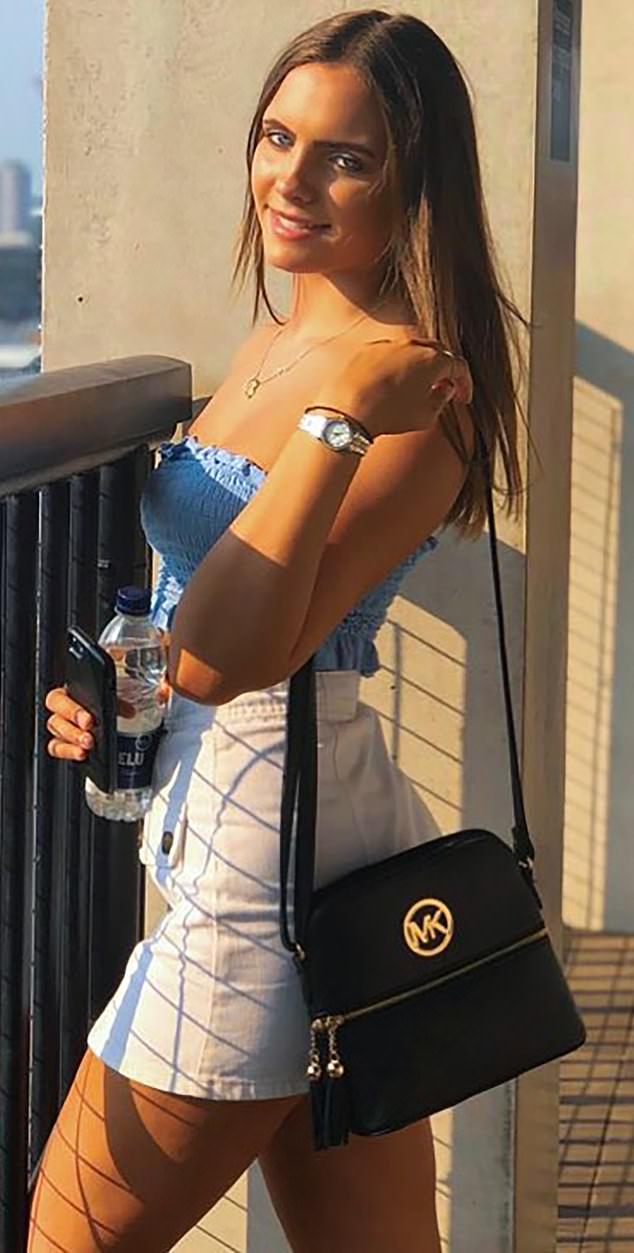 Student Sarah Buckle, pictured, says she awoke in hospital after a night out with a needle mark on her hand

There is, after all, a confounding question at the heart of all this: why would anyone inject a drug when they could equally successfully put it in a drink, with less risk and more plausible deniability?

Is it even possible to inject people with date-rape drugs?

Syringes are certainly easy to obtain in this country. They can be bought in pharmacies or online.

And, yes, GHB, the drug most usually associated with drink spiking, can in theory be injected.

But as a medical friend explained when I began to investigate, to drug someone effectively in this way would require a relatively high volume of the substance concerned.

This would require a large syringe with a large needle, which would then need to be under someone’s skin for long enough – at least 15 seconds – to dispense enough of the drug to make a difference.

It would be important to conduct this tricky process undetected, even though, as the medic explained, it would be almost impossible for the victim not to feel it. Alcohol could dampen pain, but not eliminate it.

As John Slaughter, senior forensic toxicologist at Analytical Services International, told the Full Fact independent checking organisation: ‘If someone is jabbed with a syringe, then their reflex action is going to be to move away.

‘The opportunity for someone to actually inject enough drug from that syringe to have the effect is, I would think, fairly low. 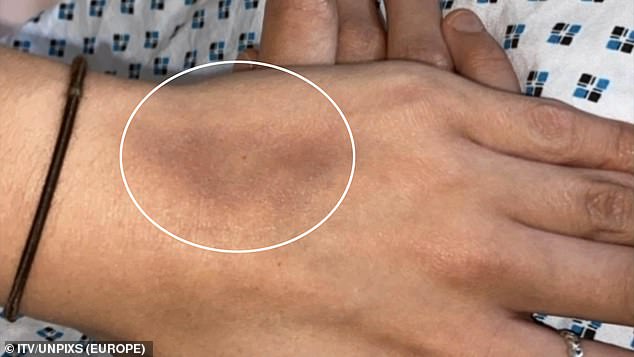 Ms Buckle’s hand. The student said she noticed a small pin prick on her hand, which later developed bruises and began to throb

I’m not saying that it’s absolutely impossible, I’m just saying that, in my opinion, it’s unlikely.’

Adam Winstock, director of the Global Drug Survey, points out that at least half a teaspoon-full of a drug would need to be injected to be effective. ‘That hurts,’ he says.

True, alternative drugs such as benzodiazepines could be used in smaller quantities, but they are not available to the public in injectable form.

And while they could be processed, it would be hard for someone without specialist knowledge. Why not just add it to a drink?

None of this scepticism is proof. We cannot say for certain that none of the reported incidents took place.

Many of the claims on social media carry photographs appearing to show puncture wounds on the upper arm, back and thigh, for example. In some cases, the reported jabs seemed to have pierced clothing.

Yet there are few verified accounts, and that remains the case even where the cases have been investigated.

In Nottingham, for example, police confirmed they had looked at 15 reports of needle spiking. But in only one of those cases did the police believe the injury was ‘consistent with a needle’.

Two men, aged 18 and 19, had been arrested ‘on suspicion of conspiring to administer poison’ but not specifically in connection with any reports of needle spiking.

They have since been released under investigation.

Three women who suspected they had been spiked with needles in Exeter were found to have no traces of drugs in their systems.

Police in St Albans, Herts, investigated a case and found no evidence of a crime.

Then, if you look at reports of drink spiking – generally accepted to be a widespread phenomenon – a remarkably similar picture emerges.

On the surface, the statistics indicate a greater and more established problem than the reports involving needles.

Figures obtained by the BBC, for example, revealed that more than 2,600 incidents of drink spiking were reported to the police in England and Wales between 2015 and 2019.

The true figures are likely to be higher still, as few victims tend to come forward.

A survey by campaign group SOS (Stamp Out Spiking) UK claimed that 98 per cent of people don’t go to the police because they fear they won’t be believed.

Data from Avon and Somerset police suggest they have recorded 486 drink-spiking incidents since 2016, which led to 27 arrests.

But there have been no successful prosecutions. And in 2018, the year when the highest number of incidents was recorded, 122, it seems not a single arrest was made.

In 2018, Police Scotland revealed that they had received 74 reports of drink spiking, but that there had been no convictions for five years.

Meanwhile, new police figures from England and Wales show that just 19 out of 839 sexually motivated drink-spiking allegations in the last five years resulted in a criminal charge.

Has drink spiking, too, been exaggerated?

A 2012 study by doctors at Wrexham Maelor Hospital found something intriguing when they examined women who believed they had been drugged.

Most of them, they established, had been rendered helpless not by ‘date-rape’ substances, but by binge drinking.

The medics found no evidence that any of the women seeking help from emergency doctors had been spiked, although one in five instead tested positive for recreational drugs.

This was only one hospital and no such research has been conducted countrywide. Yet if it’s representative, we have to ask how we reached this state of terror.

Why do we see ‘spiking’ everywhere we look?

The clues may lie in the profiles of those who are the most affected, which is to say young people and, in particular, young people starting university.

There is an increase in reports of drink-tampering every year at the start of the autumn term, which is when thousands of students start socialising, of course.

But there may be more to it than that. Dutch criminologist Hans Boutellier talks about young people’s ‘safety utopia’.

Released from parental controls, often for the first time, they feel at once both free and frightened. School, childhood friends, parents and family are all missing, so new forms of togetherness emerge.

In young women, that might show itself in shared anxiety around strangers, building up a form of mutual understanding about the world and its risks.

I’m also concerned about the stories that we choose to tell ourselves, however.

A form of ‘victim feminism’ has evolved in recent years – a harmful by-product of #MeToo – which elevates the idea that women and girls are automatically ‘at risk’ from male violence and from men.

In some woke circles, maleness itself is problematic and abusive. Men are bad. Young women, in contrast, are de facto vulnerable and need protection.

Perhaps this is why those in authority refuse to act rationally. Instead of seeking out evidence of needle spiking, they simply accept outlandish claims as true – one more nasty threat to add to the charge sheet of nasty threats posed by men against women.

I am struck that we live in an ever more risk-averse world, one which judges ever more facets of human behaviour – from causing offence to not wearing a mask – to be crimes that must be stamped out.

This is a dangerous and growing trend. How long before simply asking someone to ‘man up’ becomes a criminal offence?

None of this is to say that the distress being felt by women is not real. It absolutely is.

But our institutions, from politicians to the police and even our universities, are fuelling a panic which is destroying all perspective.

It seems to trouble very few of us that a generation of young men have been demonised, portrayed as potential rapists.

This is not just wrong-headed, misanthropic and irrational, it is a very modern form of bigotry.

l Dr Stuart Waiton is a senior lecturer in sociology and criminology at Abertay University. He is currently writing a book called The Criminalisation of Everything.