As a physical education teacher in Loudoun County, Virginia, I serve a very diverse community in Leesburg. I love and respect all my students and treat them with dignity despite our differences.

My recent court win is an important step toward protecting freedom of expression for everyone. My hope is that it will encourage educators across the nation to freely advocate for their students without fear of consequence. Some Americans have lost sight of the importance of open debate.

The Loudoun County School Board recently passed a policy that forces teachers to call students by pronouns that are contrary to biology and violate my faith as a Christian.

The policy forces me and my colleagues to subject the very children that we are charged to love and protect to a dangerous ideology that could lead to puberty blockers, hormone therapy, and even sterilization.

While the policy was still under review, I took the time, in my personal capacity, to speak at a school board meeting that was open to the public. I told board members that, as a teacher, I cannot lie to these kids—no good teacher would. However, the policy would force me to do just that, and I urged them to rethink it.

Two days later, I got a call to come into Human Resources, where I was informed that I was being suspended for ‘disruptive behavior.’ 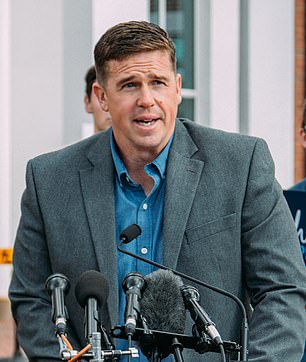 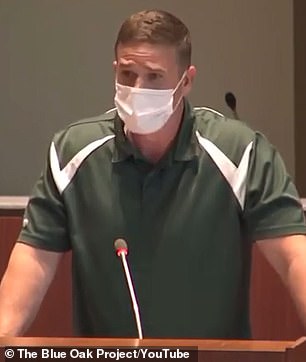 Tanner Cross (right and left), a 38-year-old gym teacher at Leesburg Elementary School in Loudoun County, Virginia, won a legal settlement banning the school board from retaliating against him over his opposition to transgender policies. He is seen on right speaking at the Loudoun County School Board meeting on May 25.

I didn’t understand what was disruptive about expressing my concern for my students at a public school-board meeting in the county where I live and pay taxes. I later came to learn that the disruption they were referring to was five parents’ e-mails sent to my school complaining about my speech at the school board meeting.

As a result of the e-mails, the school board determined that it was enough to jeopardize my family’s livelihood and my future as a teacher. Think about the implications of a school board giving into such demands so quickly—simply as a result of a teacher’s views.

Freedom of expression is a core liberty and a human right, and the school board was trying to take that away from me. I decided to stand up for what I believe in, and to protect my students. I was fortunate to have the assistance of Alliance Defending Freedom to challenge the violation I was facing and defend my rights in court.

First, the court temporarily ordered the school board to reinstate my job. The Virginia Supreme Court later upheld that order. Now the school district has agreed to settle my case.

As part of that settlement, the trial court permanently prohibited the Loudoun County School Board from punishing me for expressing my views. Teachers are just like everyone else; we have legitimate ideas and views we should be free to peacefully express. No government should be able to force its citizens to say things they disagree with.

This is especially true in schools, where the marketplace of ideas should be fiercely protected, both for the sake of freedom and the sake of truth. The court has vindicated those rights for me and for all teachers. I can now confidently continue teaching at Leesburg Elementary School without fear of punishment for expressing my views.

It’s been a long, emotional journey up to this point, but I know it’s worth pursuing. As exhausting as it is, I know there’s still more work to be done to truly protect freedom in Loudoun County.

The school board adopted the policy I objected to, Policy 8040, and two of my colleagues, Monica Gill and Kimberly Wright, have joined me to take a bold stand to see that the same rights that we have outside the school are protected inside the school. Our constitutionally protected freedoms don’t vanish when we walk through the school doors.

Monica, Kimberly, and I know that not every parent sees things the way that we do, and we respect that. But some would rather see certain voices silenced or, even worse, compelled to speak in ways that violate our deeply held faith, instead of being allowed to engage in the debate. 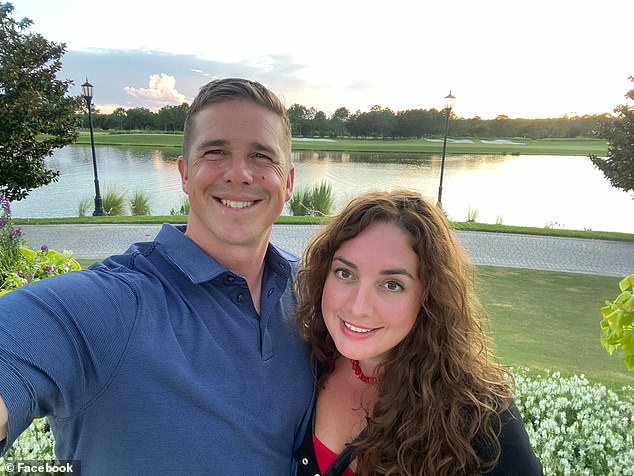 Call it cancel culture, call it censorship, call it what you want—all of our freedoms are threatened when the culturally accepted narrative is the only option for discussion.

America is large and diverse, and some of us don’t agree with the ideas that are touted as truth by cable news networks, Hollywood executives, or political leaders. We shouldn’t be singled out for censorship.

Parents should be allowed to have a say in what goes on in their kids’ schools. We recently witnessed a regime change in the Virginia governor’s office, in part because parents in our commonwealth are waking up to what’s going on.

As a result of what was happening here in Loudoun County, many parents saw that it was time for a change to protect their children from these harmful and radical ideologies. If we’re allowed to debate ideas, kids will learn how to value people while engaging with different opinions in a respectful way.

Silencing opposing voices only teaches kids that you can get your way by bullying others. Teachers and parents have unique viewpoints when it comes to topics like efforts to control COVID-19 outbreaks, Critical Race Theory, and gender identity ideology.

In my case, the Loudoun County Court took us a big step closer toward allowing those viewpoints to be voiced without punishment. I love all my students, and I enjoy teaching them health and physical education. In my classroom, every student will continue to be treated with dignity, respect, and care.

This is much more than a job for me; it is who I am. I don’t see myself as a rebel or revolutionary. I’m just a P.E. teacher who cares deeply about the health and future of my students. Monica, Kimberly, and I are taking a stand for what we believe is right and good for all Americans, not just us.