Unvaccinated mother, 69, wakes from month-long coma on the day her family were taking her off life support after doctors told them ‘there was no chance of survival’ – as son reveals they had chosen her gravestone

An unvaccinated 69-year-old mother who was in a month-long coma has woken up in a medical miracle after doctors said: ‘Your mother is never going to wake up.’

Andrew Lerman and his siblings had even picked out a gravestone for their mom Bettina Lerman, 69, and were planning her funeral down to what she would wear.

He was supposed to be terminating her life support at the hospital in Portland, Maine, on the very day that doctors called him on October 29.

‘I was completely beside myself,’ Andrew told the Washington Post. ‘I dropped the phone because I was going to be terminating life support that day.’

When he got to the hospital with his wife he asked his mom if she remembered anyone coming to visit her after she fell ill with Covid in September.

‘We asked her, do you remember anybody talking to you and coming to see you? And she shook her head yes. So, even though she couldn’t respond, even tho she was in that coma, she knew people came to visit her,’ Lerman told WMTV. 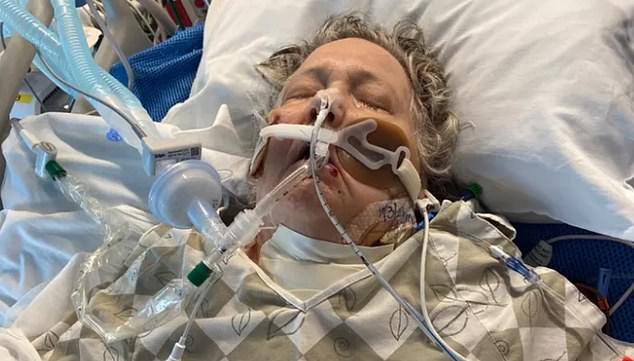 Bettina Lerman while she was in a coma at the ICU in Portland, Maine 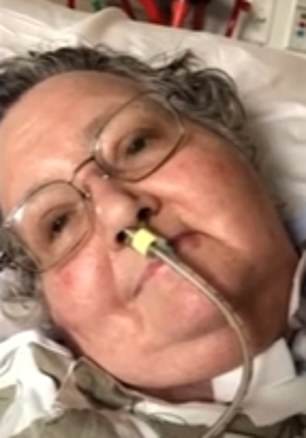 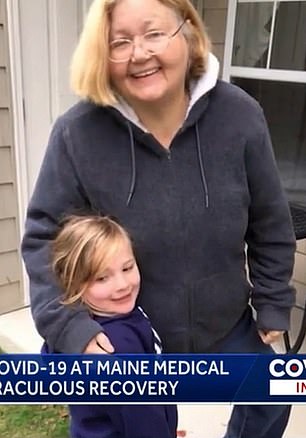 Lerman woke up after more than a month in a coma (pictured: at the hospital, left; and in a family photo, right)

Bettina is a diabetic and had recently undergone a quadruple heart bypass and was also unvaccinated when she was infected in September.

After just a week she was put on a ventilator and went into a coma.

Doctors told Andrew that because of her age and recent surgery ‘there was no chance of survival.’

Andrew and his siblings even travelled to Bettina’s home in Tavares, Florida, to cancel her lease and donate her possessions.

Although she is no longer in the hospital Andrew says that the virus has destroyed Bettina’s lungs and done serious long-term damage.

‘We give her words of encouragement every day. We tell her to keep on fighting,’ Andrew said.

Despite the fact that she still needs assistance breathing, doctors described the recovery as a ‘miracle.’

Andrew told WMTW that his mum plans to get vaccinated in the near future and the experience has changed the whole family’s previously hesitant stance towards the vaccine.

He told the Post: ‘She was planning on getting vaccinated before she left Florida, but she ran out of time.

‘She was going to get vaccinated up here, but she came down with covid.’

‘It’s a miracle and we are by her side as she fights to get better every day. Her doctors are saying she is a medical miracle and have never seen anyone go through what she has and woken up,’ the family wrote.