Five months ago Mujtaba, Mustafa and Adeena Mayar played cricket on a parched patch of rolled mud in a Kabul park, roaming cattle and goats the only spectators.

Their father, Bahawar, worried each time his two sons and daughter left home to play the game they loved because of Taliban bombs and abductions. The 54-year-old former British Army interpreter knew only too well the dangers they faced. Two years earlier another son, Fahim, had been abducted and beaten near the park by the Taliban because of his work for the UK military.

Bahawar himself had survived a Taliban ambush after gunmen pumped 13 bullets into his car as he drove home — one bullet passing under his seat, another smashing through the windscreen and narrowly missing his head. He had received eight death threats, three to his family. 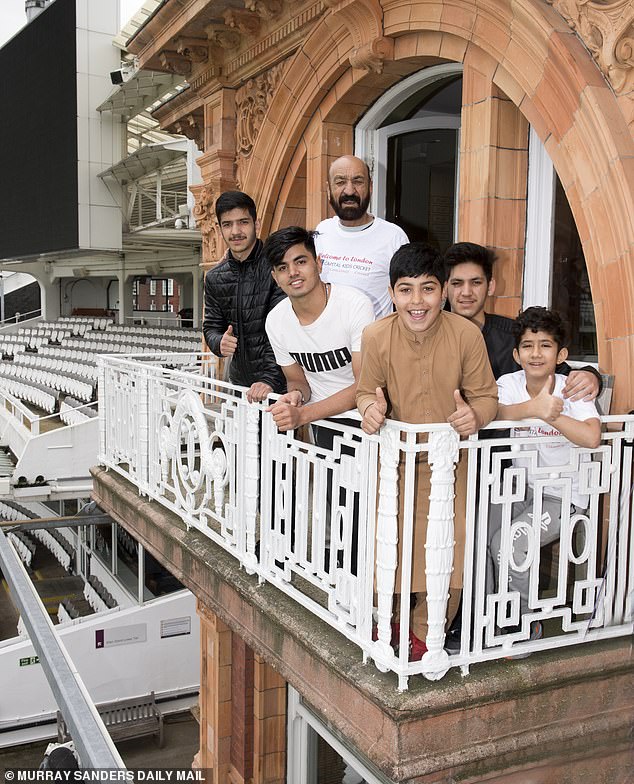 ‘They loved cricket but the shadow of the Taliban always hung over us because of the four years I spent with the British forces,’ Bahawar recalled yesterday. ‘And whenever the family would go to play, there was that danger and fear they might not come back from playing a game in a park — this was the reality of Afghanistan.’

He spoke as he sat beside Mujtaba, 20, Mustafa, 17, and 21-year-old Adeena on the balcony of the England players’ dressing room in the pavilion at Lord’s.

‘Unbelievable… it is a dream come true,’ Bahawar said. ‘The history, heritage, portraits of the greatest players of all countries: this is England and our new home. We are proud to be here.’

His views were echoed by 25 fellow Afghans who accompanied the Mayar family to the ‘home of cricket’ as part of an initiative run by a London charity, Capital Kids Cricket (CKC), to welcome those who arrived during August’s remarkable Operation Pitting. This saw the dramatic rescue of 15,000 Afghans who were in danger at home because of their links to the UK.

Yet more than 10 weeks after arriving, thousands remain in hotels because of the shortage of accommodation in Britain. CKC’s ‘Welcome’ programme is aimed at supporting those families while introducing them to British values — crucially, stressing that boys and girls, men and women, should be treated the same. 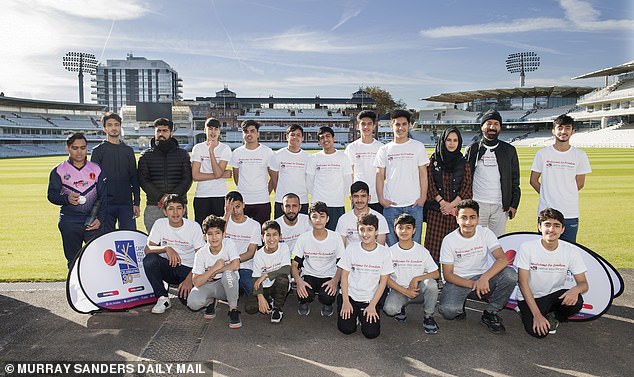 So far, some 120 newly arrived Afghans have taken part in cricket coaching sessions at Lord’s as well as grounds across London. A few had never played cricket but the majority had, despite a lack of equipment and facilities, and one had even represented Afghanistan at Under 17 level.

It was Afghan refugees who first introduced competitive cricket to their homeland, after learning the rudiments of the sport while exiled in cricket-mad Pakistan 30 years ago. All those visiting Lord’s spoke of their pride in Afghanistan’s progress to the recent Twenty20 World Cup in the UAE.

England, they said, was their ‘second team’ but would become ‘first choice’ once Afghans broke into the county game.

In a week when allegations of racism have engulfed the sport, CKC, whose motto is ‘Inspire, Challenge, Change’, hope their work represents a more positive side of cricket. Chairman Haydn Turner said: ‘We are ethnically blind — and through cricket we work with every known ethnicity in London. We read in the Daily Mail the desperate plight of Afghans escaping their country. When families and lone children arrived in London, we were in a unique position to help.

‘For 30 years, we have coached cricket with children in the inner city regardless of colour, creed or gender, particularly kids with mental health issues and emotional problems. We meet a need without pre-conditions.’ 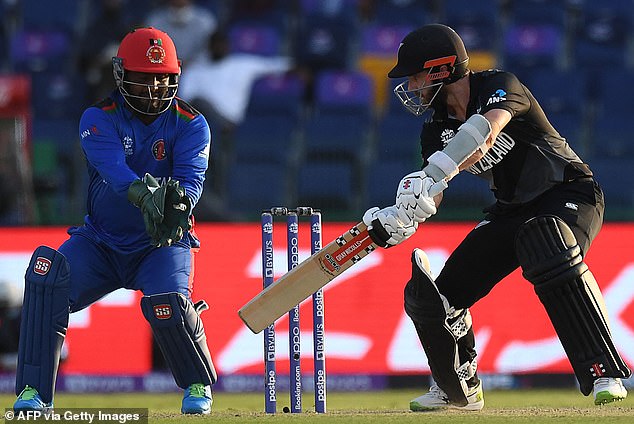 The man tasked with overseeing the Afghan programme, CKC CEO Shahidul Alam Ratan, cites how its work with refugees in London over recent years, and the ongoing cricket coaching of displaced Syrians in the sprawling Shatila camp on the edge of Beirut, will underpin the programme.

The charity has helped more than 300,000 boys and girls since it began more than 30 years ago to help regenerate cricket in state schools, enabling children in deprived communities to play.

‘A few months ago, some of these families did not know if they would escape the Taliban and many left with the clothes they stood in, living through the nightmare of Kabul airport to reach the UK not knowing what awaited them,’ Ratan said. 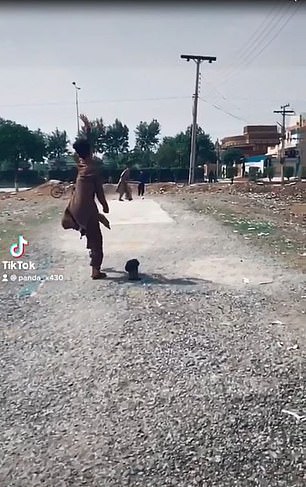 ‘We intend to track these families as they leave London for their new homes and link them to clubs and counties while helping with programmes that will allow them to integrate with communities, learn the values of the UK, improve their health and wellbeing, build their confidence, teach them leadership skills and, importantly, how to work as a team.’

He highlights the success of a CKC initiative called Teams Not Gangs, following a spate of stabbings in the capital, which encouraged children across London to turn their backs on gangs in favour of sport.

Ratan has identified several talented young players. Among them is 10-year-old Azan, who bowls leg-spin and arrived with five brothers and sisters a day before the bombing of desperate Afghans caught in the nightmare crush outside Kabul’s airport.

‘It was very frightening,’ Azan said. ‘There were so many people crushed together, falling on the ground and crying. We did not know if we would ever be safe.’

Azan, whose father was already in the UK, added: ‘To now come to the home of cricket is the most exciting thing I have done. I very much want to play cricket for England, not Afghanistan.’

The children had looked on in astonishment at the giant portraits of the great players lining the stairs to the changing rooms. Sir Ian Botham and Viv Richards proved especially popular, images captured on phone cameras marking the moments.

Bahawar added: ‘Every boy here wants their names on the boards. We are lifted, encouraged by the spirit of Lord’s and those helping us. I am here because the Daily Mail helped me for many years to fight my case when there seemed no hope, only bullets. Now my family will be helped by cricket to learn to work and live with others.’

Anyone wishing to donate to CKC can do so via donorbox.org/ckc-donate