A senior British soldier has been jailed and kicked out of the Army after he forced junior recruits to take part in a naked initiation ceremony.

Rifleman Kieran Trewin, 26, admitted running the humiliating event, described as ‘naked icebreakers’, and forcing young soldiers to stand on a chair and strip off in front of up to 20 colleagues.

They were then quizzed about their sex lives and girlfriends, while father-of-one Trewin ‘slapped’ their genitals, a court martial was told.

The young soldiers – who had all recently joined – were also forced to box each other ‘completely naked’ other than the boxing gloves they had been given.

A military court at Tidworth Garrison, Wiltshire, heard that the ceremony was held behind locked doors in a kitchen at the 1st Regiment, The Rifles barracks in Chepstow, close to the border with England and Wales.

The two-day court martial heard up to 20 soldiers had been enjoying drinks outside a block before heading inside to continue drinking in a company kitchen. 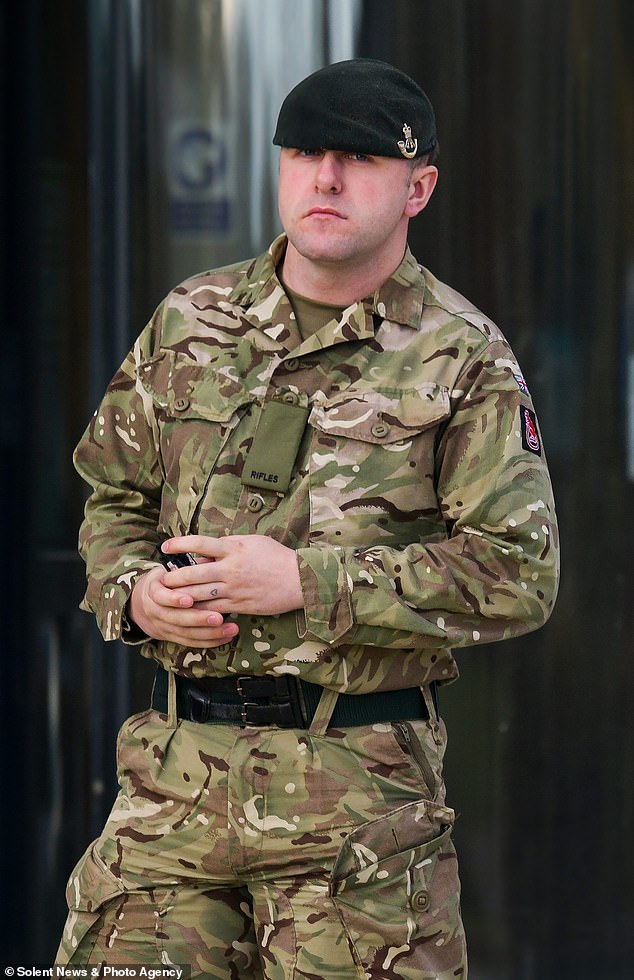 Rifleman Kieran Trewin (pictured), 26, admitted running the humiliating event, described as ‘naked icebreakers’, and forcing young soldiers to stand on a chair and strip off in front of up to 20 colleagues

Once in the kitchen, however, six junior soldiers were instructed to stand on a chair in front of the rest of the company and ‘strip’ until they were ‘completely naked’.

One junior soldier refused to take part in the ritual, and left for his room, the court heard.

But the rest did what they were told.

One of the soldiers – who cannot be named for legal reasons – said: ‘The night was not a regular occurrence, and at first I thought it was a social event…

‘Our names were called out and we went to the front… I didn’t know this was going to happen, it caught me by surprise.

‘At that stage we had been drinking for about an hour. Me [and five other Riflemen] were stood at the front. We had all recently joined.

‘Rfn Trewin called out our names and we were told to strip down naked, present ourselves onto a chair and tell our life stories.

‘We had to answer whatever questions they asked us. We were feeling nervous.. There were between 15 and 20 people in the kitchen, all junior soldiers. 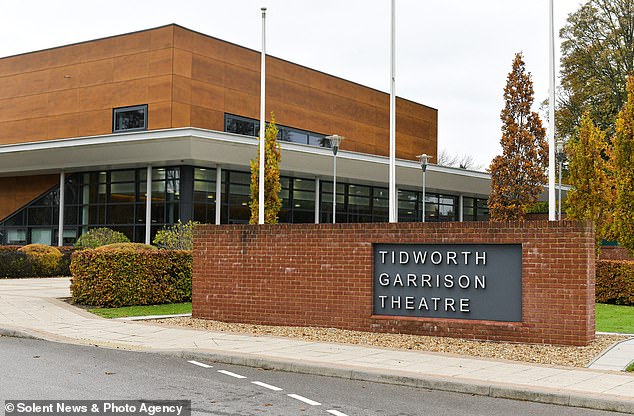 A military court at Tidworth Garrison (pictured), Wiltshire, heard that the ceremony was held behind locked doors in a kitchen at the 1st Regiment, The Rifles barracks in Chepstow, close to the border with England and Wales

‘I was asked to stand on the chair – completely naked – and tell my life story: where I lived, what I had previously done with my life…

‘I was also asked about my ex-girlfriend… her breast size, if she has a nice bum, if she was a nice s***.

‘I was not happy with it. It made me really uncomfortable.

‘Rfn Trewin approached me from the right and slapped my penis. He made fun of my penis and grabbed it for a second with his index finger and thumb and rubbed it slightly for a second.’

Another soldier told the court how, after being subjected to similar ridicule, he was forced to fight a fellow junior soldier whilst still in the nude.

The soldier told the court: ‘We were introduced to an ”ice breaker” in the kitchen.

‘[Rfn Trewin] said, ‘Some of you are quite new so you will need to introduce yourselves’.

‘One by one we took turns to stand on top of the chair, strip down and introduce ourselves.

‘When I was on the chair I gave my name, where I lived and what I did before joining the army…

‘Rfn Trewin then approached me and played with my genitals with his finger for between three and five seconds. I asked him to stop and covered my genitals.

‘[Later on] I also had one boxing fight wearing boxing gloves… [another soldier] was making sure it didn’t go too far – he was the referee of sorts.

‘We were still naked at the time.’

Another rifleman added the doors were ‘locked’ so no one could leave during the naked boxing bouts.

He said: ‘We were told to stand on the chair and strip down naked whilst talking about ourselves… after that we were told to sing a song of our choice.

‘[Later] there was a boxing contest. We were provided with boxing gloves and we were paired up to fight.

‘Everyone in the kitchen watched us fight; Rfn Trewin and [another soldier] were coaching us and encouraging us to be aggressive towards the other person.

‘There were still about 20 people there and they locked the doors so no one could leave. I got knocked to the floor.’

Detailing the ceremony, Commander Peter Barker, prosecuting, said: ‘Rfn Trewin was one of the senior soldiers within the company.

‘There came a time, at half seven or eight o’clock, that the music was turned down and Rfn Trewin and [another soldier] delivered a brief that [soldiers] were not to take any videos or photos.

‘Five or six [soldiers] who had recently joined were identified and proceedings were explained to them.

‘After the ice breaker [one rifleman] says he was told to consume some drink. Having left a few drops in the beer bottle he was punched by Rfn Trewin.’

At the trial Rfn Trewin, who joined the army in 2016, had denied touching the penises of two soldiers and punching another. He pleaded guilty to four other charges – including one of running the ceremony.

Trewin was convicted of all of the offences. He was sentenced to 18 months military detention at the Military Corrective Training Centre in Colchester and dismissed from the military.

Jailing the disgraced soldier, Judge Advocate Andrew Smith told him: ‘[These young soldiers] were new, impressionable, and, above all, they wanted to show they belonged to the unit.

‘There was pressure to go along with the ceremony, and this sort of behaviour is not acceptable.

‘This was described as an ”ice breaker”, but you required them to stand on a chair and tell an audience of up to 20 people about their girlfriends.

‘There were then some naked boxing bouts where two soldiers were paired off against each other.

‘There was an abuse of your position of responsibility as a senior rifleman…. you were looked up to.

‘There is no room for initiation ceremonies in the military.’