A former criminal defense attorney in Pennsylvania who bragged that he thinks ‘like a criminal’ in a cheesy, over-the-top ad that went viral in 2014 admitted in federal court Tuesday that he actually is one.

‘Trust me, I may have a law degree, but I think like a criminal,’ Daniel Muessig had told viewers in the unorthodox video ad promoting his Pittsburgh-based practice – a clear lampoon on the off-color ads offered by fictional defense attorney Saul Goodman in the hit series Breaking Bad and Better Call Saul.

It seems the legal eagle wasn’t just playing a part.

Muessig, 39, pleaded guilty this week in Pennsylvania Western District Court to conspiring with others to distribute hundreds of pounds of marijuana between the months of April and May 2019. The since-disbarred jurist was indicted in July – more than two years after the crimes took place.

He now faces at least five years in prison. 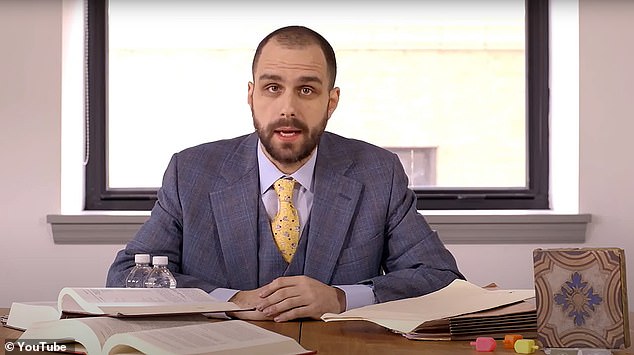 ‘Trust me, I may have a law degree, but I think like a criminal,’ Daniel Muessig told viewers in a 2014 unorthodox video promoting his Pittsburgh-based practice 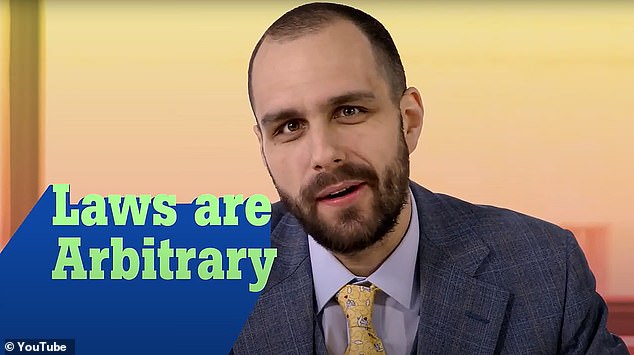 In the 2014 video, which has since been taken down from the original account and had garnered more than a million views, the attorney brazenly says ‘laws are arbitrary’ and that only he understands his clients

Muessig admitted to the court that his apartment served as a stash house and base of operations for a Pennsylvania drug ring, where the disgraced attorney sold marijuana with an accomplice and dealt with other known drug dealers in the area.

Muessig and his accomplice, Hector Rodriguez, were apprehended by police in May 2019 after officers pulled the pair over during the middle of a drug exchange and uncovered $400,000 in boxes they were carrying.

A search of the pair’s property, in Pittsburgh’s Squirrel Hill neighborhood, saw agents uncover more than 200 pounds of marijuana.

Muessig is set to be sentenced in March. He faces a mandatory five years in prison, though he may be able to nix two years off the sentence if he and his legal team can prove to a judge that he was not the ringleader of the drug ring – and that he did not use any weapons during his crime escapades.

Meanwhile, another drug dealer, Eric Vanderslice, Muessig’s supplier Jared Eck and Wayne Barker, who operated the stash house with Muessig and Rodriguez, all pleaded guilty and are also awaiting sentencing. Charges against Rodriguez have yet to be filed.

Muessig, no longer a lawyer, is selling real estate. He did not immediately respond to DailyMail.com’s request for comment.

Muessig alluded to buying copious amounts of cannabis a decade earlier in another public project, prior to his now infamous YouTube ad.

In a strange instance of foreshadowing, the former lawyer, who had a brief stint as a freestyle rapper known as Dos Noun before getting a Juris Doctor degree at the University of Pittsburgh Law School in 2012, references buying ‘one hundred pounds’ of marijuana in a 2011 track titled Street Dreams Weed Schemes.

The track, which is posted on Muessig’s Soundcloud and features the then 29-year-old rapping about smoking weed in a monotone voice, has gone largely unseen, with only 645 views – paling in comparison to his Saul Goodman-esque YouTube project 3 years later, which garnered more than a million.

The colorful video ad features his pals pretending to commit a slew of crimes such as drug-dealing, armed robbery and home invasion, with impunity – thanks to Muessig.

In another prophetic proclamation, Muessig states in the video: ‘I make jail visits – because I’ll probably be there visiting my friends anyways.’

One fictional criminal pauses while climbing out of a window, carrying a laptop to say ‘Thanks Dan,’ to the camera, while a pair of men carrying handguns offer a similar message before pulling ski masks over their faces in the three-minute, 27-second video.

Muessig himself then comes on to declare that laws are ‘arbitrary’ and that criminals should call him when facing legal trouble.

‘America was built on freedom,’ a suited Muessig says in the video behind a desk. ‘Not on a bunch of people with more money than you telling you what you can and can’t do with all their stupid laws,’ he then adds, using finger quotes on the word ‘laws.’

He then posits: ‘Need a criminal defense lawyer? Then you should hire a lawyer who thinks like a criminal.’

‘When you’re charged with a serious criminal offense, you’re facing the fight of your life.’

The video, posted to the then-lawyer’s YouTube account but since deleted, was seen by millions – but drew criticism from his peers. 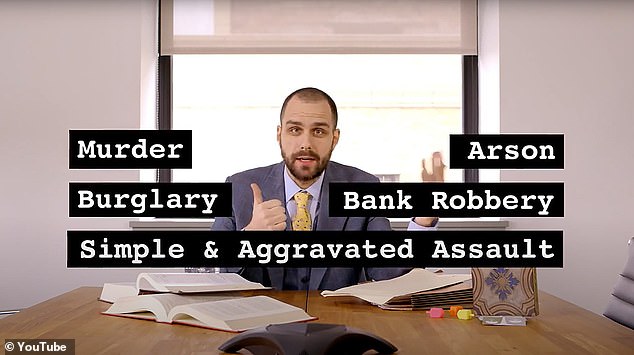 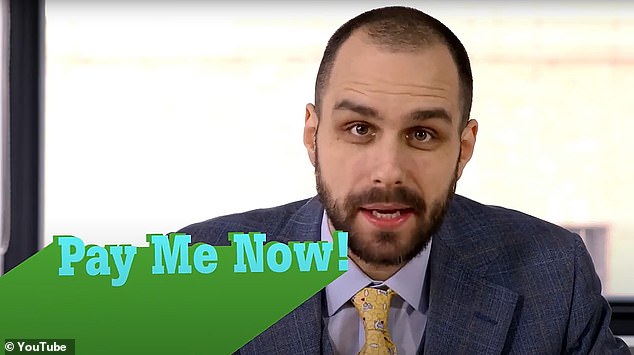 Tom Loftus, spokesman for the Allegheny County Bar Association, said after the ad’s release that he found it ‘insulting to Pittsburgh lawyers and lawyers across the country, who take great pride in their profession.’

In the video, the attorney brazenly states that laws are ‘arbitrary’ and that only he truly understands his clients.

And after his guilty plea this week, it looks as though he was not lying.

Muessig was indicted along with Rodriguez earlier this year, after feds stumbled onto the pair’s operation while investigating other drug dealers in the Pittsburgh area.

During Muessig’s Tuesday, federal prosecutor Kate Jordan revealed that in April of that year, the FBI started wiretapping one of the phones used by Chadlin Leavy, a heroin and cocaine supplier for the Pittsburgh ‘SCO’ street gang who has since been arrested. 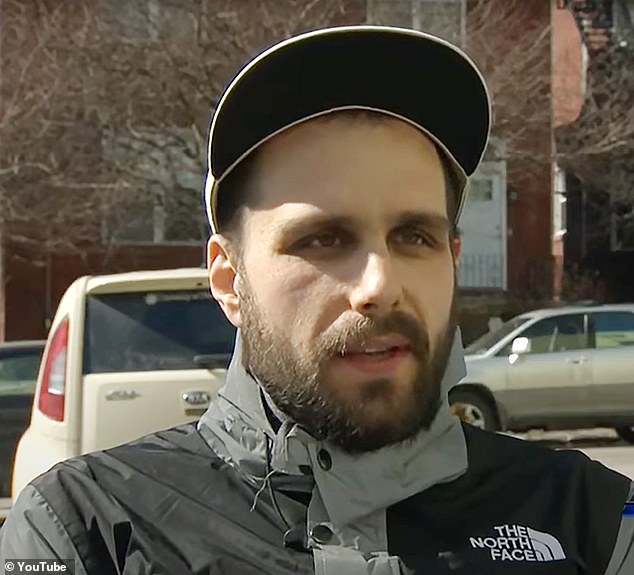 Muessig is set to be sentenced in March. He faces a mandatory five years in prison

The feds’ wiretaps also revealed that Leavy was dealing marijuana – and that his source was another Pittsburgh resident, Jared Eck.

The wiretap showed that Eck resupplied Leavy once a week, on Fridays.

The probe also revealed that prior to meeting with Leavy, Eck would meet up with another man, Wayne Barker, who operated the stash house with Muessig and Rodriguez, to get marijuana.

During the investigation, agents watched Eck and others carry large trash bags containing pounds of marijuana out of the apartment and place them in cars parked on the street.

The wire further revealed that Leavy and Eck were going to meet on May 24, 2019, after Eck met with his weed supplier.

Agents and police then surveilled the area outside the stash house, Muessig’s home, and witnessed the lawyer walk into the apartment carrying a backpack.

Minutes later, Barker pulled up to the property in his vehicle, walked inside with a shopping bag, and subsequently walked back outside to retrieve something he had forgotten from the car and go back inside the apartment building. 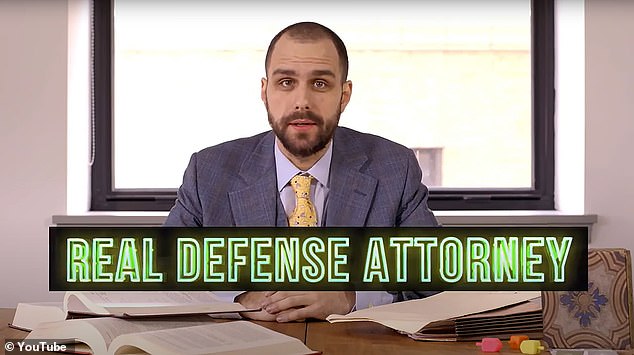 ‘Need a criminal defense lawyer? Then you should hire a lawyer who thinks like a criminal,’ Muessig says in the ironic ad campaign 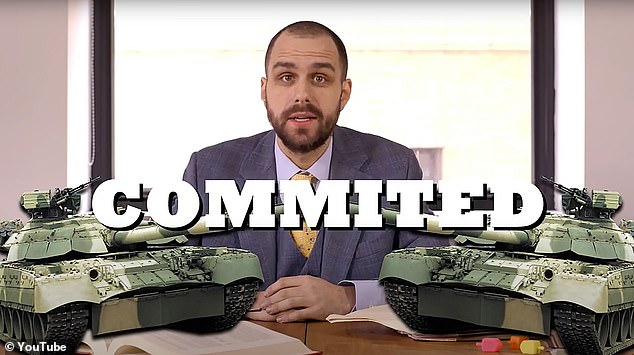 The item Barker retrieved was a vacuum sealer – a device often used to seal large packages of marijuana.

Investigators then saw a Dodge Charger arrive with Rodriguez and another man inside.

The pair then exited the vehicle and met Muessig at the front door of the residence.

At that point, Wayne Barker and his brother, William, came out of the residence as another car pulled up, with another drug dealer, Eric Vanderslice, at the wheel.

The boxes were then unloaded from the car and brought inside Muessig’s house.

Muessig and Rodriguez then left the building carrying two boxes, and put them inside the Barkers’ car, which Vanderslice then drove away.

Investigators then followed Vanderslice, pulling him over.

Upon performing a search on the vehicle, agents found $400,000 in the boxes that investigators saw Muessig and Rodriguez load into the car.

A search of the apartment turned up numerous boxes of marijuana, packaging material, the vacuum sealer and a money counter.

According to the prosecution, the marijuana weighed 404 pounds.

Prosecutors further proclaimed at Muessig’s trial that the former lawman was responsible for the sale and distribution of between 220 and 880 pounds of the drug.