By Neil Sears for the Daily Mail

It is the Duchess of Sussex’s favourite animal charity – praised by her for its ‘commitment to animal welfare and community wellbeing’.

But pet specialists at the Mayhew Trust are now fighting like cat and dog over claims of wasted money, falling standards of animal care, and even allegations of bullying, racism and homophobia.

Its very future, bosses have warned, could be ‘in jeopardy’. 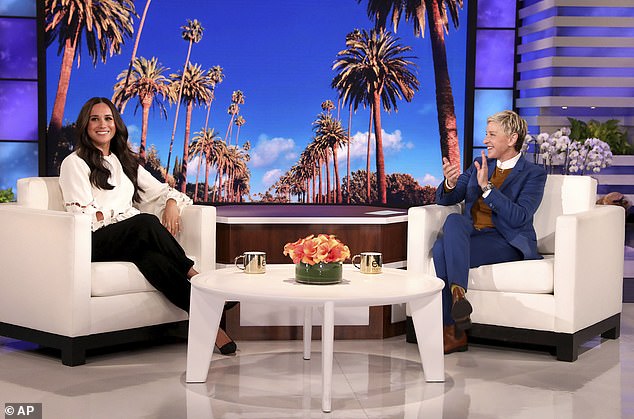 A favourite charity of the Duchess of Sussex (pictured during an appearance on talk show ‘Ellen’ this week) now fighting like cat and dog over claims of wasted money, falling standards of animal care, and even allegations of bullying, racism and homophobia

Meghan, who is patron of the charity, often speaks out about the importance of diversity and mental wellbeing.

She is so keen on the Mayhew that she undertook a ‘secret’ trip to the sanctuary for cats and dogs last January before leaving the UK for Canada.

She also made an official visit while pregnant with son Archie in 2019. At its premises she has cuddled pets and chatted with staff and volunteers.

Yet union representatives from the Mayhew, which runs kennels in north-west London, are now balloting for strike action over its treatment of staff and concern for the animals.

The charity had a total income of £3.1million last year, almost half in donations and a similar sum from wills. However, staff numbers are said to have been reduced from 58 to 49.

Bitter employees point out that at the same time as it is cutting jobs, the charity has been advertising for an £80,000-a-year ‘head of engagement’. 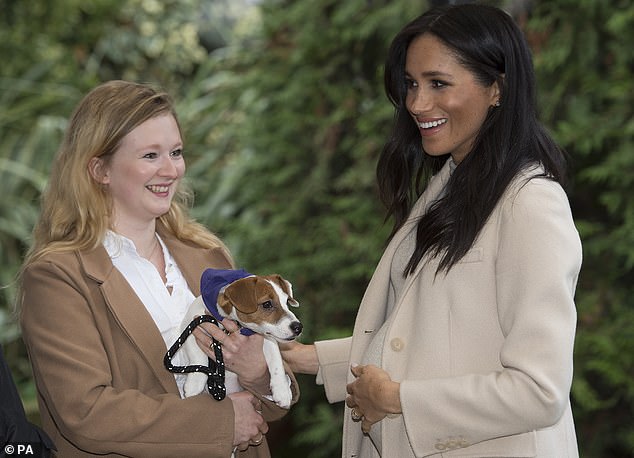 Pictured: The Duchess of Sussex meets Maggi, a Jack Russell,  during a visit to Mayhew, an animal welfare charity supports as patron, at its offices in north-west London (file photo)

One former member of staff told the Daily Mail: ‘That money would pay for four staff actually to care for animals. It’s such a kick in the teeth.’

The whistleblower also claims that one senior staff member referred to a junior worker who wore glasses as ‘Speccy Four Eyes’, called an Asian woman ‘Old Slitty Eyes’ and scoffed at a gay man’s talk of his husband, as well as a lesbian couple’s plan for a child.

The same person was said to have admitted provocatively ordering steak in front of vegan and vegetarian workers at work social events. The whistleblower added: ‘This person was racist, sexist, homophobic. I reported it but nothing was done.’

Volunteer Judy Stapleton, who has helped out there for seven years, claimed ‘bullying’ had driven out key workers. 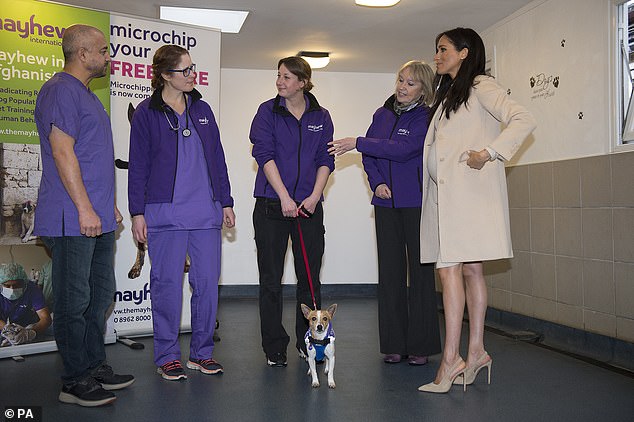 Meghan, who is patron of the charity, often speaks out about the importance of diversity and mental wellbeing. She is so keen on the Mayhew that she undertook a ‘secret’ trip to the sanctuary for cats and dogs last January before leaving the UK for Canada

She added: ‘The atmosphere there is just so sad. Why are they getting rid of these dedicated staff? I think there is an element of the Mayhew getting caught up in celebrity instead of focusing on being a small, local community charity.’

The Mayhew, founded in 1886, finds new homes for dogs and cats, and runs an animal clinic in Kensal Green.

A charity spokesman said it had carried out a necessary restructure and added: ‘Any staff strike action would significantly affect the charity’s ability to care and treat the sick animals.’ The charity ‘refutes any allegations of poor animal welfare’.

In June, Meghan wrote an introduction to its glossy annual review, saying: ‘Mayhew continue to meet us where we are as a society and foster the healing connection between animal and human.’