Jurors ended a third day of deliberation in the Kyle Rittenhouse double murder case showing no sign that they are any closer to reaching a verdict.

Judge Bruce Schroeder sent the seven women and five men home, repeating his mantra that they should not discuss the case with anyone.

One female juror asked if she could take the jury instructions home with her. Defense counsel Mark Richards vigorously shook his head urging Schroder to deny the request.

But after several seconds thought, Schroeder agreed that they could.

After the jurors had left for the day Schroeder remarked that it proved that it was ‘a bad habit to ask the jurors if they had any questions.’ 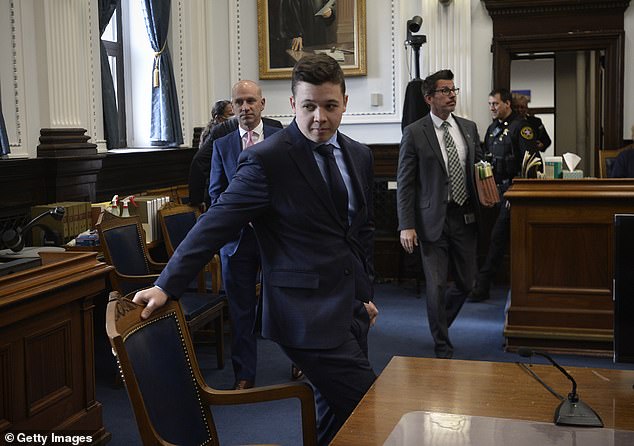 Kyle Rittenhouse, center, pulls out his chair for a meeting Judge Bruce Schroeder called during his trial at the Kenosha County Courthouse on November 18, 2021 in Kenosha, Wisconsin 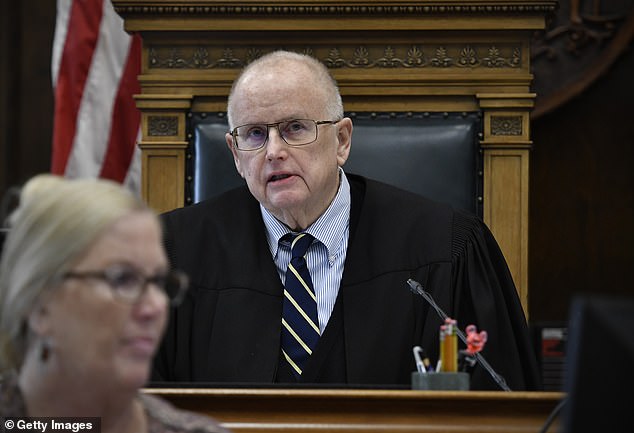 Judge Bruce Schroeder alerts the attorneys that a man claiming to be with a major news network was arrested the previous night during Kyle Rittenhouse’s trial at the Kenosha County Courthouse on November 18, 2021 in Kenosha, Wisconsin 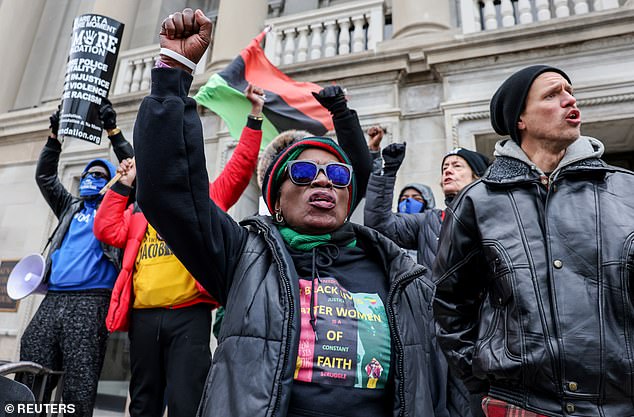 Richards said his worry was that it could lead to jurors looking in dictionaries in a bid to parse the words of the instructions. Schroeder ruled that the jurors should not take their notes home.

The jury has now been out since Tuesday morning, wrestling with the guilt or innocence of Rittenhouse, who shot two men dead and injured a third during a riot in Kenosha, Wisconsin in August 2020.

Protestors both supporting him and calling for him to be found guilty have gathered daily on the courthouse steps. Largely they have been peaceful although two people were arrested on Wednesday after a scuffle.

A man was also held on Thursday.

The main excitement of the day outside the court came when a man who has previously only been identified as ‘Maserati Mike’ turned up and admitted he is a fired police officer from Ferguson, Missouri, the site of race riots in 2014.

Jesse Kline was not on the force during the riots and was fired in 2018 after being charged with stalking a woman and threatening her male companion by poking a handgun into his chest.

Kline had turned up in a black Maserati on Tuesday with an assault weapon which police told him to put away as carrying a weapon in the area outside the courthouse is illegal as it is within 1,000 ft. of a school.

On Thursday he was carrying a large bag which looked as if it could carry the same weapon. When protestors urged him to show what was in the bag, he pulled out a large sex toy and waved it around. 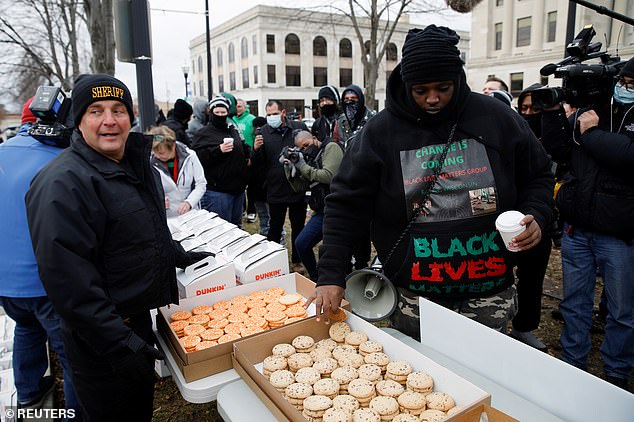 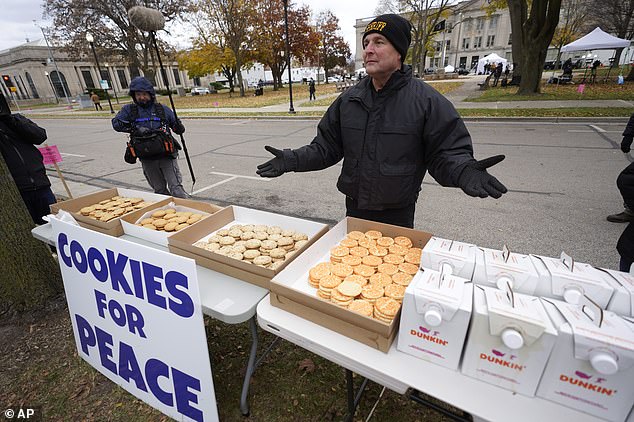 A spokesman for the sheriff’s department told DailyMail.com the coffee and cookies were a ‘goodwill gesture in the hopes of reducing tensions’. ‘It seemed to work,’ they said 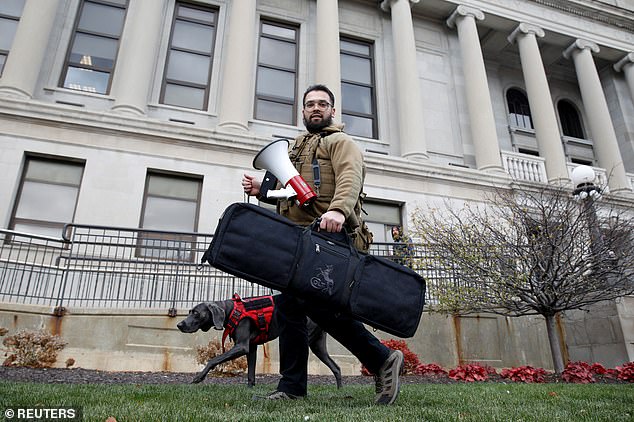 A protester who previously called himself Maserati Mike, but has now identified himself as Jesse Kline, carries a Colt rifle bag as he walks with a dog outside the Kenosha County Courthouse, during the trial of Kyle Rittenhouse, in Kenosha, Wisconsin, U.S., November 18, 2021

The Kenosha County Sheriff resorted to dishing out ‘cookies for peace’ and cups of coffee at the courthouse on Thursday in a desperate effort to keep the crowds calm as the nervous wait for a verdict in the Rittenhouse trial rumbled on.

Sheriff David Beth – who failed to contain the riots last year after his 116 deputies were overrun by more than 1,000 protesters – was at the courthouse on Thursday as the jury deliberated the teenager’s fate for a third day.

He was pictured approaching BLM protesters and Rittenhouse supporters, offering them cookies and a warm drink, in an effort to keep the peace.

‘The Sheriff wanted to extend a goodwill gesture to the community in hopes that it would reduce tensions among the folks outside the courthouse and bring people together.

‘It seemed to work from what we were seeing,’ a spokesman for the force told DailyMail.com on Thursday.

His efforts weren’t entirely successful. One man was arrested after showing up with a gun, a felony because it is within 1,000ft of a school. Yesterday, a man and a woman were arrested at the court and charged with disorderly conduct.

There is yet to be any violence beyond that, but tensions are high and rising.

Five elementary schools announced on Wednesday night that they are going remote for the rest of the week to keep kids off the streets in case of any unrest. 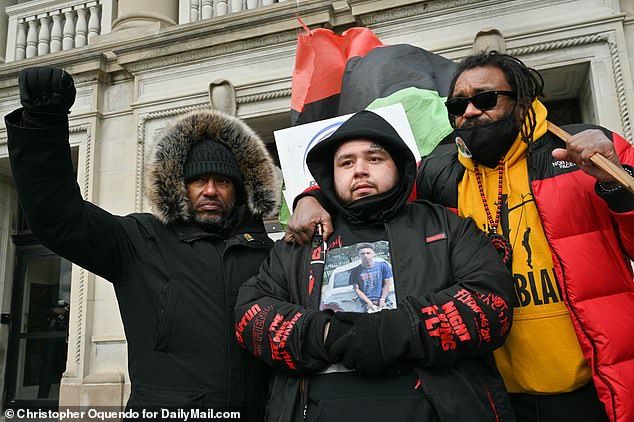 Bishop Tavis Grant (left), Jacob Blake’s uncle Justin Blake (right) and Daunte Wright’s brother Damik Wright (center). Damik told DailyMail.com: ‘Wherever there is police brutality we are coming and will stand in solidarity with them’ 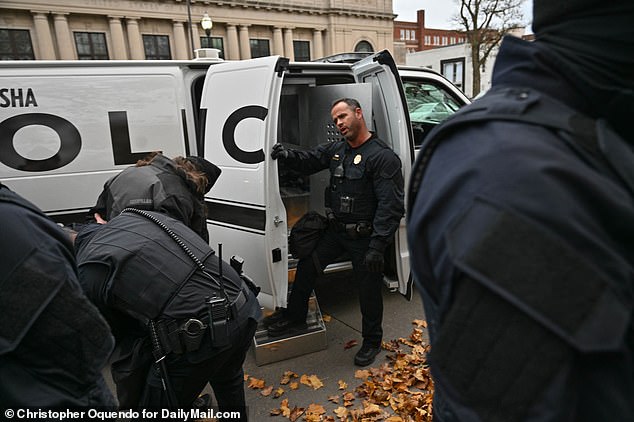 The man is the only person who was arrested on Thursday. Two protesters were arrested on Wednesday for disorderly conduct 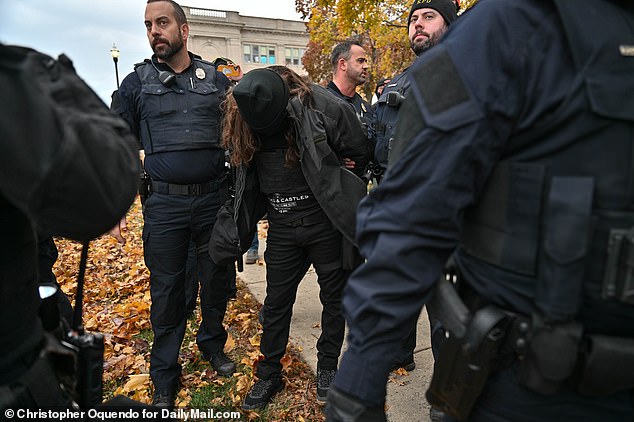 Frank Elementary School, one of them, said in a Facebook post on Wednesday: ‘We will switch to virtual tomorrow and Friday as a precaution.

Our attendance area includes the homes surrounding the Kenosha Courthouse. Students log on at 8:15am with their teachers and crews.’

There are 500 National Guard troops now on standby 60 miles away from Kenosha in case any tensions arise.

Last August, Sheriff Beth found his force under siege when hundreds of protesters rushed to their small town after the Jacob Blake shooting. Kenosha Police Department, which had fewer than 200 officers at the time, was equally under outnumbered and the town begged for help from the Governor, but got only a few hundred National Guard troops at first.

Among those at the courthouse on Thursday was Daunte Wright’s brother Damik Wright who told DailyMail.com: ‘Everybody is boots on the ground regardless of whether its Mexico or Canada we are coming. It’s not just with one family.

‘Wherever there is police brutality we are coming and will stand in solidarity with them,’ he said.