Civil rights activist and former San Francisco 49ers quarterback Colin Kaepernick has called Kyle Rittenhouse a ‘white supremacist’ after the 18-year-old was found not guilty at his murder trial in Kenosha, Wisconsin on Friday.

‘We just witnessed a system built on white supremacy validate the terroristic acts of a white supremacist,’ Kaepernick tweeted after the verdict was revealed. ‘This only further validates the need to abolish our current system. White supremacy cannot be reformed.’

Rittenhouse was acquitted of all charges after pleading self-defense in the deadly Kenosha shootings that became a flashpoint in the debate over guns, vigilantism and racial injustice in the US. 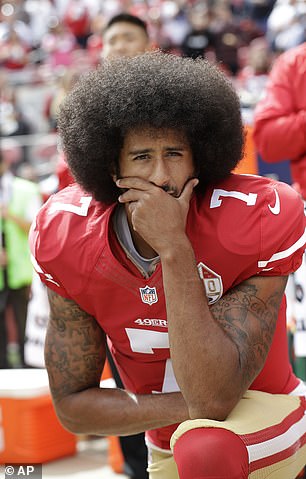 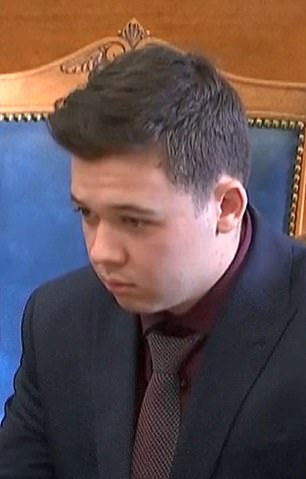 Civil rights activist and former San Francisco 49ers quarterback Colin Kaepernick (left) has called Kyle Rittenhouse a ‘white supremacist’ after the 18-year-old was found not guilty at his murder trial in Kenosha, Wisconsin on Friday

The verdict in the politically combustible case was met with anger and disappointment from those who saw Rittenhouse as a vigilante and a wannabe cop, and relief and vindication from those who regarded him as a patriot who wanted to stop lawlessness and exercised his Second Amendment right to carry a gun and to defend himself.

Kaepernick was not the only athlete to condemn the verdict.

Chiney Ogwumike, a star player for the WNBA’s Los Angeles Sparks, called on social justice advocates to continue to protest: ‘Yet again, a necessary reminder that social justice is not a moment, it is a movement.’

Robert Griffin III, another free agent quarterback, referenced the case of Julius Jones, whose death sentence for murder was commuted in Oklahoma this week. Jones, an African-American inmate, was scheduled to be killed on Thursday for the 1999 shooting death of Paul Howell. His sentence was commuted to life in prison, although many still maintain that he has been falsely accused.

‘Kyle Rittennhouse can kill without a sliver of doubt & walk free but Julius Jones is in jail for life without the chance for parole after being on death row for 20 years with all types of doubt in his case,’ Griffin tweeted. ‘What is Justice? God help us.’

African-American NASCAR driver Bubba Wallace also weighed in: ‘Ha, let the boy be black and it would’ve been life…hell he would’ve had his life taken before the bulls*** trial.. sad’

Memphis Grizzlies star Ja Morant wrote that he was ‘not surprised at all.’

Kaepernick has been the face of athlete activism since 2016, when he famously began protesting racism and police brutality by kneeling during the national anthem before NFL games.

He has remained a free agent since March of 2017, sparking accusations that the NFL has colluded to blackball Kaepernick, who has since settled a grievance with the league for an undisclosed amount.

The former University of Nevada star continues to train in hope making a comeback.