A man who killed a club patron, kicking his head ‘like a soccer ball’ before stomping on him, has won a cut in his ‘manifestly excessive’ jail term.

Ryan Paterson pleaded guilty to the manslaughter of Jayden Mason, 21, who suffered severe traumatic brain injury after being bashed on the NSW Central Coast in June 2017.

Paterson, who was 34 at the time, was jailed in March 2020 for 16 years and six months, with a non-parole period of 12 years and five months. 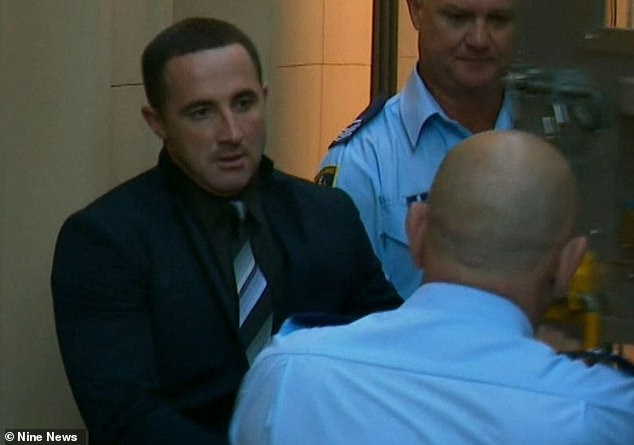 Ryan Paterson pleaded guilty to the manslaughter of Jayden Mason, 21, who suffered severe traumatic brain injury after being bashed on the NSW Central Coast in June 2017

The NSW Court of Criminal Appeal on Friday concluded his term was manifestly excessive, re-sentencing him to 12 years with a non-parole period of nine years.

The court also found the sentencing judge erred in characterising Paterson’s offending as being at the ‘highest end of culpability’.

His co-accused, Benjamin O’Brien, 28 at the time, also pleaded guilty to manslaughter.

According to the agreed statement of facts, Mr Mason was ejected from the Wyong Leagues Club at 9.50 pm on June 24 after becoming agitated and increasingly abusive towards staff.

As he was walking away, Paterson and O’Brien, who also had been drinking, alighted from a courtesy bus opposite the club.

They walked towards Mr Mason who had been abusive to the bus occupants, before trying to punch him.

But he ran away, zig-zagging across the roadway before trying to flag down two cars as he was chased by the two men.

O’Brien arrived first and punched Mr Mason who fell to the ground, before a third man grabbed O’Brien.

Paterson then ‘kicked the deceased to the head like a soccer ball’ who was ‘unconscious after the attack’, kicked him to the head a second time and then stomped on Mr Mason’s head with both feet.

He was left lying in the bicycle lane and a car collided with him, probably dragging him along the road.

At the time, Paterson was on parole for recklessly causing grievous bodily harm involving him stomping on that victim’s head and leaving him by the roadside in 2008.

The Appeal Court said that serious as it was, Paterson’s conduct ‘did not warrant any characterisation of it as something close to or towards the worst category of manslaughter’.

In re-sentencing, the three judges started at a term of 16 years – instead of the 22 years originally indicated – before allowing a 25 per cent discount for his guilty plea.

‘The applicant inflicted savage violence on Mr Mason when he was effectively defenceless and any threat or offence from his behaviour had dissipated,’ they said.

‘This was clearly a very serious example of manslaughter by unlawful and dangerous act.

‘On any view the applicant’s conduct was more serious than O’Brien’s and his subjective case was worse such that any sentence imposed on the applicant must exceed that imposed on O’Brien.’